Back in December 2002, Google launched a small feature called Froogle. It wasn’t a revolutionary idea by any means. There were already numerous sites at the time that allowed consumers to compare prices from multiple vendors on the same item.

However, Froogle — which is now Google Shopping — had access to the indexing power of Google. So it slowly grew in traffic. Merchants could list their products for free, and then ensure those products were indexed and optimized accordingly. This continued for nearly a decade, until 2012, when Google announced that listings in Google Shopping would become “pay to play” — listings were no longer free.

Since this change, Google has continued to improve Google Shopping. Here are two recent releases that should help ecommerce sites.

Google’s Customer Match allows you to upload a list of customer emails and Google will match them with registered Google accounts. This is an audience in an AdWords account. You can target or exclude these people. Customer Match has been available for search and display campaigns for some time, but it will soon be available to all Shopping campaigns.

How to use it? It depends on your business. Here are a couple of ideas.

Remember, however, that if you create a Shopping campaign just for these repeat customers, you will likely want to exclude them from other Shopping campaigns to prevent the offers from competing with each other.

The Customer Match feature is currently available in open beta — you must apply to use it. Alternatively, watch for general availability later this year. 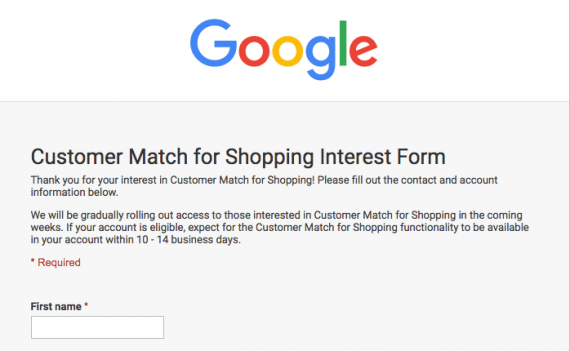 Google Shopping’s Customer Match feature is currently available in open beta — you must apply to use it.

Thanks to the sharp eyes of the team at CommerceHub, an ecommerce vendor, we see that Google is testing a new filter that accompanies Shopping ads. Take a look. 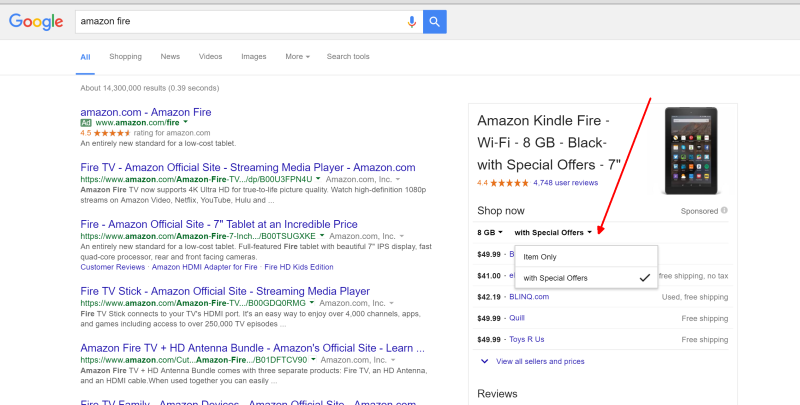 Google is testing a new filter that appears on Shopping ads, for advertisers with “Special Offers,” as shown on the second drop-down menu, on the right. Click image to enlarge. (Source: Search Engine Land.)

This is a basic search for “amazon fire,” with a single text ad from Amazon.com — a good job, by the way, by Amazon’s pay-per-click team for covering the bases on brand searches. On the right side there’s a large Shopping ad format with two drop-down choices. The first is storage size, with either an 8 GB or 16 GB version. That makes sense.

The second drop-down menu defaults to “with Special Offers” and the additional choice of “Item Only.” This seems subtle. But if we look deeper it’s important.

This example shows the power of a default option when consumers are making choices. The drop-down filters aren’t designed to jump out. Most searchers probably won’t notice them. That means the default option will be seen by a higher percentage of users. In this case, that means items without a special offer just got bumped.

Editor’s Note: This article was updated on July 12, 2016, removing the reference to uploading phone numbers for Customer Match.