I’ve previously written about why you should make Google’s Product Listing Ads a priority. If you’ve followed my advice in “Cheaper Clicks from AdWords Coming?” and, more recently, “5 Steps to Prepare for Google Shopping,” there’s a good chance you’ve observed a sharp increase in pay-per-click revenue and profits.

For those of you who have yet to treat Product Listing Ads — PLAs — as a priority, however, this article is for you.

According to data at my firm, revenue and traffic from PLAs is surging across the board. Surprisingly, however, we’re finding that PLA cost-per-click fees can be up to 50 percent cheaper than traditional text ads.

For a retailer of home products, we compared the performance of its PPC campaign over the past three months to the same period last year. As the table below shows, cost decreased dramatically while revenue and profit surged more than 159 percent. While PLA traffic did not convert as efficiently as traditional text ads, average cost-per-click was cut in half, which more than made up for the lower conversion. In total, PLAs grew to generate 58 percent of PPC revenue, compared to 21 percent last year. 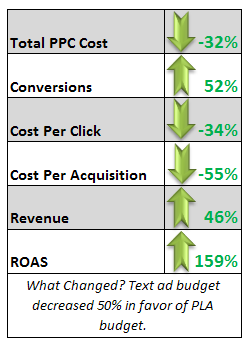 PLAs show a much higher return on investment than text ads.

These positive results were due in large part to one major change: growing its budget for PLAs to 58 percent of the total PPC amount.

Another retailer, which sells brand-name apparel, experienced similar results. Last year, 100 percent of its PPC revenue came from traditional text ads. Now, 74 percent comes from PLAs, despite accounting for only 26 percent of its total PPC budget. This retailer doubled its PPC revenue without increasing its budget, thanks to the whopping 1,743 percent return on ad spend its PLAs now receive. 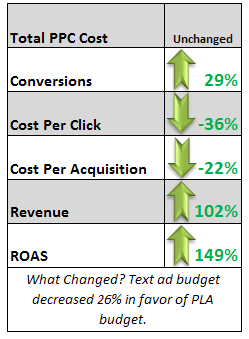 Rebalancing an advertising budget can have significant effects.

These results show that total campaign performance can be improved dramatically by shifting even a modest percentage of total PPC budgets into PLAs.

Why Are PLAs Cheap?

We think the primary reason PLAs are so much cheaper than text ads is that they are new, and competition is low because most online retailers have not caught on. Eventually other retailers will participate, but that will take time. In the meantime, online retailers that take advantage of PLAs now can generate a lot of new and very profitable sales during this year’s holiday season.

While we have observed many cases that resemble the two examples above — where merchants were able to dramatically increase revenue at lower costs — PLAs will not always perform as well for every site and for every industry. In some industries, as illustrated by the next example, the competition understands the value of PLAs, and PLA costs per click can actually be higher than text ads.

This merchant, which sells athletic products, experienced costs per click for PLAs that was 17 percent higher than text ads. The merchant’s PLA campaign still achieved a return on ad spend of 1,065 percent, which was profitable, but not as high as the 1,731 percent return from text ads. Despite this, the PLAs did contribute to a tripling of conversions compared to the same period last year. While the campaign wasn’t as profitable on a per-unit basis, PLAs enabled the merchant to increase its market share.

Google is not emphasizing organic listings due to PPC extensions like PLAs, Offers, and Site Links. A recent Google search returned these results. 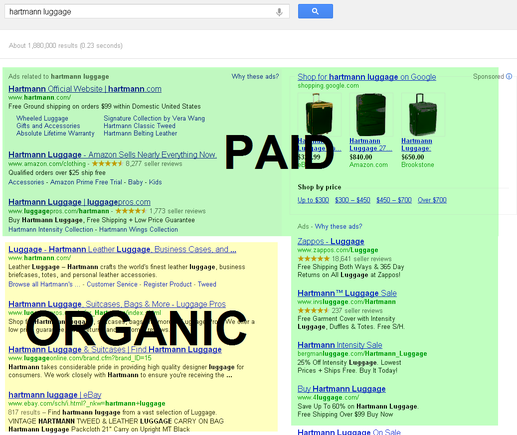 As you can see, above-the-fold search results are dominated by paid listings. The release of Google Shopping in October will likely lessen the visibility of organic listings, which means that text ads and PLAs will become more important. Organic rankings are still critical because users typically trust them more — and still click on them at a high rate — but paid ads are clearly becoming more important.

From the beginning, Google claimed that paid search results — similar to Google Shopping — resulted in a bad user experience. The implication was that websites should not be able to buy their way to the top. But clearly Google’s philosophy is changing.

While every industry, merchant, and campaign will experience different results, the overall market for PLA clicks is underdeveloped. There is significant value here that many merchants are failing to realize. If Google drastically increases PLA traffic in October with the release of Google Shopping, the merchants who take advantage of PLAs will be well-rewarded this holiday season, and beyond.