Paid Search: Can Anyone Challenge Google?

We can end the suspense right now. It’s not likely that any other company is going to be a real contender in paid search anytime soon. The Search Alliance formed by Microsoft’s adCenter and Yahoo! makes Bing the default search engine on Yahoo! pages. Although Microsoft has spent a good deal of money, it has made little headway in wresting market share from Google. In August, Internet users conducted 64.8 percent of overall U.S. searches on Google, according to comScore. During this same period, Bing garnered 14.7 percent. The Yahoo! site was at 16.3 percent. The Ask Network and AOL together took the remaining 4.3 percent of the market.

In the second quarter of 2011, while holding 65.5 percent of the overall U.S. search volume, Google did an excellent job of monetizing its searches — accounting for 83 percent of U.S. ad spending and 82 percent of click share.

However, Bing and Yahoo! showed a higher click through rate — 1.55 percent in Q2 2011 — better than Google’s 1.34 percent, according to Marin Software’s Paid Search Quarterly Benchmarking Report — available here as a PDF.
For the same period, revenue per click was about the same with Google at 80 cents, and Yahoo!-Bing at 81 cents. On an annual basis, large advertisers (over $1 million annually) increased spending on paid search by 20 percent, and improved click-through rates by 12 percent.

For the six months ended June 30, 2011, Google’s ad revenue contributed 97 percent of the company’s total revenue. Google websites earned $12.1 billion (69 percent of all search revenues) in search and display ad revenues for the first six months of 2011 and Google Network members earned $4.9 billion (28 percent of all revenues) for a total of $17.6 billion. Net income was $31.1 billion.

eMarketer estimates that paid search in the U.S. will contribute $10.22 billion to Google’s coffers in 2011. Total U.S. search spending will be $13.59 billion, meaning Google will have over 75 percent of the market. eMarketer projects Google’s share will grow to 76.6 percent in 2012.

Microsoft’s Online Services Division (OSD) encompasses Bing, MSN, and adCenter. For the full fiscal year 2011 that ended June 30, 2011, OSD had revenues of $2.5 billion. Online advertising — both display and search — contributed $2.3 billion to the total. However, OSD suffered an operating loss of $2.6 billion. While Google is immensely profitable, Microsoft is racking up big losses in online advertising, although advertising revenue did increase $358 million or 19 percent over 2010. 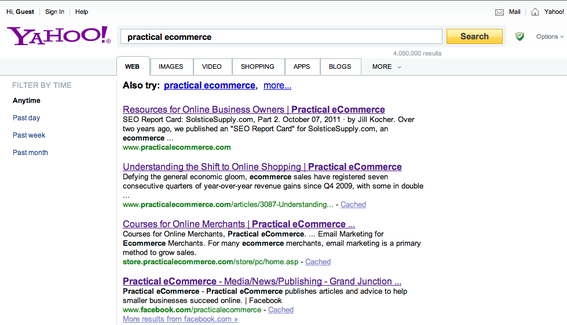 Although Bing is the default search engine for Yahoo!, the company still reports paid search revenue because not all international markets have transitioned to Bing. Microsoft paid $55 million to Yahoo! in the second quarter for transition cost reimbursements. Based on the terms of the search agreement between the two companies, Microsoft receives a revenue share of 12 percent of the net search revenue generated by Yahoo! Properties and affiliate sites in transitioned markets.

For the six months ending June 30, 2011, Yahoo! took in $921.8 million for search and $1 billion for display ads. For the full calendar year, eMarketer projects $1.1 billion in paid search for the U.S. market.