The observer is Harley Finkelstein, chief platform officer with Shopify, the hosted shopping cart. His installment of “Innovators and Trendsetters” this month revolves around seasonality and how merchants can capitalize on seasonal trends.

Practical Ecommerce: Our first installment of “Innovators and Trendsetters” is on the topic of seasonality. You have some thoughts on seasonality, how merchants can take advantage of seasonal topics.

Harley Finkelstein: A lot of online retailers are searching for new ways and new tactics to not only get eyeballs to their site but also to get some general attention. Something that I’ve been noticing over the last couple of years is that there are two categories of ecommerce sites that utilize seasonality almost as a competitive advantage.

First, some sites are built around seasonality entirely. That is their entire business model. They’re up for Mother’s Day, perhaps they’re down until Christmas, and then maybe Halloween they come back up, and then they’re back up Valentine’s Day.

Second, other sites are there throughout the year and time a lot of their marketing pieces and many of their campaigns with a certain event — whether it’s the Super Bowl, Mother’s Day, or Father’s Day. We’re seeing a lot of great success from stores that are utilizing the timing and the seasonality.

PEC: Have you seen sites that have launched around a specific seasonal event or a specific special event and then go down?

PEC: You have three examples of sites that use seasonality well.

Finkelstein: The first is a really interesting site, Ice.com. They’re one of the largest online jewelers. It’s very compelling, one I’ve been looking at for quite a while.

He was able to generate some amazing content. They had this really amazing marketing push not just from other sites talking about Pinny’s interviews — which helped from an SEO perspective — but they really created a lot of energy around Valentine’s Day. Even if you go to Ice.com today, one of the first things you see is it says “Get more face time with Dad” — the current campaign with Father’s Day. When Father’s Day passes, they’ll be looking for something else. Maybe it’s the 4th of July, maybe it’s Labor Day, or Halloween or Christmas. But this is a really amazing store; they view seasonality in a very compelling marketing sense. It’s a great example of a strong retailer that uses seasonality more so in their marketing.”

Finkelstein: If you go to Royalbreakfast.com, you can see a very funny site. A lot of humor. What these guys did was, it says, ‘The Royal Breakfast Company proudly presents special Kate’s and Will’s Royal O’s.” They took Cheerios-like cereal and corn flakes or similar cereal and branded the cereal box around the Royal Wedding. 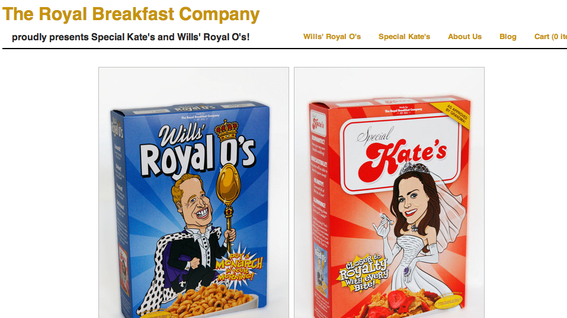 This is different than Ice.com in that seasonality isn’t just a marketing piece for them. It is the core. It is their business model. They look for particular events like the Royal Wedding, and they created a product around that. The benefits are, one, a lot of people are talking about this. A lot of news outlets and blogs and a lot of industry experts are looking for clever and cool things happening around the Royal Wedding. This is unique, so immediately these guys got a lot of attention because they were doing something different.

Second, in the days preceding the Royal Wedding, they had a tremendous amount of sales because people were googling “Royal Wedding,” looking for clips and news articles. This site came up time again to the extent they were able to gather hundreds of Facebook likes around this.

Now, after the wedding, I guess the question you would ask yourself is, “What happens now?’ The Royal Wedding is over. It isn’t headline news anymore. But this site is still up, and I assume that they’ll probably leave it set up for quite some time. Sites like the Royal Breakfast Company, they’ve made seasonality their entire business model and have done so in a very compelling way.

PEC: The owners of Royalbreakfast.com were able to spread the word fairly quickly.

Finkelstein: I agree. Right on the site’s front page, you see how many Facebook likes and how many tweets. Social media certainly plays a large role, but not just social media. Websites that cover interesting stores and products will talk about Royalbreakfast.com. You almost create an affiliate model for yourself. If I’m sending a tweet out about Royalbreakfast.com and my followers and people that check me out online see that, they may then go ahead and check out the site as well.

PEC: Let’s move on to the third example.

Finkelstein: The third example [is a game site], Angry Birds. I think it’s the number one grossing iPhone iOS app or game. There’s a huge cult following around Angry Birds. It’s difficult to win but very easy to play. I’m a big fan of the guys over at Rovio and Angry Birds. 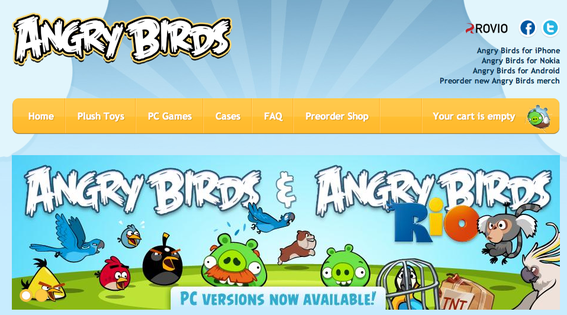 PEC: Some of the changes that you’re referring to involve development time to make those changes or to alter a site to capture a seasonal trend or a seasonal event. How is a smaller merchant supposed to do that?

Finkelstein: You don’t need to be Ice.com and have a huge payroll and have a huge staff and a lot of money to have great-looking sites. The barriers to entry have decreased in ecommerce to the extent that you can buy one theme, for example, on a hosted platform that allows you to change products and change headers and images. You’d be very surprised how easy it is to modify and move from one season to the next.

PEC: You have some tips for our readers for capitalizing on seasonality trends.

Finkelstein: One of the things that is interesting is novelty. Just changing your banner and the color is cheap and easy. Making very small modifications, such as changing color, can add a lot of novelty and add more engagement from customers.