The observer is Harley Finkelstein, chief platform officer with Shopify, the hosted shopping cart. This month’s installment of “Innovators and Trendsetters” focuses on three unique sites, and the implications they may have for ecommerce.

Practical Ecommerce: Tell us the three innovative sites that you want to talk about this month.

Harley Finkelstein: “The first case study is Manpacks.com. The second one is Empty My Apartment! The third one is Threadless.com.

“My idea for these sites is to show how ecommerce users have started using the concept of online retail in some very interesting unique ways, and more importantly that by using these techniques and this new business model you’re able to do some really cool things that simply were not available in the traditional brick-and-mortar retail setting.”

PEC: Let’s start with Manpacks. What is unique about that business?

Finkelstein: “Manpacks is an automated delivery of underwear, socks and other essential men’s products. Effectively, this company was built out the idea that men really don’t spend too much time thinking about their underwear and their socks. This is a subscription-based service that allows you to receive recurring delivery of underwear and socks and basic white t-shirts to the extent that you effectively don’t ever need to buy these things again. 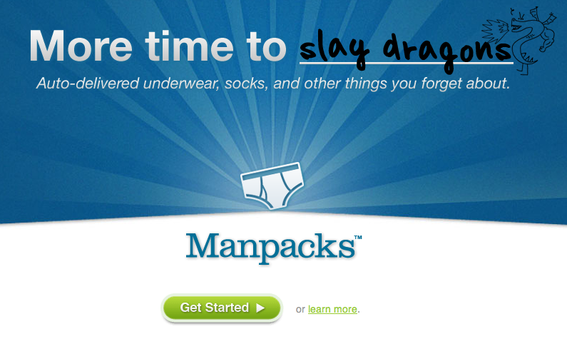 “The idea is that when you go into a traditional brick-and-mortar store, you buy a pair of underwear and you buy a pair of socks, the entire transaction begins and ends in that store. When you leave the store, the transaction is terminated and if you want to buy additional socks or underwear, you have to go back and buy it again. In contrast, with this methodology, because they’re using an ecommerce platform that allows you to continuously reorder, it’s kind of like having your man essentials on autopilot. I think it’s a very compelling business model.”

Finkelstein: “Absolutely. From a revenue perspective, there are effectively two ways to raise your revenue: either you have more customers come into your site purchasing products, or you stay consistent in terms of the number of customers but you make sure that their ARPU — average revenue per user — is increased. The nice part about Manpacks is these subscription-based retail concepts are really only available in an online context. They’re able to go ahead and increase that ARPU because rather than selling one pair of underwear, one pair of socks, one t-shirt, a consumer can effectively purchase six months’ worth and every month have that delivered.

“I don’t know the ins and outs of Manpack’s finances, but I can tell you that they’re continuously adding new customers and getting more eyeballs on Manpacks.com. Concurrently they’re making sure that their average revenue per user is going higher; it’s a recipe for success. The idea of subscription-based products or automating delivery of certain products is a very compelling business proposition.”

PEC: Let’s move on to your second example today, which is Empty My Apartment!.

Finkelstein: “This is a guy named Brian. He’s been living in Texas. He’s moving to San Francisco and he initially had contemplated moving all his stuff — including his car, furniture, television sets — from his apartment in Texas to San Francisco. He realized that obviously moving tends to be fairly expensive. In his case, it was even prohibitively expensive . He’d have to drive his car to the west coast.

“So, he began to think of what he could do. The initial idea was that he’d set up a garage sale where he just allowed local people to sort of come to his house and purchase these things. He was directed to look at things like Craigslist. The problem was, there’s no guarantee that when you make these appointments with people they’re going to show up, and it tends to be very time consuming. 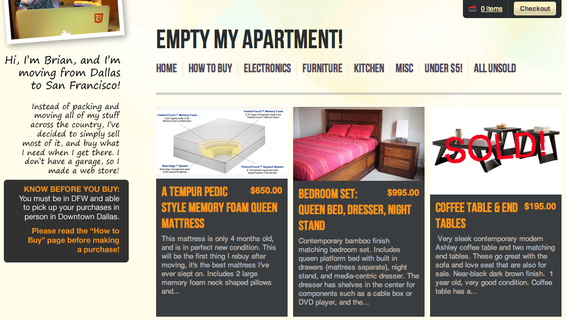 Empty My Apartment! (cached) is a limited, one-time use of an ecommerce site.

“So, Brian took a different approach to it. He found that on Craigslist, it’s difficult to figure out the quality of different items. He felt like he had to really drop down his prices in order to sell. So, rather than listing his stuff on Craigslist, he created a very simple website, Empty My Apartment! He created this very creative solution as a tool to sell all these things. Last time I checked, I think he has sold about 50 percent of all the items on the site. Most importantly, it took him about an hour to get set up on the site. He did use Shopify — the company I work for — in the interest of full disclosure. He used a very simple template as the front-end of his store. It looks great, very easy and as soon as he sells off the products, presumably he’ll just take the store down and de-list it.” [Editor’s Note: Empty My Apartment! has since been taken down. Brian apparently sold all of his items.]

PEC: How does he get visitors to the ecommerce store?

Finkelstein: “That’s very interesting. A couple of different ways. He has talked to a couple of different blogs about what he’s doing. That’s produced some decent traffic. The other way is by using Twitter and Facebook; you can of Like it and tweet out particular products to your friends. That has been very valuable.

“When it comes to purchasing used appliances and used couches, there is a bit of a collegiate demographic — people that are college students — and so as a sort of worst case scenario, he was going to look to somebody in college and universities and see if he’d be able to sort of sell to that as well. But actually the traffic hasn’t been a concern for him at all. He put links here and there and that’s been able to drive some really good visitors to his site.”

PEC: The innovation concept with Empty My Apartment! is that he’s able to deploy the store quickly and cheaply and sell products in a manner that he wouldn’t otherwise be able to sell them. Then he can pull it down. So, it’s a very finite use for a store, right?

Finkelstein: “In this case, Brian does have a little bit of understanding with ecommerce. He’s not necessarily a programmer; he didn’t need any programming to do this. But this is really what we mean when we say ‘democratizing ecommerce’; you can throw up a store in an hour, sell thousands of dollars of products including the $25,000 Audi A6 that he’s selling on there. Then when the products are done, you can sort of roll up your store and move on. This is just the unique way to do that and he’s done a great job with that.”

PEC: The third site you’re going to tell us about is Threadless.com, the t-shirt site.

Finkelstein: “When Threadless initially came out, it got a lot of attention. The thing that I initially noticed about Threadless was that it had the coolest t-shirt designs out there. It’s a t-shirt website where anyone can submit a design, and the community at large is able to vote on that particular design. Depending on how many votes a design gets, once it reaches a threshold, Threadless then goes ahead and actually prints those t-shirts for commercial sale on the site. That in itself is unique. 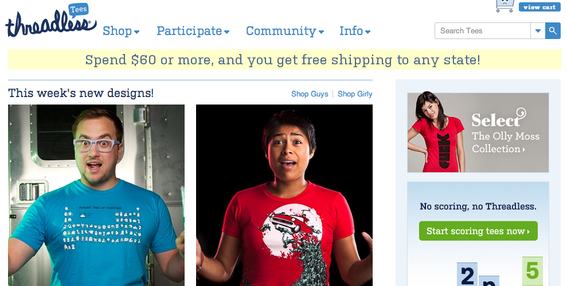 Threadless.com relies on consumers to submit t-shirt designs, and then vote on them.

“What I think is really unique about Threadless — this is something that was never available in the traditional retail model and is only possible by ecommerce — is that effectively there is no separation between producer and consumer. The lines are completely blurred. The reason for it is that strong community aspect. If I submitted a design and people really liked it, and it got voted up and Threadless produced it, I would actually receive a commission of those sales. But more importantly, by virtue of my interaction with Threadless, I also become a loyal consumer and a loyal community member.”

PEC: So, for those that aren’t familiar, walk us through the mechanics of Threadless. Say I have a t-shirt design that I want to submit.

Finkelstein: “You’ll notice when you go to Threadless.com, there is a link that says ‘participate’ and if you go to participate, you have two options. The first option is ‘submit designs’ and the second option is ‘score designs.’ If you select ‘submit designs,’ you can literally upload any design that you’ve created. Once I’ve done that, Threadless will digest it and make sure that it’s compliant, then they’ll then send it out to the community. By clicking on the ‘score designs’ link, I can vote for designs that I think are the coolest or the most compelling or the ones that I myself would want to buy. Then based on the ratings, Threadless will go ahead and actually produce those shirts, and the community at large can purchase them.”

PEC: The participants that rate the shirts, score the shirts, they don’t have to obligate themselves to buy them, right? They can just score them.

Finkelstein: “Exactly. That’s why the community is so strong because frankly, you’re not necessarily committing to purchasing the shirt by voting for it. All you’re saying is given your personal interest or your personal taste, you like this t-shirt. Again, the more votes the shirt gets from the community, the higher the likelihood is to have those produced.”

Finkelstein: “Overall, the Internet is in its infancy. I think ecommerce is still a newborn baby and I think we’re now finally starting to scratch the surface in terms of what can be done with the nontraditional ecommerce retail model. None of these opportunities were possible in the traditional brick-and-mortar business model. It’s great that we can do this really cool stuff via ecommerce.”