How to Reduce Email Unsubscribes; 3 Tips

When one considers that 93 percent of American online shoppers receive at least one permission-based email each day, it is little wonder that email marketing is a mainstay of Internet promotion and an excellent source of traffic and sales for ecommerce businesses.

Sometimes, however, those shoppers unsubscribe. In fact, according to a recent Exact Target report — which is also the source of the 93 percent figure mentioned above — 91 percent of American email users have subscribed to a commercial email newsletter only to decide later that they did not want it. That means that over time, a lot of customers and prospects could see a merchant’s unsubscribe page.

Saying goodbye to an email subscriber can be an opportunity, if a marketer can master the email unsubscribe process.

The Exact Target report found that some 42 percent of shoppers surveyed said that they were more likely to buy from a company with which they had an email relationship. Interestingly, however, when those shoppers unsubscribed from a company’s emails, they do not necessarily have any ill will toward that company.

This behavior may indicate that it is all right to engage or even reengage shoppers throughout the opt-out process. To be sure, this is not license to try to sell a would-be unsubscriber. But it is a chance to offer more email options or other forms of engagement.

Some 54 percent of email subscriber will opt-out when they feel like they are getting too many emails too often from a particular brand or company, according to Exact Target. Essentially, they have email frequency overload.

With this in mind, one step toward mastering the email unsubscribe process is to offer a variety of frequency options. When someone clicks the unsubscribe link at the bottom of an email, aim that link at an unsubscribe landing page — sometimes called an unsubscribe center — that offers frequency alternatives. For example, perhaps a subscriber that was ready to opt-out of weekly emails would be willing to get one email per month, or one per quarter. 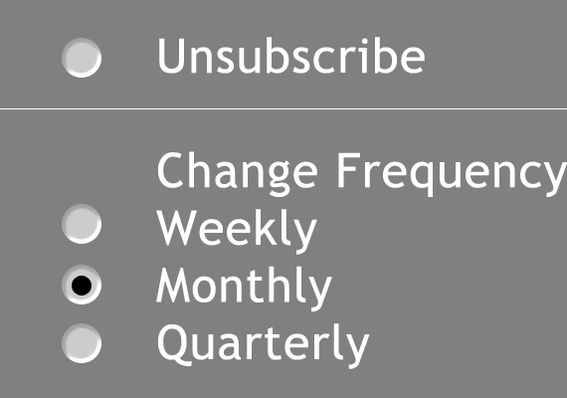 Content, or more specifically content relevance, is extremely important in email marketing. For example, 49 percent of email users surveyed said that they unsubscribed because the email content was repetitive, boring, or irrelevant.

Of course, relevance differs from one potential customer to the next. So an email marketer might be wise to offer several email choices — some broad in content scope and some more narrowly aimed at specific identifiable niches.

When a subscriber arrives at the unsubscribe center, include the option to switch to alternative lists. For example, a retailer might have a general list plus lists for each product category. 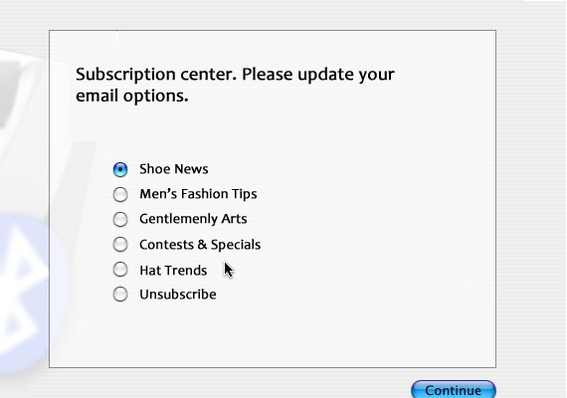 Offering potentially more relevant emails could save a subscriber.

Offer an Alternative Media or a Sabbatical

According to Exact Target, 47 percent of email subscribers opt-out because they feel like they get too much email in general. A full inbox can add emotional stress as recipients feel the pressure keep up, so it is little wonder that they are seeking a respite.

Consider giving folks the option to subscribe to newsletter content or other marketing materials via a different media. For example, add a link to get an RSS feed instead of the emails, or offer the option to receive a monthly text message with a link to the content.

It may also be a good idea to offer a sabbatical or rest. Just give the subscriber the option to take a one-month break rather than unsubscribe completely.

Offer subscribers the option to take a break can alleviate inbox overflow without ending the relationship.

Ultimately, mastering the unsubscribe process is about giving contacts more options, not getting in the way. Remember to always make it simple and easy to actually get off of the list.

When it does come to offering options, consider anything that enhances or refines the contact’s experience.