The battle continues among large Internet retailers and the states over charging sales tax for purchases over the Internet. This is especially the case where the retailer has no “nexus” or presence in the state in which the consumer is located. As I discussed in “Internet Sales Tax: Year-End Status,” a prior Practical eCommerce article, states are trying to be creative by redefining “nexus,” or attaching additional reporting requirements to retailers that sell to their residents from out-of-state.

Colorado is one state that has tried to put additional burdens on retailers by requiring out-of-state retailers to report information about Colorado residents that purchase from them. On January 13, 2011, Direct Marketing Association (DMA) won a preliminary injunction against Colorado, requiring the state to suspend all enforcement of its notice and reporting requirements that were imposed on many out-of-state retailers. DMA wrote about this on its advocacy blog, at “DMA Stops Colorado from Enforcing Tax Reporting Law, Marketers Need Not Comply.” 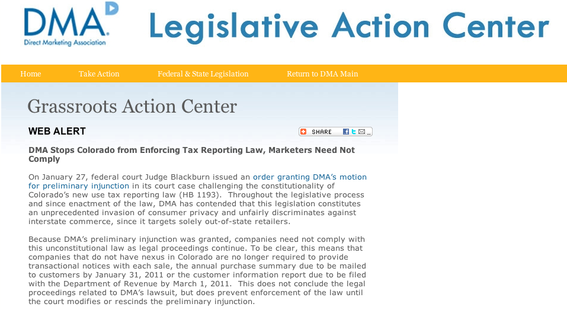 This injunction was issued based on the U.S. District Court’s determination that the DMA would likely prevail on its claim that the information reporting requirements on out-of-state retailers violates the Commerce Clause of the United States Constitution. This clause — Article 1, Section 8 of the Constitution — prohibits actions by states that interfere with interstate commerce and denies the states the power unjustifiably to discriminate against or burden the interstate flow of articles of commerce.

Amazon has been taking its own actions against state laws both in the courts and outside of the legal system. Shortly after the passage of the Colorado law, Amazon terminated all of its contracts with its affiliates (i.e., third parties that it pays for referrals) in Colorado because the state law expands the nexus rule to include in-state affiliates. Amazon has taken this position for all states that enact a law that would require Amazon to collect sales tax based on its contracts with affiliates in a state.

Amazon has apparently gone to extremes in Texas. Texas assessed Amazon with $269 million in uncollected sales taxes from online sales, pursuant to that state’s sales tax laws. Amazon then announced that it is closing a distribution center and canceling its operation expansion in Texas. In this environment of the need for “job creation,” these actions by Amazon — out of the court system — have started to put political pressure on the states enacting Internet sales tax laws.

Now, Amazon’s competitors may be trying to take advantage of Amazon’s battle with the states. The Wall Street Journal published “Amazon Partners Wooed By B&N,” stating that Barnes & Noble has announced its plans to recruit any Amazon affiliates that had been terminated by Amazon because of its tax dispute. Other competitors of Amazon with similar programs may have plans to do the same.

As of the date of this article, the New York case with Amazon and Overstock.com has not yet been resolved. (See “Internet Sales Tax: Year-End Status” for more details.) A lower court ruled in favor of New York, but a New York Appellate Court revived it in November 2010. Although the Appellate court ruled that the statute was not unconstitutional on its face, the revival of the case keeps hope alive for online retailers — based on the claim that the statute is unconstitutional as it is applied to the Internet and their businesses.

There are approximately 16 states that have enacted laws similar to the New York’s. Many other revenue-thirsty states are waiting to see the outcome of this case and will likely be crafting their own versions. Depending on the determination of the court, Amazon and other companies will most likely adjust their business operations to avoid the “affiliate” nexus definition. As discussed above, Amazon has already started to do so in many states.