It’s the end of 2010 and the status of sales tax on the Internet remains somewhat the same since the U.S. Supreme Court ruled in 1992. States continue to push to try to gain access to growing sales transactions that occur on the Internet, and large ecommerce retailers continue to push back. In 1992, the U.S. Supreme Court ruled — in the Quill case — that a retailer is only liable for sales tax if they have a physical presence in a particular state. This is called “nexus.” This rule was based on the Supreme Court’s perception that compliance by the retailer would be too burdensome on interstate commerce because of differing tax codes among the states.

In July of this year, legislation was proposed in Congress that would allow states to require the collection of sales and use taxes if they entered into a multi-state compact called Streamlined Sales and Use Tax Agreement. This compact is meant to lessen the burden on interstate commerce by simplifying tax codes among the states, which the states hope will be the key to getting the legislation past. The proposed legislation is called the “Main Street Fairness Act.” Currently there has not been any action on this legislation by Congress.

Legislation in Congress on this issue has been difficult to get passed. Therefore, states have tried other avenues to try to collect tax on Internet sales. States have tried to change the definition of “nexus” in order to try to capture sales tax from purely Internet based companies. In 2008, New York extended its definition of nexus to reach certain ecommerce retailers. Its focus was on major retailers, such as Amazon and eBay. The New York legislation states that online retailers must collect sales tax if they have sales affiliates in the state that generate a combined total of $10,000 or more per year in revenue to the retailer. Sales affiliates are defined to include individuals or organizations that are paid to link to the online retailer.

Amazon and Overstock.com sued the State of New York arguing that the law is unconstitutional because it violates the Constitution’s “Commerce Clause” (which permits the federal government — not states — to regulate commerce “between the states”) and due process. The lower court dismissed the case and just recently a New York State Appellate Court ruled on that case. The Appellate Court stated that the law does not violate the Commerce Clause or due process. However, other claims that were dismissed by the lower court were revived and the case was allowed to continue. The case has been sent back to the lower court for further review based on additional evidence not originally presented.

Many states are following New York and enacting their own version of the New York statute or other laws to try to cash in on Internet sales. Although many states already require the consumer who purchases from the Internet to pay “use” taxes for the use of the personal property in their state, reporting of such purchases by consumers is very low. Also, the cost of enforcement to collect the use tax by a state is simply too high for many states to try to capture this income on a mass scale. Therefore, states continue to look for avenues to try to collect taxes from the retailer.

Colorado is taking a different approach. Legislators in that state are trying to require retailers to provide information to customers about paying Colorado use tax. This law requires Internet retailers that do not collect sales tax to notify Colorado customers that they owe tax on their purchase. This requirement is only for retailers that have more than $100,000 in annual sales. Other states have put in place provisions that require their governing entities (state and local governments) to only purchase from retailers that collect sales taxes. 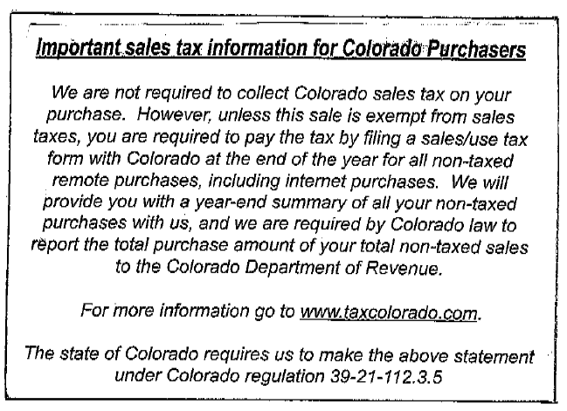 Scan of postcard, enclosed in a shipment from an ecommerce merchant, to a Colorado resident.

As state budgets feel the pinch of less revenue coming in, we will continue to see the states and the federal government try to figure out a way to tax out of state sellers on sales. States that have not already enacted laws like New York’s are following the Amazon and Overstock.com case to see how they might be able to take advantage of similar statutes. At some point a national act, such as the Main Street Fairness Act, may be less burdensome on retailers than trying to comply with each state’s’ individual laws. Going into 2011, ecommerce retailers will need to continue to watch what each state is doing so they can maintain compliance with creative laws that may get passed in each state.