“True love is like a pair if socks: You gotta have two and they’ve gotta match.” -Unknown

Brendan Gallagher and Kerren Lynch-Gallagher aren’t your typical website owners, if there is such a thing. Brendan directs animation at Out To Play Entertainment. And Kerren, who goes by Kerry, is a certified personal fitness trainer and certified massage therapist at her own Clarity Health Works. Typical or not, the two share a deep affinity, an affinity for socks, quality socks. Whether it’s Canari, Dahlgren, Injinji or Darn Tough Vermont, all can be found at Killersocks.com. The site, which is still in its infancy (it launched in June 2007), caters to those who care about their feet, those who recognize a quality sock from something that simply goes between a foot and a shoe. 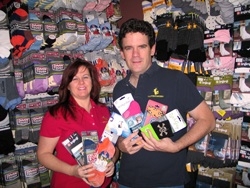 PeC: Killersocks.com is certainly hard to forget. How did you come up with the name?
GALLAGHER: It’s kind of interesting actually. My wife, who’s also my business partner, had originally thought of things like Athleticsocks.com and all sorts of stuff, and they just sounded like basic dot.com names. But because of my background, I’ve been doing commercials and advertising for years and years, that’s kind of what I do, animation and effects for advertising design and such, and I felt it needed something more. Socks are kind of that thing that people throw in. Socks are usually in the accessory section of peoples’ stores, in that back corner of the brick-and-mortar business. They’re in some lost column if you got to one of the big online retailers like REI or such. So you kind of had to strap a personality on them that people would dig, especially if you’re an outdoor-type of person. If you are a hiker or runner or something like that, your feet are really important, and if they get chewed up during an event, you’re out of the game. So the idea with Killersocks.com is you definitely want killer socks on your feet if you’re going to be outside playing hard.

PeC: What kind of socks, exactly, does Killersocks.com sell?
GALLAGHER: We carry high-end socks. What we’ve found are people who are very active, but if they’re running in cotton socks or crappy socks, then their feet are going to get blisters or have problems — they’re going to tear up their skin and think, “I’m not going to do this anymore.” We’ve picked our brands and manufacturers carefully. In all, in the accounts we have, we have 14 sock manufacturers. And all our accounts with them are direct. We didn’t take on any one where we had to go through a distributor or anything like that. We basically called the manufacturers and said, “listen, we’re creating this niche, a very high-end, specialty store that is going to carry the best of the best.” We also have a section called Killer Care and in there you’ll find some of the comfy items and some of the stretchy items and supplemental stretching devices.

PeC: Why socks? What is it that appeals to the two of you about socks?
GALLAGHER: It was what appealed to Kerry initially. What she thought originally was, we looked at the idea and there something we could be doing with both of our expertise that we could kind of develop and grow where time didn’t necessarily equal income. The reason socks came up was through a conversation she had with one of her clients, which led to her doing a little research. She had some clients, middle-age people, and the woman’s husband had a condition called lymphedema, where he had swelling in his feet and swelling in his toes, and it’s a very uncomfortable situation. So she started investigating these toe socks, which would keep the toes separate and reduce the swelling in the feet.

So when she started realizing the technological strides over the last few years, that was kind of cool. And with the athletes she was working with, she also started learning about what footwear these long distance people were wearing. She’s had a couple of clients compete in the Ironman triathalon, and she started learning about socks, and what these guys were wearing. The socks are called the Injinji socks, which are just these incredible toe socks.

Eventually, she said, if you look at where they’re available, you kind of have to dig to find them. You go to the REI site or the Backcountry site, they have them but they don’t carry all of them; they carry a few, and randomly — you get what they carry, sometimes small, sometimes medium, but then they don’t have them in large or extra large. And my wife realized with the wave of people getting much more health conscious and said, “you know if you have a boutique store and people could get to it, one that was cool, very specific, and it didn’t feel like Bob’s House of Socks, like getting 14 pairs of socks for $5, it could work.” We realized we were never going to hit the Wal-Mart, bargain hunter market, because spending $12 or $15 is simply not going to make sense to them. But for the target market that do that, the people who run on the weekends, professional people or people who are dedicated to outdoor activity, it makes perfect sense to them. And our store has a little bit of a sense of humor. I think I’m part cartoonist from years of doing animation, and quite honestly the best way sometimes to make people feel comfortable, whether it’s in a meeting or in a pitch meeting, is to introduce a little bit of humor. I think when people see you don’t take yourself too seriously, but you do take your product offering seriously, and your policies seriously, your return and shipping policies seriously, they say, “you know, I feel comfortable with this.”

PeC: How do you distinguish yourself from other online companies that sell socks?
GALLAGHER: Primarily, I think it is personality and service. For me, when you show up, you look and say, “Wow that’s kind or weird, that’s kind of cool.” It’s visually striking. You look at it and it’s all about what you came there for. You learn about stuff but have fun here too.

10 Predictions for the Peak Shopping Season