Candy Blakeslee once ordered a toy for her dog. She ordered the toy on eBay because she and her husband, Dean, had sold antiques there and she figured it would be a good place to buy dog toys, too. The year was 2000. 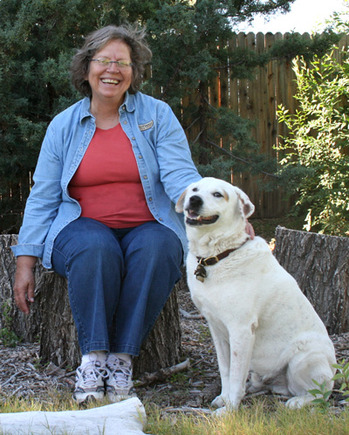 “I decided I should buy my dog a toy from eBay.” said Blakeslee. “So I shopped around and I ordered some dog toys and it was the worse eBay experience I ever had. Not only did it take 3-1/2 weeks before they shipped, I called two or three times and the people were rude and the whole time I was thinking ‘Oh, my gosh. Dog toys should be fun.'”

By then, Blakeslee had grown tired of sourcing antiques in the Arizona heat, and she realized that the seller of her dog toys, on eBay, was simply purchasing them from a wholesaler.

“I looked up online where they are getting them and I said, “Oh, my gosh, they’re not only selling dog toys, they’re making money and they don’t have to go out in a 112, 120-degree weather and go to auctions, and estate sales, and garage sales to get their supplies. They can do it at home.”

For the business of selling antiques, Blakeslee had purchased in 2000 the domain BestFriendsGeneralStore.com. And then she became interested in selling dog toys. She realized that dogs are frequently a human’s best friend and, in February 2002, relaunched Best Friends General store as a retailer of dog toys.

Fast forward to 2010 and the business records $350,000 of annual gross revenue. Candy and Dean run the business from their home in the central Arizona town of Chino Valley. They stock around 1,300 inventory units, and they ship around 8,600 orders per year.

“In order to have a successful ecommerce site, you have to have passion,” said Blakeslee.

She shared that passion with us recently, as well as lessons from shopping cart changes, search-engine-optimization miscues, the importance of branding, and more.

“I started on eBay and I realized early that I needed an independent website. So I wanted to integrate the inventory between eBay and a shopping cart. So I looked around and chose a very well known brand of shopping cart. They were fine if you were, say, shipping calculators and people were only buying one calculator. But with dog toys, consumers buy multiple items–blue balls, red balls and an elephant’s toy, for example–and the shopping cart almost took me out of business because it would not track my inventory. So I was only selling what I didn’t have and I wasn’t selling anything I had. It was a very bad experience.

“From there, I went on to Kyozou, which I believe is still around, and actually it was a very good shopping cart. They’re out in Canada. They work pretty well. They gave me an independent website, but they were taking the percentage of the sale, which was what I’m was trying to get away from. So I found them very expensive.

“So before I went through another conversion, I went to a Miva Conference, where I not only learned more about the software but I also met a designer/developer. I decided to go with Miva at that point. That was in late 2004, I believe. We’ve been with Miva Merchant since then.”

“We accept PayPal. We always have. And we now use Miva Merchant’s processor for credit card payments. We did have our credit card processing with our bank, Wells Fargo, and Miva came to us. I decided to give them a try. We get our money deposited in our account within 24 hours of the sale. With Wells, that would be three to five days. Miva’s rates are less; so I do think it is important that people shop those rates. I didn’t used to. It used to be it doesn’t matter who you use, it was all the same. That isn’t true.”

“We use StoneEdge Order Manager. It integrates with Miva Merchant and that is also how we integrate the inventory between eBay and Miva Merchant.”

“We use Hostasaurus. I did try some other Miva hosting companies early on, but Hostasaurus was recommended to me and I’ll tell you what, I cannot say enough good things about them. They save us money because I don’t need Miva Merchant support; they take care of support. If my site is down, they bring it right back up and they know Miva Merchant inside and out.”

“I used several people and that’s been one of my biggest mistakes. But, most recently, I’ve used Miva Merchant SEO services and I found them to be very good because they know the software. You want an SEO person who knows your software, your shopping cart. They have to. Otherwise, they don’t know how it’s going to work. I’m now pleased with our search engine visibility.”

“We manage our own search engine marketing We do Google AdWords and we are just now using Bing, too. We loaded our products into Bing’s new shopping site, Bing Shopping. They’re offering the same thing as Google Shopping.

“I did a side-by-side comparison with Google and Yahoo!. I ran the same ad at the same cost, exactly the same, and Google was half the price of Yahoo!. Half the click price. And they returned twice as much.

“But we rarely pay more than 20 cents a click and we run thousands of ads. I would suggest doing very specific ads for specific toys, instead of doing broad ads.

“The reason you want your click through rate high is you pay less. The more your ad is clicked, the less you have to pay to have it ranked higher. Because Google is going to say, ‘You know, she’s going to give me 20 cents [per click] and this other guy is going to give me 35 cents but his only gets clicked few times. She’s a better risk.’

“My daily budget is, incredibly, $744,000, but I rarely spend very much in practice. I found the higher the budget you set, the more likely you are to have a top placement if you have a high click through rate. If you do that, then they [Google] also says, ‘Not only does she have a high click through rate, she’s willing to spend thousands of dollars with us. We’ll let her be at the top.’ And we’ve actually set that at three quarters of a million dollars a day, but we’ve only spent a thousand dollars this month. And that would be a high month for us.”

“We fulfill and ship all orders ourselves. We ship via UPS and USPS. Our customers get to choose the carrier and we offer expedited shipping as well as priority and first class. We do not offer parcel post. We find it not reliable.

“We offer free shipping for orders over $95. But the biggest challenge in shipping is trying to calculate the shipping cost, especially for multiple-item orders, trying to make that fair so that we break even on shipping. We don’t try to make money on shipping, but customers do not understand how much it cost to ship a product.

“But I haven’t seen that high shipping rates cause customers to abandon.”

“For August 2010, our conversion rate is 1.89 percent so far. It’s usually about 2.0 percent. That’s the percentage of total visitors to our site who actually buy something.” 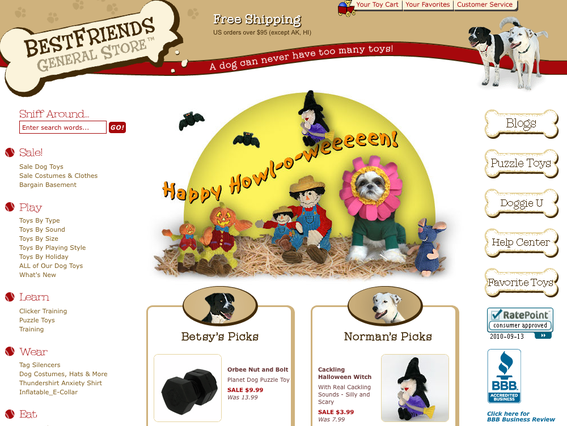 “To help find products to sell, I go to all the major tradeshows in the pet industry here, and, in addition to that, I subscribe to all the trade magazines. Then I use customers’ suggestions. Several times a year in my email, in my newsletter, I’ll say I’m going to the tradeshow, what should I look for? And we’re also known as the place to call for a hard-to-find dog toy.”

“We use non-integrated QuickBooks. I have an accounting background, and actually my ex-boss is a CPA, and does our books. But we do them unconventionally. We don’t integrate. Actually I export our data from Miva Merchant and import that into Microsoft Money. I send that to my accountant.”

“”We do Facebook, where we have three accounts. I have an account; Betsy and Norman, our dogs (who think they own the store), have accounts. The business has a Facebook Fan page. I have an account on Twitter, ‘BestFriendsMom.’ We also do Dogster. I’ve been on many dog social sites and I really like Dogster best. The advantage of Dogster is I have a group of dog owners on there that we go back and forth with several times a day. When I have a new post somewhere and I want to drive traffic to it, all I have to do is ask them to spread the word. So it’s kind of like I get to be the pack leader.

“They usually follow my lead and so that’s really great because that get things moving and it gets ratings, too. The other thing is we have two different blog sites. I blog, my husband blogs and Betsy blogs on BestFriendsGeneralStore’s Dog Blog. Norman has an offsite blog, Noisydogtoys.com.

“And we also blogged about a dog-related controversy that drove traffic. A big supplier of ours was bought out by a shock collar company. We refused to carry their products and we blogged about that. We also do press releases and we use that as another way to drive traffic.

“The blogs raise my page ranking, but not because I’ve always blogged about the dog items. We sometimes blog about non-canine controversies, such as a local re-zoning issue. That created new traffic to my blog; we call it ‘marketing by controversy.'”

“Our biggest mistake was doing things just for the SEO benefit. Early on, I had an SEO person who recommended a certain product line solely for the keywords. Well, I spent all this time finding the right products, and I wouldn’t just sell any dog product. But I took his recommendation and sold products for the SEO benefit, which was a mistake. When I came back and said, ‘No, this is what I am and this is what I wanted to be,’ it made everything easier.”

“Our biggest success, I would say, is our branding. I don’t think most sites start with branding, but the fact that I did and I have focused on dog toys that should be fun, and I stuck with that. I was before my time and I didn’t even know it. In fact we were recently written up in “Branding Basics for Small Businesses,” a book by Maria Ross. We were written up in there for our branding and it was just something that came naturally to me.