Citizens of Hungary were banned from owning and operating their own businesses from World War II until the communist regime fell in the early 1990s.

With no exposure to entrepreneurialism for about 50 years, one Hungarian family, the Panczels, bravely opened a convenience store in Szolnok, a regional town about 75 miles southeast of Budapest, in 1993.

Their young son Krisztian obtained invaluable experience by working for his parents in their store after school, on weekends, and holidays.

Krisztian met his wife Maria at Szent Istvan University, in Budapest, in his agricultural science classes. When they graduated in 2001, the recession had hampered their chances of work so they backpacked to Queensland in Australia, arriving with $200 and speaking no English. 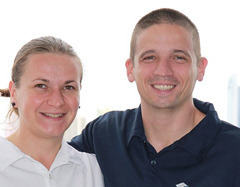 Despite their degrees, they worked as farm hands for four years, learning English, and later worked for the Queensland Departments of Transport, and Natural Resources and Water, as administrative and project officers.

The rise of Internet-based retail caught Panczel’s attention, telling Maria they should open an online store of some kind. He soon found a potential product to sell.

“The garden shed for our first home ended up being so bad we had to throw it away and then I thought we could build a business based on good, quality backyard storage,” Panczel said.

“After a few days of research we started to contact shed manufacturers to see if we could sell their products online.”

Revenue grew rapidly to $1.3 million in 2009 when they built CheapSheds.com.au. Revenue more than tripled to $4 million by 2012.

Panczel estimates he lost hundreds of thousands of dollars in sales via three inadequate platforms for Cheap Sheds until January 2013.

He spent approximately $5,000 on the company’s first website, developed by a colleague’s relative who had no idea what the platform should do.

Panczel hired a freelance programmer to complete the cart, but it was still sub-standard in what it could do.

After Cheap Sheds outgrew this first cart, it used a problematic Australian hosted cart for nearly four years that Panczel does not wish to name.

“Unbelievably, the CMS [content management system] displayed pages from the cart’s other online retailers — such as an air conditioning website — and many of our pages disappeared.”

Panczel estimates the shopping cart lost Cheap Sheds an estimated $350,000 to $400,000 in sales as he and his staff used live chat to connect with customers unable to complete transactions on the website.

After an initial trial with PrestaShop for Cheap Sheds New Zealand, he switched that site to the Magento community open-source platform, which he uses for Cheap Sheds Australia — the company runs separate sites for each country.

“We heavily customized Magento for our back-end system and use it for our CRM [customer relationship management]. We cannot imagine we’ll outgrow it, and I don’t see the need for an enterprise level platform for any time soon,” Panczel said.

“Customers have increasingly higher expectations for businesses to have a nice and practical site and we are constantly striving to improve design and usability,” Panczel said.

After successfully growing its sales on eBay, Cheap Sheds now has a PayPal relationship manager.

“PayPal has been a very reliable merchant processor over the years. We also have a merchant account with an Australian bank, but we prefer to use PayPal,” Panczel said.

Cheap Sheds created a custom-built order management system in Magento to deal with seven different suppliers’ products, most of which are heavily customized and nearly all of them shipped in a different way.

“We took years trying to find an order and customer management solution; we had to build our own,” Panczel said.

“Hosting is a significant cost, and you must choose one that you can rely on,” Panczel said.

Starting with only the Panczels, by 2012 Cheap Sheds had a customer service team, an operations manager, and a graphic designer.

By 2013, Cheap Sheds had grown to 20 employees, including 13 fulltime staff, adding a marketing manager, web developers, videographers, and a team of graphic designers, most of whom work remotely from their homes.

Panczel uses the Basecamp project management platform for everyday collaboration and Skype to communicate with individuals and for team discussions, as well as Google Hangout or GoToMeeting for teleconferences.

Website traffic rocketed after Cheap Sheds began providing how-to video content, ranging from how to choose a garden shed, to assembling the products.

“No one is passionate about a storage shed. So we had to find ways to make the niche more exciting and more engaging,” Panczel said.

The team launched the Shed Contest and the Cheap Sheds video game that helped grow traffic.

“We’ve been better off thinking outside the box than trying to manipulate the search engines with links.”

Customers can either opt for free delivery to the manufacturers’ depot where they can collect their product, or delivery to their home for a small fee.

“Shipping is very important on our agenda. Shipping in Australia lags behind the U.S. and Europe and the [low] level of customer service from transport is shocking,” said Panczel.

Panczel began working with his first Australian supplier on a drop shipping arrangement, handpicking the products. Cheap Sheds now has similar contracts with manufacturers in the U.S. and Israel, which eliminates the need to carry, or manage, inventory.

Panczel uses Xero for accounting, which is integrated into the Magento back-end.

“PayPal has been programmed into our Xero account, so customers who call up and request an invoice can pay from the invoice itself,” Panczel said.

Like most online retailers, Cheap Sheds features on all the major social media platforms.

Panczel has taken it a step further, linking his eBay and Cheap Sheds websites to social media sites to answer product queries from customers.

“Over time, our brand has developed a Cheap Sheds community,” Panczel said.

Panczel controls expenses by not having warehouses and fancy offices. He invests instead in content creation — especially video — and spends heavily on marketing and technology.

He adjusts marketing expenditure depending on revenue, but as yet, has not reduced his spend.

“That’s not something you could do if you had high overheads; there’d be no flexibility to cut back from one month to another,” said Panczel.

“As an online business, customer service is all we have in a market that is not famous for it,” said Panczel.

Panczel prides himself on how he makes Cheap Sheds ever more user-friendly with articles and videos showcasing products.

The company has created a video game, the Shed-A-Gram (which lets it share sheds via Instagram), Cheap Sheds TV, and a wind-rating calculator to help customers identify the right type of shed to buy for their region, terrain, topography, and density.

Panczel admits he has no shortage of big mistakes.

“When we launched our first website, it was an embarrassing-looking homemade site and worst of all, we had sheds displaying for $19; we were frantically trying to figure out how to change the prices as quickly as possible,” Panczel said.

“We had customers calling up and wanting the products for $19 and we had a hard time explaining what was going on, as we had no idea ourselves.”

“We have grown into the largest online retailer of backyard storage products in Australia, but our biggest achievement is being showcased by an Australian government website for our unique business and customer service model,” Panczel said.

“We celebrate our success and wins, however we play in a very competitive market and never take being a market leader for granted.”