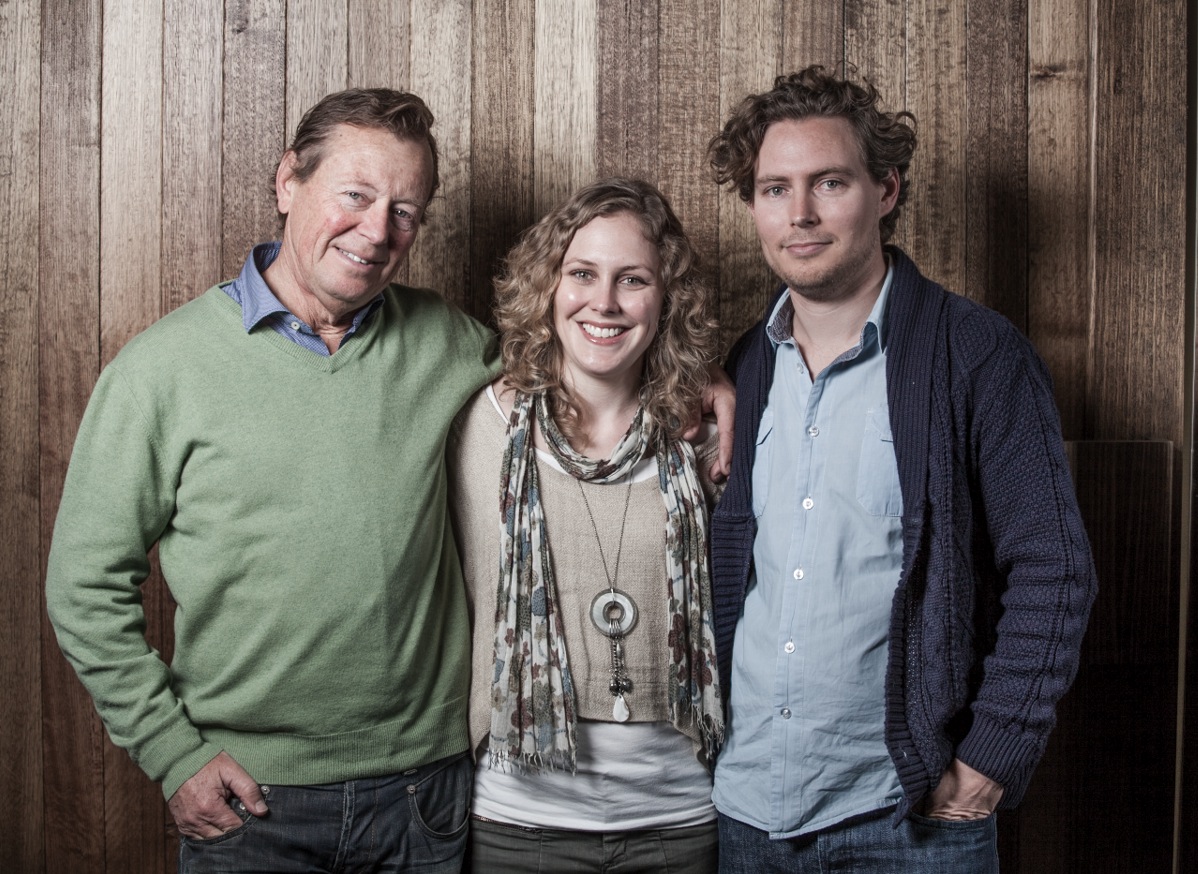 After studying philosophy, visual arts, and marketing at Monash University in Melbourne, graduating in 1999 with a Bachelor’s in Visual Arts, Daylan travelled through Asia and Europe. He began working for the BBC in London, in the training and development department, to introduce SAP (a software platform) to the organization, in 2000.

Daylan had taken the role, hoping to eventually produce creative content in the BBC’s production department. But he soon realized that was not possible. He returned to Melbourne in 2002.

During the 1960s, Robin and Daylan’s grandfather Bob James manufactured women’s clothing through their factory, which supplied Australian department stores, including Myer and Georges.

When both arcades were closed for renovations during the mid-1980s, Daylan’s father took the opportunity to relocate his two stores to the leafy, northern suburbs of Ivanhoe and Balwyn.

“Most people traveled into the city for interesting fashion. When Dad opened in Ivanhoe, there was only one other women’s clothing retailer. There are now more than 25 stores in the strip,” Daylan said.

Enni’s personalized customer service and the annual fashion parades held at the local town hall, attracted a loyal customer base.

Robin ran both stores until he handed them over to his son in 2009.

“I opened a new store in nearby Mont Albert in 2009 and began renovating all three, and modernized the point-of-sale system,” Daylan said.

Daylan believed Enni had a large enough customer base to merit its own website and launched www.enni.net.au in October 2011. 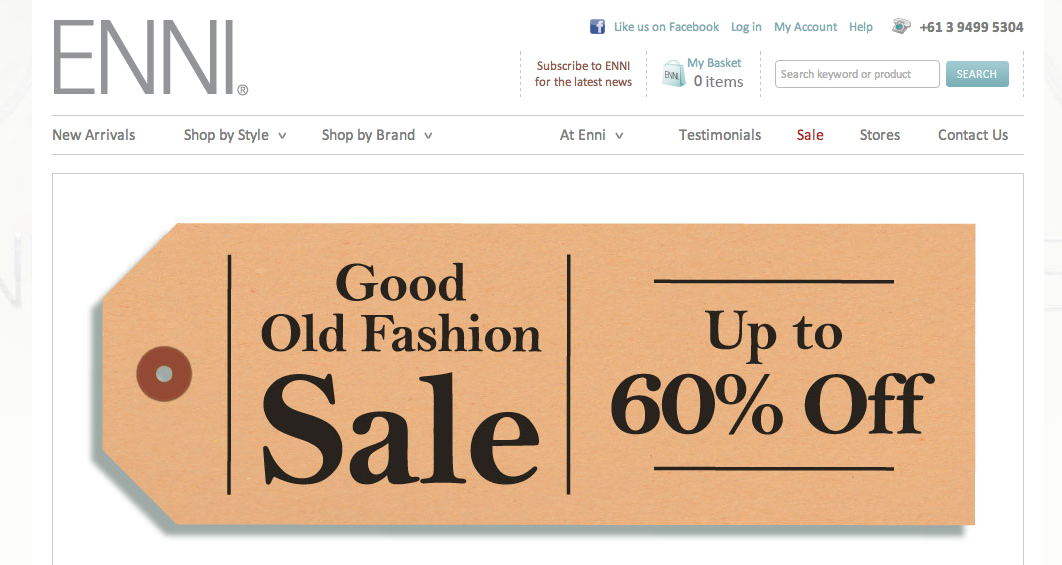 Daylan received shopping cart platform quotes ranging from $2,000 to $30,000, which frustrated him.

He sought advice from an independent Internet solutions provider called The E Team that had presented a free seminar about online retailing at the Australian Retailers Association.

“They advocated using an open-source platform so we wouldn’t be locked into one particular company, and we’d get greater flexibility and cheaper upgrades,” Daylan said.

However, Daylan ignored their advice. He discovered that Powerfront, a hosted platform that specialized in retail fashion and included such clients as Witchery, Sportscraft, Nike, and Pilgrim, could do everything.

“Most were positive, but one said we were crazy to go with them. I listened, but I felt he had a personality clash with someone at Powerfront, rather than a problem with the platform,” Daylan said.

Daylan plans to introduce filters by size, color, and price, and a function that will allow Enni to run “buy two, get one free” promotions, percentage discounts on certain brands, and up-selling.

“We accept Visa, MasterCard, Amex and Diners Club in our stores and wanted to offer these online too. We passed the technical details onto Powerfront and it all launched very smoothly,” Daylan said.

Daylan uses SecurePay for Enni’s credit card payment gateway. When he introduced PayPal in 2013, he saw a significant increase in sales.

“PayPal’s merchant fees are higher, but customers feel safer, so PayPal has become a ‘must have,’” Daylan said.

Daylan decided to use the physical stores’ stock as the “warehouses” for Enni’s online range.

“When we launched, we manually adjusted our online stock levels daily. A month later, we paid Powerfront $2,000 to program a simple FTP file to automatically update our website stock levels every hour,” Daylan said.

Daylan said the system is not perfect — “we can still over-sell an item” — but he says he will improve this process as online sales grow.

“We get many phone enquiries and how these customers are treated greatly affects our sales and repeat business,” Daylan said.

Daylan has been approached by search engine optimization companies every week since he launched Enni in 2011.

“The first crowd created a lot of dodgy back-links, but we quickly parted ways. We weren’t penalized by Google, but it was a wake-up call,” Daylan said.

He has just started working with Optimising, a Melbourne-based SEO company — “they are very transparent and our rankings are steadily improving” — spending about $700 per month.

Stephanie hand-picks stock from Enni’s three physical stores for the online orders each day, taking the clothing to the Ivanhoe head office to wrap and pack them.

“We use an online courier software called Temando to choose the most cost-effective courier for each parcel,” said Daylan.

“If one parcel goes missing you can lose a customer for life. We stopped using Fastway after a couple of months; if you read Fastway’s Facebook page, there are furious customers every day,” Daylan said.

Enni offers free shipping on all purchases; its average order is $216.

“Our preferred couriers are now Couriers Please and TNT Express. We use Australia Post for post office boxes and for orders that arrive after the couriers have left,” Daylan said.

“We have been sourcing good quality Australian and New Zealand fashion for women aged 30 to 60 for over 30 years from manufacturers, so product sourcing was easy for us. Plus we already had trading relationships with the suppliers we decided to sell online,” Daylan said.

While Enni’s physical stores uses the MYOB accounting software, Daylan has yet to integrate online sales into the MYOB system.

“We currently enter daily sales totals manually into MYOB. Integrating it would make it easier for our bookkeeper,” Daylan said.

“We have begun a series of Facebook ads targeting highly engaged consumers who like our brands, or our competitors’ — watch this space.” Daylan said.

Daylan tracks expenses each month by entering the average dollar sale, number of sales, hours worked, advertising, and returns in a spreadsheet.

“This helps me keep wages in check with our sales growth, at a level that allows us to be profitable as we grow,” Daylan said.

He also keeps a close eye on free shipping and returns (currently 8.5 percent of sales) to stay profitable.

Daylan is proud of Enni’s repeat business with 60 percent of customers purchasing three or more times a year.

He has given customers their purchases for free on a number of occasions when items have gone missing or have been delayed.

“This is expensive, but done in the right way is hugely appreciated and memorable. We are building a company for the long term, so our relationships with our customers as absolutely vital,” Daylan said.

Daylan underestimated the challenges of photographing clothing for his website when he discovered few of his suppliers could provide suitable imagery.

After interviewing several photographers, Daylan found Ben Capp, a photographer, who quoted $1,500 per day plus $300 for studio hire to shoot 100 garments, which was later renegotiated to 160.

The first two-day shoot, using two models to shoot 160 garments, cost $5,200, including deep-etching and cropping, which wiped out the profit per garment.

Today, Capp and Daylan have streamlined the process to shoot about 220 garments in six hours with one model for $600 per day.

“With one model at our photo shoots, there is less chat. We pre-group our tops, tunics, dresses, pants, and skirts by length so our photographer doesn’t need to adjust his set-up between garments. And including a pre-typed running list of garments with SEO-friendly terms lets Ben name his image files as they are shot,” Daylan said.

“We oversold an item, then redeemed ourselves by tracking down a replacement. The replacement took a week and a half to arrive . When we finally delivered the item, the customer wrote to say what wonderful service she had received and that she would definitely be back.” Daylan said.