Steven Perissinotto and his brother Mark grew up with a menagerie of pets on their parents’ 1,200-acre property in Gympie in rural Queensland, Australia.

Older brother Mark became a veterinarian, while Steven, who graduated with a law degree from the University of Queensland in 1992, practiced as a partner in McInnes Wilson Lawyers, in Brisbane.

“In the late 90s, we saw the Internet would become a game-changer in terms of how people interacted and how they did business,” Steven Perissinotto said.

The pair recognized that by selling affordable vet-grade products online, they could help customers care for their pets, save money, and save an extra trip to the veterinarian. 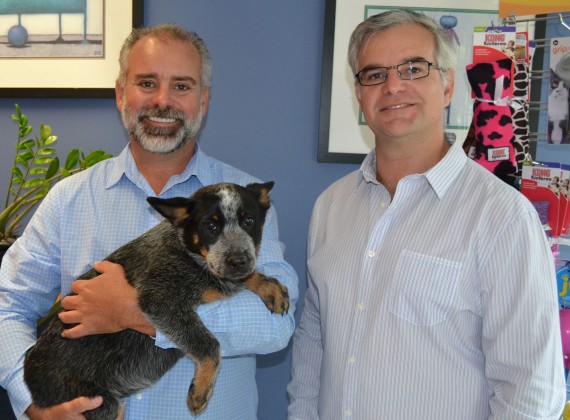 They founded VetShopOnline.com in 1999 and retained their full-time jobs for the first two years.

“Initially we fulfilled an online order or two each day from my brother Mark’s clinic, doing programming, marketing and customer service after hours,” Steven said.

In 2004, the company split its business into VetShopMax.com for U.S. and international customers and VetShopAustralia.com.au for Australian customers. 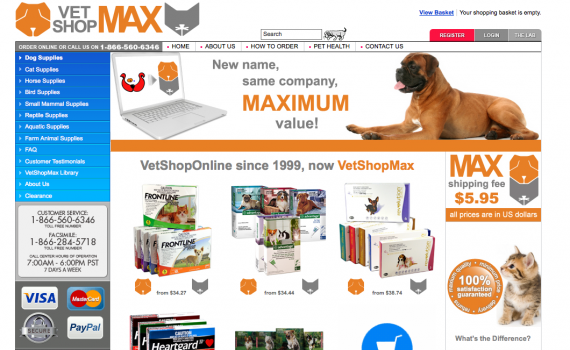 The pair first used a shopping cart solution created by a now defunct Australian firm, Sausage Software. They then, in 2003, move to a cart based on the osCommerce open source software, which was recommended by their web designer.

“Since 2008 we have been using a highly modified version of the AbleCommerce shopping cart with separate back ends for both sites to which our in-house developer has added a reminder system, gift vouchers and loyalty points,” Steven said.

He believes most shopping cart software could be further improved by including greater flexibility for sales promotions and site search solutions.

Until 2013, the Perissinottos had used “one-man band” website designers.

“While that was great in terms of cost control, it did have its challenges when we had a lot of work to be done or when changes needed to be made quickly,” Steven said.

They switched to Sydney-based CoSource after checking the company’s references with existing clients.

Both websites accept payment via all major credit card brands (via Worldpay), as well as from PayPal, direct deposit, Bpay, and physical check.

“It’s hard to believe there are people who shop on the Internet and still want to pay by check, but hey, the customer is always right,” Steven said.

The company’s in-house order management system was developed to ensure more than 97 per cent of orders can be shipped within 24 hours of receipt.

Vet Shop Australia holds all stock and manages all inventory and logistics, shipping up to 3,000 products per day. Orders are not picked in the sequence they come in, but by product type.

“For example, we pick all orders for Frontline Plus for dogs, then all orders for Revolution for cats. This increases picking speed and has reduced our picking error rate to less than 0.02 per cent,” Steven said.

Since 2007, Vet Shop Australia has been hosted by Bulletproof, an Australia-based hosting firm. Vet Shop Max, in the U.S., has used Server Intellect, a U.S.-based firm. Each host costs roughly $1,000 per month, according to Steven.

“Server Intellect’s uptime and response time is fabulous. Before we moved to these guys, we would log in in our Australian office to discover the U.S. site had been down and we’d lost a whole day’s sales,” Steven said.

The company uses U.S. monitoring service HostTracker to send alerts when the websites go down.

Until the first order-picking employees were hired in 2001, Steven Perissinotto, his wife, and brother Mark undertook customer service and shipping duties.

The company now has 12 employees working in accounting, marketing, customer service, and dispatch.

The Perissinottos strive to be the bosses they wished they had had when they worked for other companies full-time. They offer their team members, mostly part-time working mothers, flexibility for taking care of children and a pet-friendly workplace.

“Our staff brings their pets — including an Australian cattle dog, a German shepherd, a Staffordshire terrier, and two Cavalier King Charles spaniels — to work,” Steven said.

Both websites continue to rely heavily on Google AdWords, spending roughly $10,000 per month. However, despite this, the global financial crisis impacted sales, and growth has only just recovered to pre-2008 levels, according to Steven.

For search engine optimization, Steven suggests online retailers use their customers’ vernacular in their meta tags.

“For example, vets would never describe a flea control product as a ‘dog flea killer’ but our customers search for this on Google, so we try and use that sort of language,” Steven said.

The company manages all search-marketing efforts — AdWords and SEO — in-house.

All shipping is fulfilled by Vet Shop Australia’s custom-designed warehouse and head office in Forest Glen, near Nambour on the Sunshine Coast, in northeastern Australia.

Steven said the building was designed to ensure a smooth workflow of inward and outward logistics.

“We believe order fulfillment is the most important factor as far as the customer is concerned, and so we need to make sure it’s being done right every time,” Steven said.

Steven says that he occasionally offers free shipping promotions, either side-wide or in conjunction with specific products, which “works well.”

The company holds its own inventory, and sells all leading brands of pet health products, including Frontline Plus and Heartgard. But it took some time to convince those manufacturers and others of the value of online retail.

“Back in the early 2000s, many manufacturers thought online retailing somehow reduced the attractiveness of their brand,” Steven said.

Eventually, the Perissinottos convinced the manufacturers that selling their brands online was more efficient and cost-effective, and provided better healthcare for the animals as well.

“We think social media is far better for customer retention such as answering queries, and providing product updates, rather than as a marketing or advertising tool,” Steven said.

“I am yet to find anyone who can honestly say they get a return on their social media investment in terms of sales.”

Steven has negotiated small percentage discounts and extended payment terms of up to 60 days.

“So many businesses use late payment to manage their cash flow when money is tight, but on-time payment would allow them to negotiate better terms, which will have an ongoing benefit,” Steven said.

“After stock and staff, our biggest expenditure is advertising. Some advertising methods such as Google AdWords, work very well for us, but others, such as pet magazines, radio advertising, and social media, simply don’t give a return on investment,” he said.

He is proud of his staff members’ willingness to help customers.

“One of our customers who lives near our warehouse had forgotten to place her dog food order by 12 p.m. and the staff member who took the call delivered the order in her lunch hour,” Steven said.

Steven cites a relationship between his company and a Canadian company hired to provide web development, database management and hosting, call center and payment processing services, which soured when the company’s key contact resigned after three years.

“The Canadian owners didn’t do what they were paid to do and tried to steal our database, thinking that because we were in Australia there wasn’t much we would do about it. But we sued, we won and the court awarded damages,” Steven said.

And after wasting tens of thousands of dollars on marketing that didn’t work, Steven now critically assesses the return on investment of all marketing expenditures.

“For example if a magazine claims 35,000 readers, and charges $1,100 for an advertisement, we need to generate about $20,000 in sales to justify the expense. Wherever possible we try to negotiate advertising on a cost per acquisition model,” Steven said.

“The best thing about these awards is the recognition they give to our team,” Steven said.