In the novel Siddhartha, author Hermann Hesse describes the spiritual journey of a man who meets Gautama Buddha in ancient India.

He visited Chiang Mai, Thailand in 1995 to meditate in a Buddhist temple for two weeks during his freshman year at the University of Richmond (Virginia), where he was studying religion.

“After graduating, I spent three years backpacking around Southeast Asia, hungry for the experiences of foreign lands and people, after being enthralled by Siddhartha,” Tortora said. 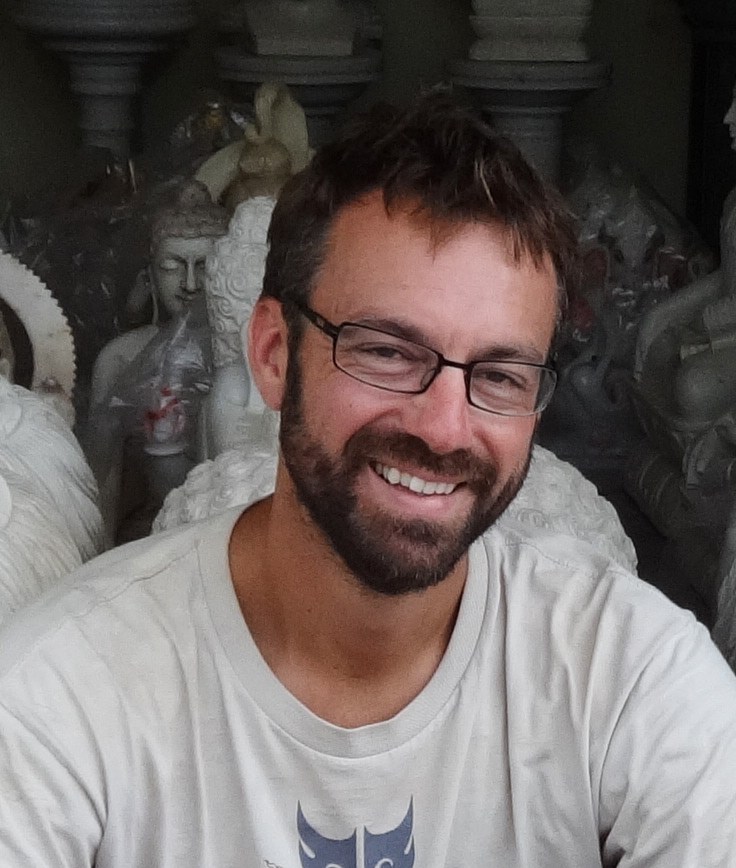 Tortora’s first job after finishing at the university was in New York City selling website development services to small businesses.

“I learned about SEO, websites, and sales, which helped me to start Lotus Sculpture a few years later,” Tortora said.

Tired of Manhattan’s relentless pace after two years, he traveled to southern India in 1999, seeking something that would enable him to earn a living, travel, and explore Eastern religions.

“And then I saw my first bronze Shiva Nataraja statue in a magnificent temple in a small town called Chidambaram, where the god Shiva was to have performed his cosmic dance. Immediately, I wanted to meet the artisans and learn more,” Tortora said.

He learned about the extremely labor-intensive process of making bronze statues via the lost wax casting method, where a duplicate metal sculpture is cast from an original piece. Tortora recognized a business opportunity in helping the artisans make and sell their handcrafted statues.

In 1999, Tortora’s parents loaned him $35,000 to finance his return trip to India to work with the artisans. He launched Lotus Sculpture in October 2000. 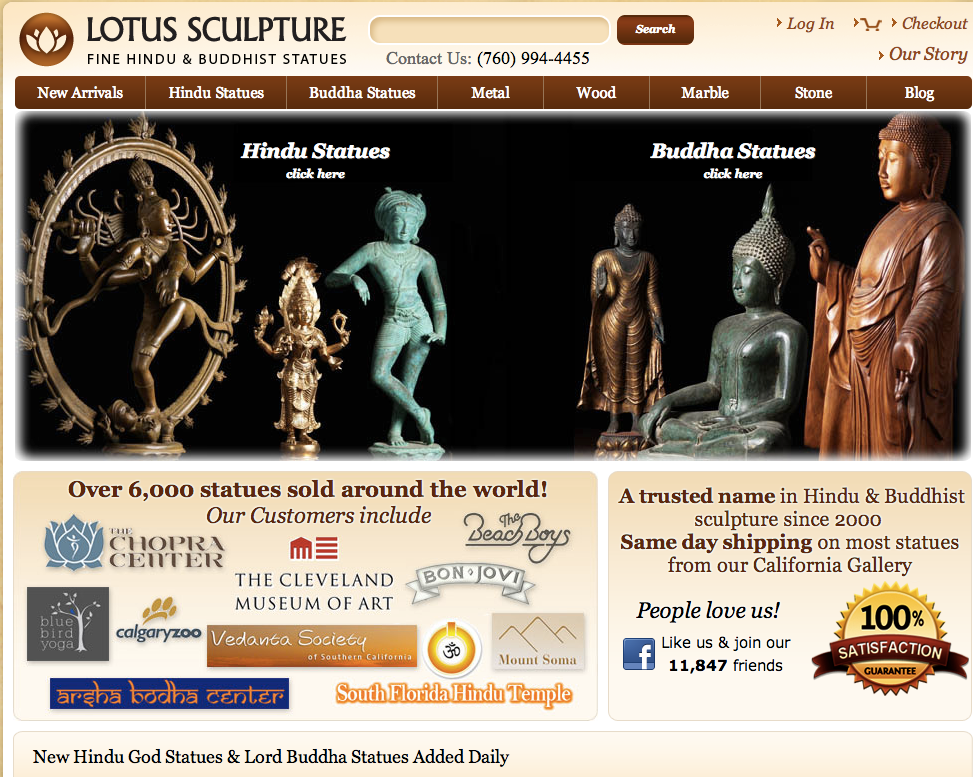 “It was easy to run and it cost $100 a month. But after two years I noticed how limited the platform was,” Tortora said.

He couldn’t add image zoom functionality, nor a UPS Ground shipping calculator. He also disliked Yahoo charging one per cent of his sales.

Tortora remained with Yahoo until 2010, when he relocated to California from New York, and discovered San Diego-based Miva Merchant.

“I am constantly tinkering with my site, always trying to make things a little better each day. Miva gives me the versatility to do this. I love working with them.” Tortora said.

Lotus Sculpture was designed in 2000 by Tortora’s friends from his first job selling websites.

It remained unchanged for 10 years; during this time Tortora made “Band-Aid” changes to his website himself.

“In 2010, I paid Arizona-based Glendale Designs $250 for my new logo, which led to the look and feel of my new design,” Tortora said.

Glendale Designs, which works with Miva Merchant, charged Tortora $2,000 for his new website design. It took one month for the design to be completed, and another month for Miva developers, who charge $70 per hour, to implement it into the new Lotus Sculpture website.

The new design enabled customers to zoom closer into artwork. The design also included videos and a shipping quote estimator on every product page and other improvements that increased conversions.

“By adding the category menu where people can filter statues by god, material, size, and price, my conversion rate went up immediately,” he said.

“Right now PayPal processes my credit cards as it has the lowest pricing and its customer service is the best,” Tortora said.

“Once an order is placed, I print the receipt, add some promotional material and a description of the deity they bought, and include it with the packed statue. I print the shipping labels from the Miva software,” Tortora said.

Tortora has hired three staff members in 14 years. His current, sole employee, Mark, has been with the company for the past four years.

Mark packs the orders and keeps the 5,000-square foot warehouse in Oceanside, Calif. in order, although this space will soon expand for extra statues.

“I am adding an extra floor of about 1,400 square feet to house three more containers from India,” Tortora said.

“I learned about title tags, descriptions, and H1 tags from my first job selling websites in Manhattan, so I applied what I already knew,” Tortora said.

He is always making subtle changes to title tags or his descriptions to see if they have any impact.

“Everything I do to my site is connected to SEO. If I change anything, add a product, or change text I always fully optimize it for SEO,” Tortora said.

Tortora’s father used to help him shred mountains of newspaper in the family’s basement when he first launched Lotus Sculpture.

“I used to wrap each statue, which ranged from three inches to nine feet high, in bubble wrap, then cushion it with shredded newspaper,” Tortora said.

But after too many breakages, he found New Jersey-based Sealed Air, which made a special foam to mold to his statues’ contours.

The hardware for the Sealed Air packing system cost $5,000 and the foam chemicals cost $1,500 but this paid for the reduced breakage and packing time.

Shipping is automatically calculated on the website for smaller statues under 150 pounds and is tied in with UPS so customers can automatically get pricing.

Customers email Tortora for shipping quotes on larger statues, which he obtains from his freight carriers, including R+L Carriers, Con-way, Roadrunner Transportation Systems, and others.

“Each artisan is different. Some have standing stock; some I commission everything they make. Some I order two pieces from; others I order 500. Some take a month, others take 18 months,” Tortora said.

By dealing directly with the artisans, Tortora says he saves money.

He has no inventory management, selling only one-of-a-kind items. When an item is sold, he removes it from the website.

Tortora uses a local bookkeeper for his company’s financial reporting. He does not use any accounting software.

Tortora pays $400 a month to have daily postings written on Facebook and Google+ to keep in front of his customers.

Lotus Sculpture’s biggest social media presence is on Facebook where it has 11,797 likes.

“Right now, I am trying every social media and while most don’t drive sales, they all have SEO implications. So I am present on them all,” Tortora said.

Fortunately, every statue he buys, sells, as he buys only attractive pieces he would have in his own home.

“The more obstacles you can take out of a person’s decision-making process while she is actively engaged with you the better chance you have to make a sale,” Tortora said.

In 2007 and 2009, U.S. customs inspected two of Lotus Sculpture’s wooden containers of statues from India. The containers lacked the stamps to prove they had been fumigated, so they were refused entry.

“The containers were actually fumigated but as the boxes weren’t stamped, I had to ship them back to India to be stamped and then returned to me again, costing $8,000 per container and four months’ delay,” Tortora said.

To protect Thailand’s ancient religious artifacts and antique Buddha images from being stolen and sold illegally, Thai customs restrict their export. But this law was not actively enforced until 2010 on newly made Buddha statues.

In 2010, one of Lotus Sculpture’s containers filled with Buddha sculptures was confiscated by Thai customs because it didn’t have the proper documentation.

“My shipping agent in Thailand now works with the Thai authorities to get the proper documents. He has to physically bring the statues to the government to get seals on them before he can export them,” Tortora said.

“After 14 years of hard work and gambles, I can take a vacation whenever I want to, I travel as part of my job, and I make my own hours,” Tortora said.

His loyal customers keep purchasing year after year. While he sells Buddha sculptures to hotels, retreats, and temples, most of his customers buy statues when they purchase new homes or landscape their gardens.

Tortora estimates 60 per cent of his customers formally worship the statues, while the rest want a sculpture of Buddha, Shiva, or Ganesh in their homes.

“Our growth has shown me that we are doing the right thing for our customers,” Tortora said.