Pinterest: How to Create Images that Convert, for Ecommerce

Curalate found that pins without a human face are repinned 23 percent more that those that show human faces. While this may seem counterintuitive, Curalate’s co-founder and CEO, Apu Gupta, offered insight.

If you’re, say, a cosmetics brand, eliminating faces from your marketing images may be tricky, but try to find alternative ways you can capture the quality and message of your brand. 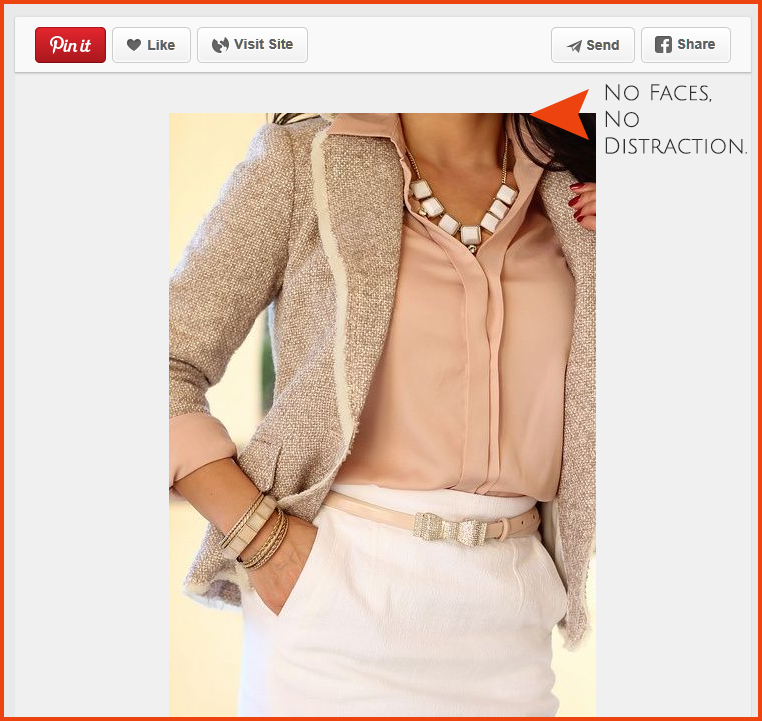 No human faces on images.

The focal point of your picture needs to stand out. Keep the amount of empty space around your product to a minimum, and use white as your background color for the simple reason that it places your product as the central point of the image.

Curalate’s research found that if your background takes up 40 percent or more of your pin, the number of repins would likely be halved or even quartered. 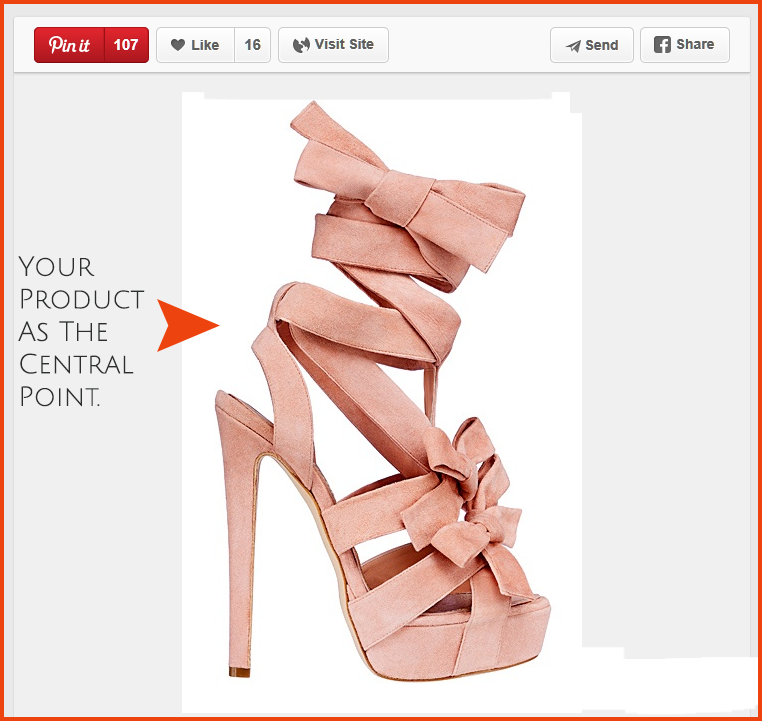 Use little background space to increase clicks on your pin.

To encourage viewers to click your pins, use a range of bold colors against a relatively plain background. Pictures that use multiple strong colors have three times the level of engagement than images that only feature a single dominant color. 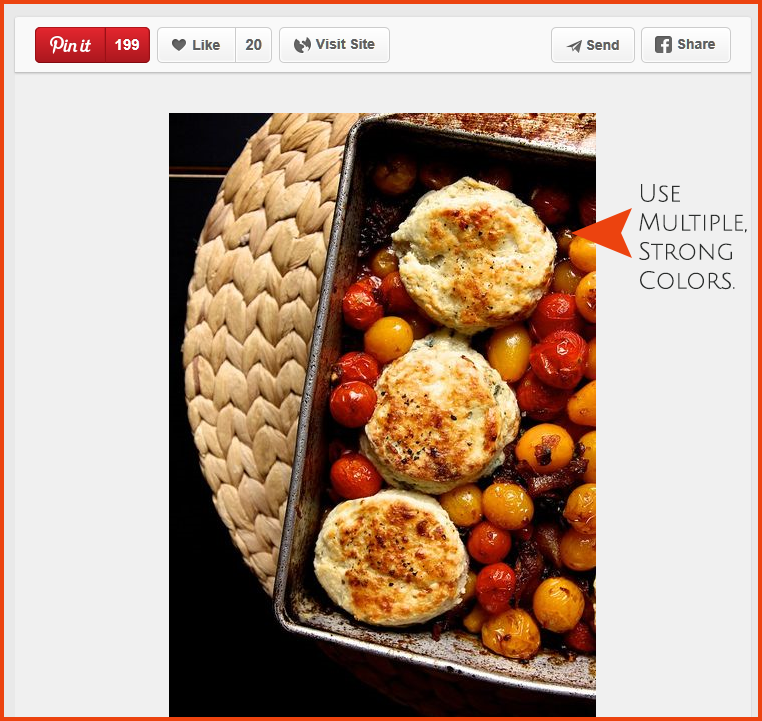 Use many strong colors.

4. Don’t Be Scared of the Color Red

Warmer colors generally encourage a more immediate call to action. The color red is said to increase your heart rate, and is often used to promote sales or encourage impulse buys. Curalate found that images with a considerable amount of red or orange will likely get twice the number of repins versus cooler colors. 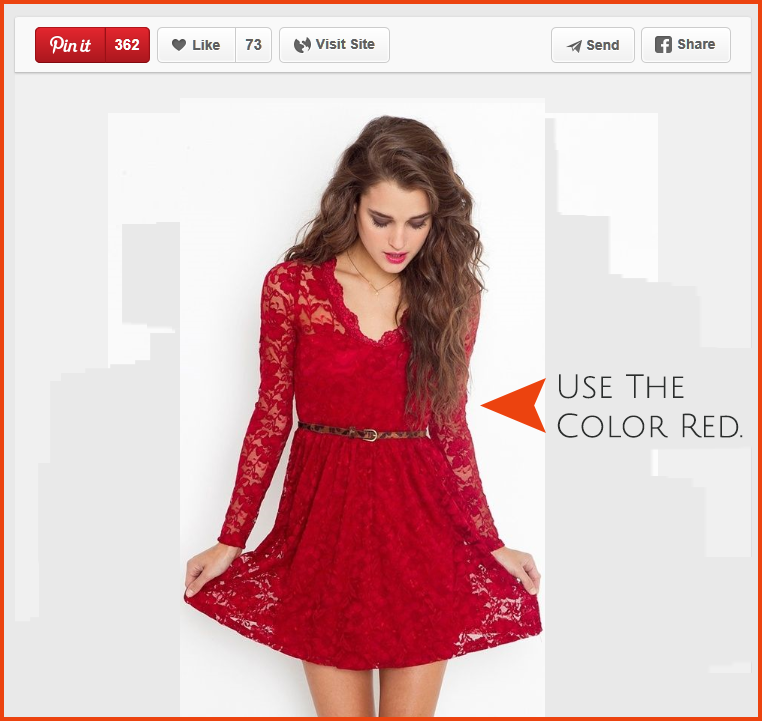 Images that contain the color red receive more engagement, according to Curalate.

Your goal is to find a happy medium. Try to balance your color saturation and lighting level. 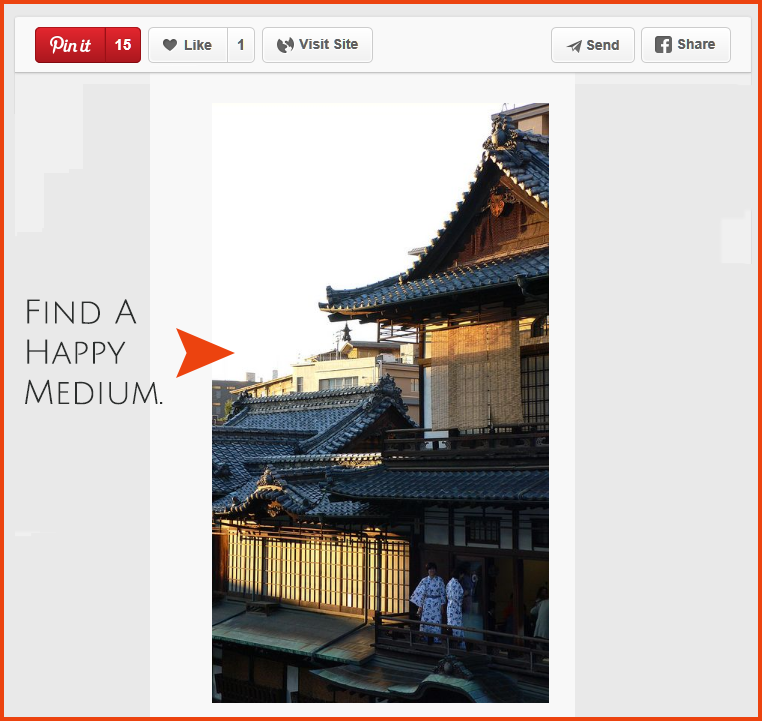 Use moderate color saturation and lighting.

6. Publish your Pictures in Portrait Orientation

Pinterest users prefer portrait orientation to landscape. Portrait helps users focus on the point of your pin, and also works well with the layout of the platform, especially for viewers on smartphones or tablets.

Publish your pictures with a “portrait” orientation.

Still a little unsure about how all of these features look when they come together?

Below is an example of what Curalate found to be the perfect picture for Pinterest. The image is called “Aunt Peggy’s Cucumber, Tomato, and Onion Salad.” It has been repinned more than 300,000 times, with a large number of likes and comments. 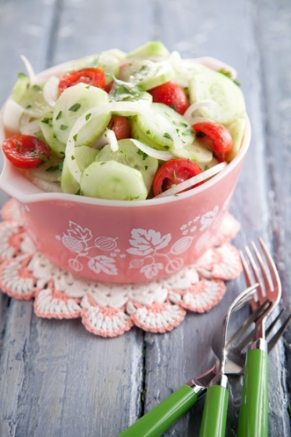 The perfect Pinterest photo, according to Curalate, is “Aunt Peggy’s Cucumber, Tomato, and Onion Salad.”

For more on using Pinterest for your ecommerce business, see my previous article, “Pinterest: Dos and Don’ts for Ecommerce Merchants.”