Like most working women yet to become mothers, Tania Tan was blissfully unaware how unfashionable and expensive maternity clothing could be.

Tan was raised in Sydney, Australia by her Chinese father and Singaporean mother, and her grandfather was a retail entrepreneur.

“He came to Australia in the 1950s knocking on the doors of the big retailers like David Jones and Grace Bros (now Myers) to purchase his goods. I believe it was very difficult for him,” Tan said.

She studied graphic design at Hornsby College and, after graduating, worked on various magazines in the U.K. and Australia, including Famous, a gossip magazine, before moving to the Pacific Magazines’ advertising department. 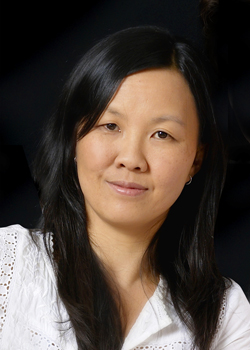 She had her first baby in 2008 in Sydney and, after maternity leave, returned to work.

“When I became pregnant with my second baby in March 2010 I couldn’t find affordable, stylish maternity work wear while everyone was dressed to the nines. I didn’t want wear dresses which made me feel like a frumpy mum who suddenly looked 20 years older,” Tan said.

Plus, they were expensive.

“A whole work wardrobe for those few months would have easily cost well over $1,000,” Tan said.

Always with an interest in fashion, Tan had taught herself to sew her own clothes since she was 12 years old.

After researching the maternity wear market during mid-2010, Tan decided to set up her own clothing brand — Eve of Eden — to sell online, with her husband Rob as the website programmer.

“This was my first foray into business and we launched mid-December 2010, two weeks before I gave birth to my son,” Tan said.

MaternitySale.com.au launched in January 2011, immediately achieving monthly net sales of around A$3,000, which have grown to about A$40,000 per month as of November 2013.

After some research, the Tans decided to use the free, open source osCommerce shopping cart system.

Apart from being free, they liked the add-ons, such as the shipping modules and image zoom add-ons that had been created by the osCommerce community.

“However, it has a few U.S.-specific bugs, such as the shipping module, so unless you have a programmer on tap like I do, it could be costly making these add-ons work within your ecommerce setup,” Tan said.

Order management is controlled by the osCommerce backend.

“We now have a few brick-and-mortar retailers who are selling our clothing range and we use the osCommerce backend to track inventory,” Tan said.

Tan designed Maternity Sale’s website and is constantly tweaking and split-testing it. She has made two major design updates to date.

“We found that making cosmetic changes to backgrounds led to a slightly higher conversion rate and higher average spend per customer. When we offered free shipping, we flagged this in a big bubble on every page,” Tan said.

“It definitely pays to shop around and negotiate if possible, and I’d definitely encourage other retailers to add PayPal. Some customers have been burnt previously by credit card fraud and feel that PayPal is more secure,” Tan said.

Digital Pacific hosts Maternity Sale, which Tan said has been cost-effective at $14.90 per month and offered excellent support when necessary.

Tan hired her first part-timer in December 2011 to help process orders, refunds, and warehouse re-stocking for four hours a week to begin with and has since hired a second employee.

“As we run Maternity Sale from our home office, we prefer to hire someone who is recommended to us as they are often around our children,” Tan said.

Like many online retailers, Tan has tried several SEO companies and has found it challenging to find one that is sustainable and ethical.

“Before Google released its Penguin and Panda updates, we had quickly worked our way to number one for many of the major search terms,” Tan said.

However, Google soon penalized Maternity Sale for some of the questionable backlinks obtained through SEO companies, making their rankings sink.

The Tans have begun a brand-new contract with an Australian company that they hope will improve the site’s organic ranking over the next year.

“We really need to bring our advertising costs down, which increased 100-fold once we came off our high Google rankings,” Tan said.

The Tans learned the hard way that they should always interview SEO companies closely and ask for several references from long-term clients.

Tan uses Australia Post, and occasionally other couriers, for shipping.

“It’s difficult getting cheap shipping in Australia as it’s such a big country; we offer free shipping Australia-wide,” Tan said. 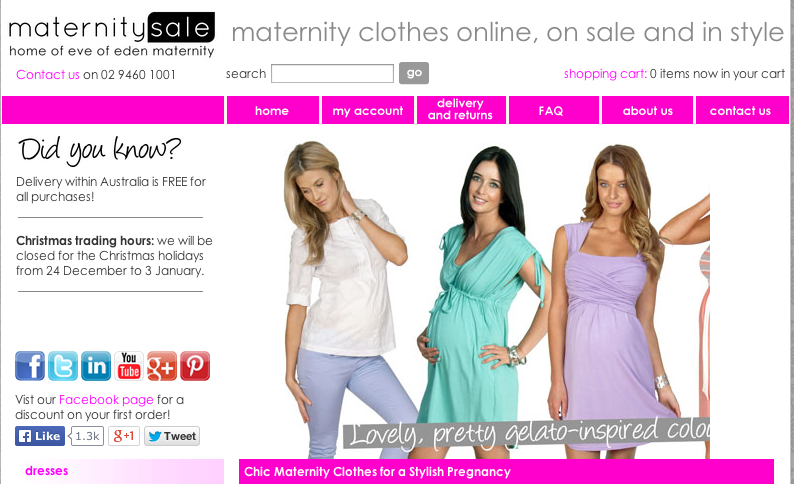 While she stocks international brands’ maternity bras, which are too complex to make, Tan designs roughly 100 product lines for Maternity Sale’s own brand, which provides the Tans with a decent mark-up on their goods. The clothes are manufactured in China, from Tan’s designs.

“Many brands didn’t have the look we wanted or were too expensive,” Tan said.

Tan keenly watches overseas fashion trends, and waits nine months from sending her designs to her manufacturing agent in China to receipt of goods.

“When I’m at the photo shoot and the clothes look so good on our models, I feel really happy with what I’ve achieved. However, production concerns can often keep me awake at night.”

Tan records expenses through Excel but is considering using a hosted accounting system, such as Xero.

“We are still at the phase of analyzing ease of use versus costs,” Tan said.

Tan focuses solely on Facebook, where she strives to include interesting information about pregnancy, babies, and children, rather than “flog product at every opportunity.”

“I like being connected to our customers and getting their feedback. People are often keen to find out about discounts and contacting me about new products that I’ve posted,” Tan said.

The Tans have three major expenses: manufacturing, advertising and shipping.

Tan had to pay cash up front to satisfy the minimum order quantities of manufacturing in China and, like other retailers, has ordered excessive stock of styles, which don’t sell well. With inflation rising at close to 10 per cent in China, she said it hasn’t been easy.

“Our advertising costs need to be reined in but this is a matter of waiting for our rankings to change in Google,” Tan said.

“We’re still in a very young stage of our business so we are still putting all the money it earns back into the company,” Tan said.

Tan believes that online retailers have to take the perspective that the customers are always right.

“Pregnant women can get upset more easily, so it’s a good idea to be as accommodating as possible. We often get calls asking for advice on sizing and it’s worthwhile spending the time trying to get the most suitable clothing for the customer,” Tan said.

She is considering adding a live chat service to her website.

One of the Tans’ biggest mistakes was to set up the company as a trust, as suggested by their first accountant.

“We made a big loss during our first year; losses from a trust aren’t transferable from year to year so that was a lot of money down the drain,” Tan said.

They have swapped to a corporate structure as recommended by their existing accountancy firm, F H Lim & Co.

Tan enjoys the daily feedback from her customers on how much they enjoy her maternity wear.

“We’ve also started selling our range into boutiques in Australia, New Zealand, and the Netherlands, which was something I never foresaw happening. I started having companies contacting me to sell products, which got me thinking that there was more of a market out there,” Tan said.

She had tried using sales agents but hasn’t found them to be as effective as dealing with her customers.

“A friend who’s in business development confirmed that the best people to increase business are the owners, as they are the ones who are the most passionate and know their product inside-out,” Tan said.