Alec Nelson grew up in the wealthy semi-rural Sydney suburb of Dural in a home that his builder father built in the 1960s. At age 11, he moved to Wagga Wagga, a small city, where his father bought a caravan — i.e., RV — park.

Nelson boarded at school in a nearby town and began his accountancy degree at Charles Sturt University in Wagga Wagga in 1994. He switched to business management but in his second year started using heroin and dropped out of university, while keeping a full-time job at an appliance retailer. 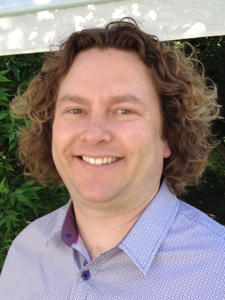 When he lost that job, Nelson answered an ad promising high pay and training as a door-to-door vacuum cleaner salesman for Kirby.

Nelson was highly motivated and within nine months he had a team traveling all over New South Wales.

Once he discovered Dubbo — population 30,000 — had a vacuum store, he approached a national chain to set up a franchise in much larger Wagga Wagga. The chain agreed.

“I tried to get clean a few times. But I didn’t overcome my addiction until we opened our own store in Wagga Wagga in 1998.”

Nelson, who secured the franchise for no money as the franchisor effectively offered vendor financing, built the business from roughly $5,000 to $17,000 per week.

In 2002, he opened That Repair Shop, servicing vacuum cleaners and other appliances, and began listing vacuum parts on eBay.

“However, the head office noticed we were getting sales outside our territory and we were told to close down the online channel, or leave the franchise,” Nelson said.

He left the franchise, receiving money for his stock but nothing for the goodwill, losing roughly $150,000 by his estimate.

Around the same time, Nelson, who had been using his Kirby contacts to receive traded-in vacuum cleaners, to then repair and sell on eBay, had his supply dry up.

“Ironically, our $12,000 per month eBay sales hid that the appliance repairs were losing money,” Nelson said.

His accountant was behind on the books, suppliers hadn’t been paid, and the building he was renting was sold, giving him a month’s notice to move. Nelson was over $100,000 in debt.

The month prior he had bought his first house, which included a huge shed. Nelson set up a vacuum repair center in the shed and kept the repair shop phone number.

Within a month, he was repaying nearly $800 per week to old suppliers — using proceeds from the repair operation — and within six months he was selling $1,500 per week of vacuum cleaner parts and accessories on eBay.

He then launched his own website, NelsonVacuums.com.au, in 2007. He first tried a setup and design from friends. It was unsuccessful. He moved to Ashop, an Australia-based hosted shopping cart. He received his first sale within hours. By 2008 gross monthly sales were roughly $15,000.

At the end of 2008 Nelson hired a prominent Sydney developer for $20,000 to create a sophisticated new website.

“The site didn’t go live until July 2010. Customers complained, were unable to figure out the fancy new navigation and search mechanism, and costs blew out and revenue dwindled to $3,000 per month,” Nelson said.

In October 2010 Nelson and his wife discussed declaring bankruptcy. But he reopened their Ashop store under the domain VacuumSpot.com.au.

He redesigned it to be plain, with simple navigation, used seemingly every search-engine-optimization tactic to get found, and had sales again.

“Ashop cost $50 per month including hosting, and we spent about $500 on a skin for it but we couldn’t add custom features. So we spent $20,000 with the Sydney-based developer, who lost us money and customers,” Nelson said.

The Ashop website would not let him access the website’s code to do A/B testing, nor to implement Google Analytics and user-friendly URLs.

Nelson then moved VacuumSpot.com.au to the open-source Magento platform in December 2011, using a developer sourced from Elance for $2,000. 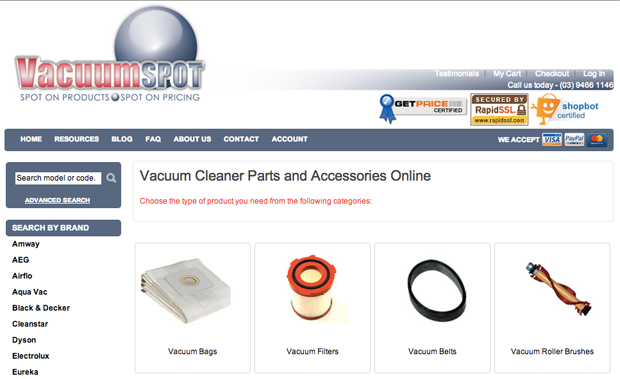 “Our [Magento] developer didn’t implement URL redirect codes and our indexed pages had errors. We also had server issues — being in charge of our own hosting — that slowed the site down. All of these mistakes cost us revenue for two months,” Nelson said.

Nelson uses PayPal Payflow Pro and ANZ eGate, a payment gateway and processor from ANZ Bank. Now that his website has high volume sales, he has renegotiated the ANZ rates from 2.2 percent to 0.87 percent on most cards, not including corporate cards, American Express, or Diners Club. VacuumSpot also accepts direct transfers and money orders.

“Every day we print the orders and simply grab and parcel them. Anything not in stock goes on to an email for ordering and it arrives the next day. It is beautifully simple and it works,” Nelson said.

“We have just migrated to Amazon Web Services for reliability and scalability. This is an enterprise level of hosting and while it is expensive at $400 per month, site speed is critical to customer conversion,” Nelson said.

“We have grown in three years from being just me part-time to three full time employees — one each in the warehouse, administration, and customer service — and two part-timers,” Nelson said.

“Our information is built into the website for our customer care section. So as we expand, all we will need are extra order packers.”

Nelson has engaged two Sydney-based firms, but he says they did not deliver without getting a penalty on the next Google update.

“About a year ago we hired Evolving SEO [a Massachusetts firm] to check URL structures and on-page issues, using analytics tools to root out harmful links and get them disavowed to help us return to rankings after a penalty, while we created the content,” Nelson said.

With over 15 years in the vacuum industry, Nelson has close relationships with all the major suppliers in Australia.

“Because we have such significant purchases, we can get special deals [from suppliers] based on volume. We often ask for a quote comparing to a supplier’s competitor,” Nelson said.

Nelson buys in bulk to get a discount and manually re-orders when stocks are low.

“We order on demand for slower moving stock; most of our suppliers ship overnight and so there is no delay to the customer,” Nelson said.

After using the Banklink accounting software for three years, Nelson has just switched to Xero, a cloud-based accounting platform, for $50 per month.

“Xero integrates with Magento. However we are currently linking it only with our bank accounts, not the website, until we feel comfortable with it,” Nelson said. “We have learned our lesson about adding too many functions to the website at once.”

“Pinterest is not a good fit for vacuum parts,” Nelson said. 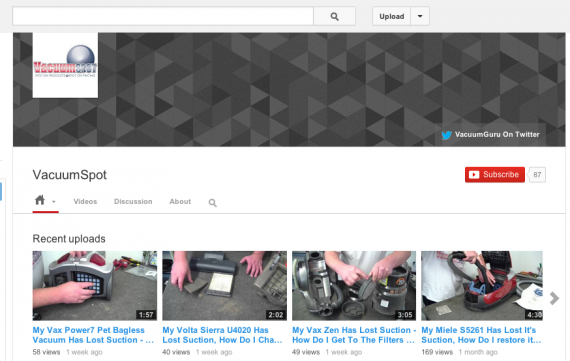 Nelson reinvests profits in his website, hosting, and site technology. But he has become more cautious about spending.

“After two very expensive errors we now pay ourselves properly and have no debts, so we will grow completely organically,” Nelson said.

“Most people don’t know their vacuum model. We ask the right questions to lead them to the correct product,” Nelson said.

While website conversion is 6 percent, over 50 percent of phone queries convert to sales.

“We list all kinds of obscure stuff, whether it is a motor for an old machine or a circuit board. We have diagrams and parts lists for almost every vacuum ever made and because we order daily we can get one-off parts within a day or so,” Nelson said.

“Initially we did not track profit, so even though we had a good turnover we were not making money,” Nelson said.

His business also needed highly trained technicians. “But because they were in short supply, when two of them were severely under-performing I couldn’t replace them.”

Nelson is most upset by the expensive website, for Nelson Vacuums, his first site, which cost him money, time, and customers.

“Being forced to learn about SEO and user experience has been pivotal to our success; we lead the field in conversion because our content is so rich,” Nelson said.

“Recently, I got a distress call from a customer needing a huge amount of product overnight to fix a problem for him. Because of brilliant supplier relationships I delivered the goods and earned myself my biggest single day profit,” Nelson said.