In April 2013, Lowe’s, the second largest home improvement retailer in the world, got a lot of attention when it released a series of six-second, how-to videos on Vine. The Lowe’s Fix in Six Vine program was noteworthy, in part, because it sought to provide real, useful content, in just six seconds.

“I’ve been critical in the past of Vine, and brands’ often clumsy attempts to turn it into the next venue for ‘clever’ real-time marketing,” wrote marketing export and speaker Jay Baer, who is also the author of “Youtility,” a book about turning marketing upside down, if you will, and offering really useful content. “But with a new series of 10 inherently useful Vines, Lowe’s demonstrates that six seconds is plenty of time to create Youtility.”

Baer and other content marketing experts suggest modern consumers are bombarded with advertising and promotions, and that given this marketing “cacophony” there are only really two ways to get and keep a potential customers attention. Your business must either be amazing or it must be useful. And frankly, amazing is hard.

In the case of the Fix in Six Vines, Lowes seems to be making Baer’s point, demonstrating that useful content is very effective as a marketing tool.

Lowe’s approximately 55 Fix in Six Vines have generated more than 15 million impressions and thousands of shares and likes on a number of social media sites, according to a Google Think Insights.

While Lowe’s certainly has expenses associated with the Fix in Six series — as an example, it worked with prominent advertising agency BBDO New York to produce the spots — how much would one have to spend for advertising to reach 15 million enthusiastic folks?

It seems like it might be hard to beat the sort of success this promotional campaign is enjoying. Of course, choosing to provide useful content, even in six-second videos, can be a lot more work for marketers in terms of creativity, planning, and execution. Lowe’s seems to be demonstrating that useful content is worth the effort.

Lowe’s Vines don’t take on major problems, but rather focus on simple and thoughtful solutions. For example, in January, just a couple of weeks after Christmas, Lowe’s released a Vine showing how to store ribbon left over from wrapping presents on a hanger. Another Vine released in January, showed how to store Christmas ornaments in an old egg carton.

Notice also that Lowe’s is not pushing or promoting products that it sells. As an example, a November 2013 Vine shows how to remove hard water stains using a lemon. Lowe’s doesn’t sell lemons, but it still published the video, apparently to be helpful to do-it-yourself minded shoppers.

In another Vine, Lowes shows folks how to use aluminum foil to protect a paint tray. Baer points out that the Vine “doesn’t advocate for a purchase, and in fact actually recommends to the viewer an alternative so that they don’t have to buy a product from the company. Now that’s taking the long-term view of helpfulness and customer acquisition.” Lowe’s useful content is not even designed, it would seem, to drive immediate sales, but rather to engage shoppers and create a long-term affinity. Put simply, the aim seems to be to make customers for a lifetime rather than focusing on simply making a sale for the moment.

Although the Fix in Six videos are shot for and first published on Vine, these diminutive videos have proven to be very good material for sharing across several sites. In effect, Lowe’s publishes and republishes the Vines, using the platform as a sort of short-format YouTube, from which content is intended to be shared.

On Vine proper, Lowe’s has nearly 16,000 followers who regularly view and share the videos. All of these Vines are published to Lowe’s Twitter feed — remember, Twitter owns Vine — which had more than 144,000 followers at the time of writing.

On Facebook, where Lowe’s has more than 2.8 million likes, these Vines are popular posts, encouraging shares, likes, and comments. The series is even popular on Pinterest, where Lowe’s Fix in Six has about 100,000 followers, who, no doubt, share the Vines too. 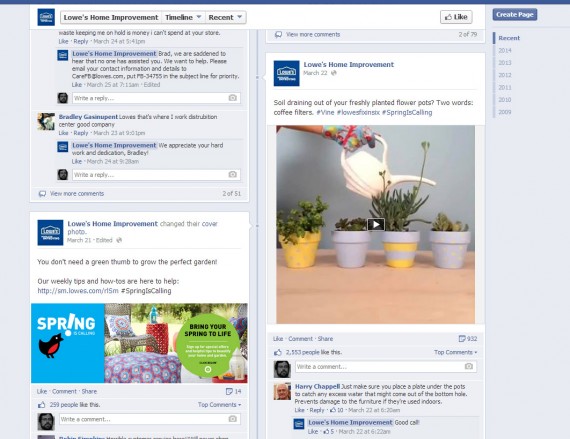 Lowe’s home improvement channel on YouTube, which has about 82,000 subscribers, includes the Vine shorts along with many longer format how-to videos that are also aimed at helping consumers.