In late October, Microsoft’s Bing began powering all of the natural and paid search results in Yahoo!. Now, advertisers who wish to purchase sponsored search ads in either Yahoo! or Bing must do so through Microsoft adCenter. Given that the alliance has a combined market share of almost 30 percent of web searchers, and that Bing’s market share is rising faster than Google or Yahoo!, the transition is a big event.

On November 18th, at a SEMPO Boston event I moderated at Microsoft NERD in Cambridge, Massachusetts, I was able to get answers to many of the questions that I had regarding the transition. Both Microsoft and Yahoo! provided individuals, as panelists, who helped to manage the transition, and they were a wealth of information. 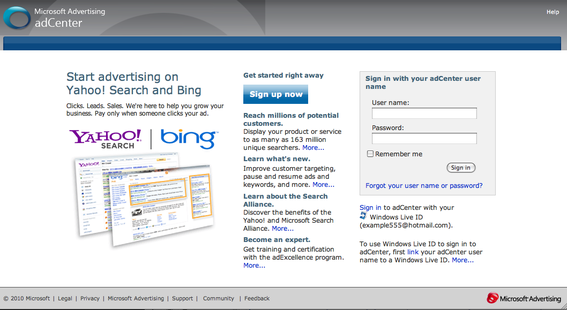 In attendance were representatives from search agencies and companies of all sizes. The answers I received from the following informal audience polls were especially telling:

The general consensus was that people liked the Google AdWords control panel much more than the Microsoft adCenter interface, and that this had a big influence on their budgeting decisions. Google has spent many years fine tuning its account management system, and while I agree that it is far superior to Microsoft adCenter, I was surprised to hear that the user friendliness of Microsoft’s adCenter was discouraging advertisers from taking advantage of this growing marketplace.

Initially, the reluctance of some advertisers to increase their adCenter budgets sounded like an opportunity for more daring advertisers who can put up with the clunky adCenter interface. After investigating this further with my Exclusive Concepts’ pay-per-click team, however, the inherent weaknesses of Microsoft adCenter became clearer. (Disclosure: I am the founder and president of Exclusive Concepts, a search-marketing consulting firm.)

Getting Started with adCenter

To start, adCenter makes it easy for someone with an AdWords campaign to import his or her campaigns in order to get started quickly. While that is a good feature, the best practices for managing campaigns in AdWords and adCenter are different, because the systems and algorithms that power each platform are different. As a result, the easy-import feature may lure advertisers into a fall sense of security. For example, setting up “negative keywords” properly can have a huge impact on a campaign’s profitability, and they need to be configured much differently in adCenter than they are in AdWords.

Targeting Yahoo! or Bing, But not Both

Another potential source of consternation for advertisers involves the ability to target either Yahoo! search or Bing separately. Currently, you don’t have the option to target your ads only to Yahoo! search, for example. This is important because Yahoo! and Bing are each major web properties in their own right, and each excels at catering to different demographics of searchers. As a result, advertisers could expect Yahoo! to perform better than Bing for certain queries, or vice versa, but they won’t have the opportunity to target each engine separately.

A similar but different concern about Microsoft adCenter involves its user interface (UI). While Google AdWords is smooth and quick, Microsoft adCenter feels clunky. In addition, it requires hierarchical navigation, which becomes increasingly frustrating when you try moving between campaign keyword lists.

Listen to Scott Smigler discuss his professional background and offer advice for merchants on pay-per-click advertising.

The main UI screen only allows you to create custom time frames of 31 days or less, making the ability to chart and study long term trends difficult and time consuming. This is also true with the inability to quickly see costs to convert and something as elementary as conversion rates. It is not hard to do the math, but it is an important statistic to measure and gauge your performance by, making its absence a bit of an annoyance.

The management UI of adCenter is just too basic in light of how much search advertising has matured in recent years. A lot of data is being made available in reports, though it is not as actionable as if it were available in the UI. All these factors combined may lead a user to feel like they are operating in a black box, and the transparency is lacking.

Although Microsoft is making changes to adCenter, they are often made with little or no notice to users. As a result, it can be hard to anticipate what to expect and it can be disheartening for retailers considering increasing budgets on the platform.

Furthermore, during the SEMPO Boston event I moderated, I asked the Microsoft and Yahoo! panelists what the top priority for the transition team would be going forward. Their answer was rolling out their search partnership internationally. In my opinion, that was the wrong answer. I believe the first priority should be improving the technology that powers the adCenter management console in a way that gives advertisers more control, and more advanced performance analytics.

Even with all of the shortcomings, there is hope for adCenter. If Microsoft focuses more on making the UI easier to use, bringing greater transparency to its ad delivery, and opening clear lines of communication, Microsoft will show a commitment to its users and will be rewarded with increased spending levels.

Indeed, Microsoft and Yahoo! are listening. At the SEMPO Boston panel, I found the panelists to be eager to hear candid feedback from advertisers, rather than stubbornly defending adCenter’s shortcomings. While their collective message was that growing internationally, and thus increasing their user bases, was a priority over improving the software, they did acknowledge the need for their product to mature.

Despite all of its shortcomings, while I cannot advise advertisers to rapidly increase spending on adCenter, I cannot advise people to ignore it either. As mentioned earlier, combined, Yahoo! and Bing influence a very large share of online shoppers and searchers. The product will improve over time, and as it does, advertisers will find it to be a lucrative advertising venue. Until then, we are just in the beginning stages of what will be an important change in the paid search advertising landscape.