Unfortunately, good retail inventory management isn’t always that simple. When a store has too much inventory it may have to slash prices to free up working capital, which, in turn, lowers margins and profit. Conversely, if a store sells out of a product, it suffers an opportunity cost, since it could have sold more if it had more.

Sell-through rate, which is sometimes spelled sell-thru, is one of a few KPIs — key performance indicators — that can help retailers properly manage product inventory.

How to Calculate an Inventory Sell-through Rate

Perhaps the most common way to calculate the inventory sell-through rate for a given product is to divide the units sold by the initial inventory for the time period you’re considering, perhaps a week or a month.

Consider an example. Imagine you want to know last week’s sell-through for cans of San Pellegrino Aranciata, a naturally flavored and extremely tasty sparkling orange beverage that you sell in your online beverage shop.

If you started last week with 100 cans of Aranciata and sold 75 cans, your sell-through would be 75 percent. This is the 75 cans you sold divided by the 100 cans you started with expressed as a percentage (the answer is multiplied by 100). 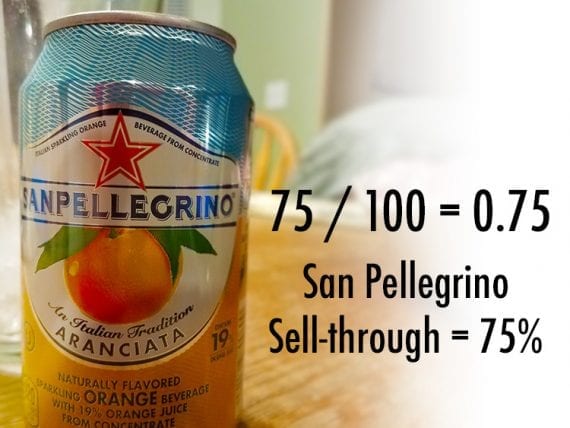 If you started the week with 100 cans of San Pellegrino and sold 75 cans, your sell-through rate would be 0.75 or 75 percent.

There are at least two common variations of sell through.

The first of these variations compares the units sold with the units received for a given time period. This version of sell through might be used to monitor products that are regularly restocked (replenished) since it focuses on incoming products.

The second variation uses the number of units at the end of the period. This could provide a better view of the units sold for businesses that have frequent deliveries that might make sell through more difficult to compare week-to-week or month-to-month.

The particular method you choose to calculate a product’s sell-through rate will have a lot to do with what you want to measure.

Monitor the Sell Through for Seasonal or Fashion Products

Sometimes retailers bring in products for a specific season. For example, a retailer might only stock snow boots (at least in any significant quantities) during the winter.

Imagine a retailer brings in 1,000 snow boots in various sizes on November 1, 2016. This retailer wants to sell out of the snow boots by the middle of February 2017, say the 14th. There are 15 weeks between these two dates. If the retailer wanted to sell the boots evenly throughout this period (for the sake of an easy example), it could monitor the weekly sell-through rate and compare consecutive weeks to get a good idea of whether or not it will sell out of the snow boots on time.

The retailer might bring in additional inventory, generating more sales than could have otherwise been possible and, because of those additional sales, increasing profit.

Imagine an online toy store has room in its warehouse for 100 boxes of jigsaw puzzles. This toy store has typically kept an inventory of five each of 20 different puzzle designs.

The toy store wants to have a constant flow of new designs, too. That means that it will have some puzzles that it sells out of and never replenishes.

This toy store might use the sell through to help decide which puzzle designs to restock and which ones to switch out, if you will, for a different design. If the jigsaw puzzle picturing a group of dogs playing poker has a monthly sell through rate of 80 percent, it is probably a keeper. Meanwhile, if a puzzle picturing the sand on a beach has a monthly sell through less than 10 percent, it might be best to sell out of it and replace it will a different design.