Online shoppers use a variety of devices — smartphones, tablets, laptops, personal computers, and televisions — to discover and buy products online. In response, ecommerce businesses need a multiscreen strategy for both marketing to potential customers and providing those shoppers with a good browsing and purchasing experience.

An August 2012 Google survey found that 67 percent of America’s online shoppers might start looking for products or product information on one device and continue the purchase process on a second one. 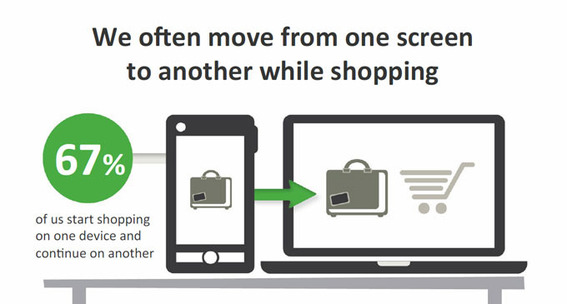 Google reported that many shoppers use multiple screens in the process of making a purchase.

There are many possible scenarios where multiscreen shopping makes sense.

Imagine someone riding a train on an evening commute and searching for a birthday gift for a son or daughter on an iPhone, but waiting until later in the evening to consummate the purchase from a laptop. Or what if you just happened to be watching the latest episode of Grimm on Hulu, when a commercial or even a character in the show inspires you to look for summer dresses? You might find one or two on your tablet during a commercial break, but complete the purchase on a desktop in the den. 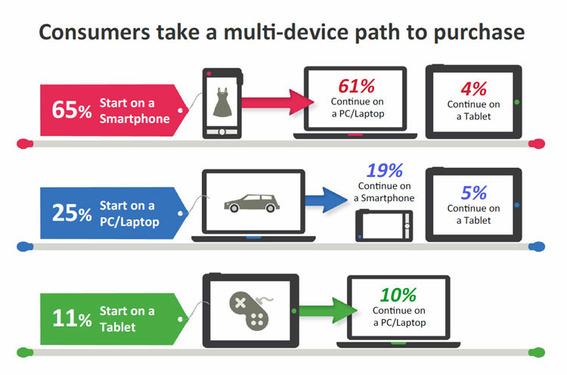 Shoppers may use more than one device over time to shop for a single item, as shown in this graphic from the Google study.

With so many paths — “screens” — to purchase, online retailers should consider a multiscreen marketing and usability strategy. What follows are multiscreen-marketing dos and don’ts for ecommerce merchants.

Do Offer a Useful Mobile or Television App

“Smartphones are the backbone of our daily media interactions,” Google reported in its study, The New Multiscreen World (PDF). “They have the highest number of user interactions per day and serve as the most common starting point for activities across multiple screens.”

Mobile — or even television — apps that are informative and useful give shoppers a reason to be familiar with your business and a channel to find your products. Focus on an application to really provide value. Columbia, as an example, has a helpful application called “What Knot to do in the Great Outdoors.” It shows users how to tie a knot for a given outdoor activity. Shoppers who use the app may be more likely to purchase from Columbia later.

Do Have a Responsive Site

A responsive site is one that organizes page content so that it may be easily read, seen, and used regardless of the size of screen or type of device. It focuses on giving shoppers the same helpful content, whether they visit an online store from a tablet or a television.

In May, digital agency Responsive Presence, reported that 61 percent of people who visited a site that was not responsive went on to visit another, competitive one. This implies that not having a responsive site that is optimized for everything from a smartphone to a television could mean you’re losing sales.

In addition to a responsive design, a good multiscreen-optimized website should serve up right-sized images, media, and content to ensure fast load times.

About 15 percent of mobile web users will abandon a website if it has not fully loaded in 5 seconds, according to KISSmetrics. No retailer wants one-in-six potential customers leaving simply because a site was too slow.

Do Use Complementary Technology

A good multiscreen ecommerce strategy might also take advantage of complementary technology. For example, Responsive Presence also reported that the typical user reads or responds to an email message in about 90 minutes, but answers a text message in about 90 seconds.

This statistic implies that text messages are, perhaps, more likely to get a shopper’s attention. As such, online retailers might want to start collecting mobile numbers along with email addresses for both transactional communications — such as order confirmation or shipping notices — and marketing ones.

For other complementary technologies, consider mapping tools that first collect a user’s location. Or, create applications for the X-Box, if that is where your prospects are.

“If you’re wondering how to make your products seem more exciting online, you’re asking the wrong question,” says marketing expert Jay Baer in his recently released book, Youtility. “You’re not competing for attention only against other similar products. You’re competing against your customers’ friends and family and viral videos and cute puppies. To win attention these days you must ask a different question: How can we help?”

From product descriptions and images to blog posts, all of your site content should be aimed at helping your customers.

Be careful not to trade substance for speed or ease.

Shoppers who visit your site from a desktop computer and then later from a tablet or smartphone expect to find the same content. They will be pleased if your site has been optimized for touching and swiping. But if you’ve hidden content, in an effort to mobilize, you’ll be in trouble.

Imagine the shopper who sees a blog post on retailer’s website about how to cast a fly fishing rod. The post includes a helpful animation demonstrating how to turn your wrist, hold the rod, or similar. The shopper is enthusiastically telling a friend about the video later when they’re sharing lunch and tries to open the blog post on a Samsung smartphone. Unfortunately, the mobile version doesn’t include the animation, disappointing the shopper.

Don’t Use a Mobile Domain

Google recommends that you don’t use separate domains for the various versions of your website. Doing so can have a negative effect on your store’s search engine ranking, and, perhaps more importantly, on your branding.

The various domains might also be confusing to shoppers. What would happen if a smartphone shopper pins a product image from your mobile site on Pinterest or posts about a product on Facebook? That shopper’s friends and family members might try to follow the Pinterest or Facebook link, only to land on the mobile site from a 21-inch computer monitor.

Although pop-ups have been shown to work well for newsletter registrations or similar actions, they can be a nightmare for mobile or even television users. As a general rule for a multiscreen strategy, don’t use pop-ups. If nothing else, use a responsive design that converts the pop-up to a banner or similar on devices like smartphones, tablets, and televisions.

Videos are an excellent way to communicate a product’s value or provide a site visitor with helpful, useful information. But when that video won’t play on a mobile device, it will only frustrate some potential customers.