MailChimp, a popular email marketing solutions provider, says that the new Gmail tabs that are intended to help users clean up their inboxes have negatively impacted open rates for email marketing campaigns, but that there is no need to panic.

Google began introducing its new tabbed Gmail format in May, but rolled out the update to thousands of users this month. We first addressed the new format in “Will Gmail’s New Tab Layout Affect Ecommerce Merchants?.”

By default, many marketing emails are relegated to a “Promotions” tab. Although Gmail users can change the tabs for their inboxes, the new tabbed format had many email marketers and email solutions providers concerned that it would harm email marketing. MailChimp’s Matthew Grove is one of the first experts to put data to the question.

Gmail has introduced tabs into its layout.

Grove found that open rates from Gmail users dropped for three consecutive weeks after the introduction of the new Gmail tabs. Prior to the introduction, for some 15 consecutive weeks, Gmail average open rates hovered at about 13 percent on weekdays, according to Grove. But they fell nearly a percentage point, to just a bit over 12 percent, when Gmail tabs were first introduced. 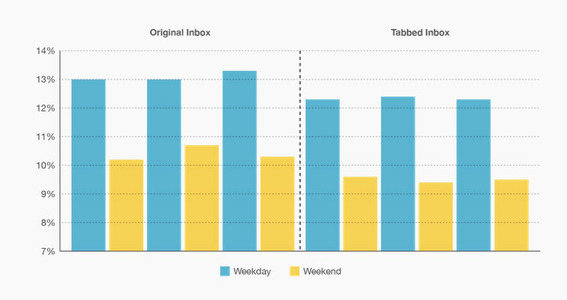 Gmail tabs have had an effect on open rates, according to MailChimp.

“From looking at a year and half’s worth of data, I can say that kind of behavior [lower open rates] isn’t normal. I’m not willing to declare an emergency just yet. After all, I don’t even know what the adoption rate is on Gmail’s side. However, I would say this is an early indicator, and we’re definitely keeping our eye on it,” wrote Grove on the MailChimp blog.

There are at least two ways that marketers might look at a 1 percent drop in marketing email open rates among Gmail users.

First, 1 percent — really less than 1 percent — doesn’t seem like much. Since Gmail users can easily move emails from one tab to another, the impact might not even be that much for messages coming from favorite brands or stores.

Some even believe that the Promotions tab might be helpful for marketers, since “your emails will land among fewer contemporaries. This means less chance of mass-deletion. It also means a higher chance of grabbing attention,” wrote Amanda Gagnon, an education-marketing associate for email solutions provider AWeber on that company’s blog.

What’s more, tabs do actually make the email experience better for users, and as a rule, marketers should always be on the customer’s side. And it may well be the case that the folks not opening your emails in the Promotion tab would be the least likely to actually convert anyway.

This first view of the drop in open rates is neutral or, perhaps, even positive. But there is a second way of looking at a nearly 1-percent decline in open rates among Gmail users.

Remember that a 1-percent decrease from an open rate of about 13 percent to one of about 12 percent is actually a 7.69 percent change. Imagine that you have 40,000 customers subscribed to your promotional emails. Before Gmail tabs you would have expected to receive about 5,200 opens. But after the introduction of Gmail tabs you would expect 4,800, about 400 fewer email opens. If you had a conversion rate of 5 percent you would make approximately 20 fewer sales as a result of a given marketing email campaign. A 2.5 percent conversion rates would result in 10 fewer sales.

Each of these points may have merit. Yet, no matter how you view Gmail tabs, you still need to deal with the impact to open rates.

Email Marketing Should Be about Consumers

Email marketing has generally worked best when it has provided consumers with some real value, either in the form of information or discounts. And while the tabbed Gmail layout might make it easier for some users to mass delete messages under the Promotions tab, those users who find your email content helpful, informative, or full of value, may continue to read your messages or even drag them to the Primary tab where they will have a front row seat and a lot less competition.

For email messages, try to give the recipient something that is really useful, personalize that offering, and make it clear in the subject line what that value is.

Part of adding value might simply be segmenting your campaigns so that recipients see products or offers that are likely to appeal to them. This sort of segmentation may counter any impacts of the Gmail tabbed layout. As an example, MailChimp found that segmenting a list boosted open rates about 14.4 percent and increased clicks by some 14.9 percent.

“Customers are more likely to open an email that aligns with their interests. As a marketer, segment … email lists based on people’s backgrounds…their shopping history. As people sign up for your newsletter, separate them into lists by leads, customers, purchase activity, interest, demography or even geography. When it’s time to send emails, all you have to do is find the specific list you want to target and send,” wrote Asmaa Mourad on the E-Nor analytics blog.