The are indications that the USOC and IOC seek to stop all sponsors from using Olympic terms and emblems on social media and in content marketing.

The Olympics are an international spectator event. Millions, if not billions, of people worldwide will follow the competition. There is a real sense in which everyone in the world has a bit of ownership. But unfortunately, the IOC and USOC have decided to adopt strong tactics to make Olympic sponsorships more valuable.

Effectively, these organizations have stated that they will pursue commercial entities that use Olympic intellectual property and which are not official Olympic sponsors. The apparent goal is to make sponsoring the Olympics more valuable, since only Olympic sponsors will be able to use the word, “Olympic,” or employ other Olympic phrases and images.

According to an ESPN report, the USOC has already begun to warn some American businesses not to post about the Olympics.

How Not to Mention the Olympics

The USOC and IOC seem to be trying to prevent any possible use of the Olympics. According to a report on Adweek, marketers should avoid the following.

Most businesses would agree it makes sense to not use Olympic logos and that sponsors that have paid a lot of money should be protected. But there is a significant difference between protecting a logo and telling businesses they cannot mention the word “Olympics” or wish a favorite athlete good luck on Facebook.

Imagine, for example, what sort of response you would get if the National Football League suddenly said that only official sponsors could use the phrase “Super Bowl” on social media or in content marketing? 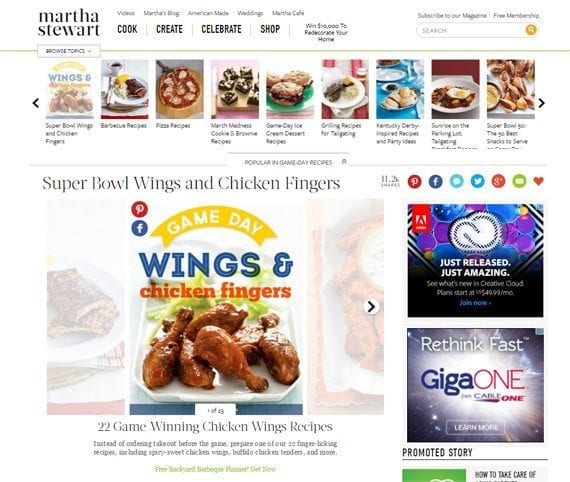 By way of comparison, would it be appropriate for the NFL to stop Martha Stewart from publishing Super Bowl chicken wing recipes?

What would be the response if the NFL sent a cease-and-desist letter to Martha Stewart for publishing Super Bowl chicken wing recipes? How would it be if the NFL sued a local pizzeria in Seattle for posting #GoSeahawks on Twitter? These things sound absurd. Nonetheless, this is precisely what the USOC and the IOC are doing.

What’s more, these Olympic committees can probably enforce this level of trademark protection. The IOC requires any nation that wants to host the Olympics to pass special national trademark laws that provide stronger than usual limitations on the use of Olympic trademarks and emblems.

The provision that applies in the United States is U.S. Code 36, Subtitle II, Part B Chapter 2205, Subchapter I. This federal law allows the USOC to sue businesses that use Olympic trademarks “for the purpose of trade, to induce the sale of any goods or services, or to promote any theatrical exhibition, athletic performance, or competition.”

This provision has been around for a long time. The difference is that previously the USOC has not tried to apply it to social media or content marketing in this way. The bottom line now is that businesses need to be extremely careful about how they use or mention the Olympics.

For the past couple of months, I have been advocating that you use the Olympics in your content marketing. In fact, I explicitly mentioned it in four posts.

In my defense, in each post I encouraged you to abide by trademark laws and all of these were published before the USOC and the IOC began discouraging social media and content marketing posts. I believed you could employ the Olympics in your content marketing in the same way that you might employ the World Cup or the Super Bowl.

Given these new developments and the letters the USOC has sent to some companies, it may be best to avoid mentioning the Olympics altogether.