Ten years ago, a tiny software community launched free Microsoft-like programs for those with UNIX or Linux computer operating systems. A few months ago, this software community—known as KDE—rolled out its first free Office-style software for Windows users. 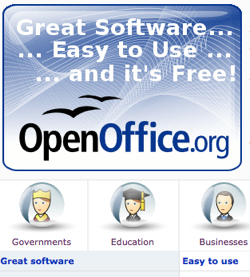 It’s a competitive first for KDE, and indicative of an industry shift. The shift is toward software that works on cross-platform computers and provides a free or low-cost alternative to the long-standing monopoly held by Seattle-based Microsoft.

“This recent development is to make sure that all of our applications are cross-platform, working even on Windows and Mac platforms,” says Wade Olson, spokesperson for KDE, makers of the free KOffice version of Microsoft-like writing, spreadsheet, drawing and other favorites. “We’re following the model set out decades ago by Linux and BSD operating systems, which were built freely to be options or alternatives to UNIX.”

Indeed, KDE’s KOffice suite joins scores of other open-source MS Office alternatives. In a poll conducted by ReadWriteWeb.com of about nearly 1,700 computer users, Microsoft’s Word still ranks as the most-used word-processing program. But at 50 percent of the market share, its popularity is waning to such open-source alternatives as the word-processing programs of Google Docs (16 percent) and Open Office (16 percent).

“We provide a service that’s both welcome to someone who can’t financially support Microsoft or, from a freedom perspective, anyone who wants to avoid the monopoly or document lock-in of Microsoft Office,” Olson says. “I can honestly say that within the last two days someone sent me an email where one was Office 2007 and 2003 and we have issues seeing each other’s documents. It happens all the time, because someone has a document standard that isn’t open and able to be modified, that we can’t see each other’s stuff. This has got to quit.”

Several recent developments have brought open-source software to the forefront. Microsoft has just come out with its Office Open XML cross-platform format—a format that was supposed to open up Microsoft’s Office suite to accept outside document styles. While Olson indicated initial workability issues with Office Open XML, there’s been recent progress, says Doug Mahugh, senior program manager on Microsoft’s Office Interoperability team: “Hundreds of independent software vendors, such as Apple and Novell, are working across a variety of platforms including Linux, Windows, the Mac OS and the Palm OS, to offer solutions that support Open XML today.”

Meanwhile, Google rolled out its own open-source Office-style suite, Google Docs, now in its beta phase. Sun Microsystems also is now bundling prompts to download OpenOffice, the most-popular open-source Office alternative, with its Java updates for Window-based PCs. This could be viewed as a blatant move to push Microsoft alternatives.
Additionally, Sun Microsystems partnered with 520 other software providers and private/government agencies in what’s known as the Open-Document-Format Alliance to roll out the first cross-platform reader of open-source files. Called the ODF Plugin, it’s downloaded for free and enables any Microsoft Office user to open, edit and save any of the “off brand” files without having those programs downloaded to a given desktop.

“It provides an easy transition for small business owners,” says Marino Marcich, managing director of the international Washington, D.C.-based ODF Alliance. “This means that small business owners that continue to use Microsoft Office can enjoy compatibility with the rapidly growing community of Open Document Format users and applications. And Microsoft has promised to implement support for ODF in Office by the middle of 2009. With that, is there any reason for consumers and government offices not to switch to the open document format? Until now, people have been locked into a single Office suite. With this, it increases choice and cost savings—that’s the bottom line.”

The open-source offerings we tested didn’t have the template, font or clipart varieties that come with Microsoft’s suite, but most came with PDF export abilities and ODF Plugin readability. Many also include add-on functions, like real-time sharing or multi-media players directly inside text documents, which outpace what’s available now on older Microsoft Office suites.

“Office has changed as people’s work has changed and the alternatives, for the most part, have aimed to meet the needs of the past,” says Michael Croan, senior marketing manager for Microsoft Office. “…Productivity software has always been a competitive market, and customers have always chosen from a variety of alternatives, which we welcome — it’s healthy for the industry as a whole and good for customers.”