Cheapbowlingballs.com is a three-year-old ecommerce business that sells bowling balls and accessories. The site has Google and Yahoo! pay-per-click campaigns running with ad spend of $2,000 and $1,000 per month, respectively. Cheapbowlingballs.com has approached Practical eCommerce for help with its pay-per-click (PPC) campaigns. Currently, the site averages $23 cost-per-conversion with 0.95 percent conversion rate. As a note, cost-per-conversion needs to be low enough to justify the cost of the pay-per-click program. And, as it relates to conversion rate, I usually believe an average ecommerce business, with the proper PPC program in place, and conversion friendly landing pages, should be converting at 1.2 percent to 1.5 percent. 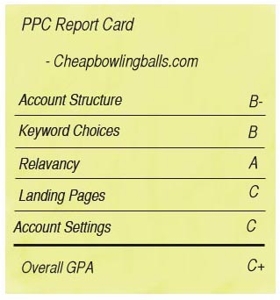 The Google account is nicely broken down into 117 different brands and ball name Ad Groups. It also includes a separate campaign for competitors (this includes competitor keywords — competitor brand names, websites and products) and a separate campaign for generic keywords. Having separate campaigns helps with cost control since Google allows for ad spending limits at the campaign level, thereby allowing Cheapbowlingballs.com to set separate budgets for (a) brands and ball names, (b) competitors and (c) generic keywords. The Yahoo! account, on the other hand, looks nothing like it. The account has just three active campaigns with just a few ad groupings that combine loosely related keywords.

As such, Cheapbowlingballs.com should use Yahoo!’s Third Party Campaigns tool to import the Google account structure into Yahoo!. As it is, the site is losing potential traffic and paying more than it should be for the Yahoo!-generated clicks. Account structure is extremely important to keep a Quality Score as high as possible.

The Google account could be improved by adding a couple of common modifiers. Currently, every keyword includes variations such as “buy,” “purchase,” “on sale” in front of every ball brand/name, which is good. However, those should be supplemented with words such as “great,” “best,” “new” and any other relevant descriptive words for generic keywords — such as “great bowling balls” and “best bowling balls.”

Cheapbowlingballs.com’s poor Yahoo! account structure compromises its keyword capacity. Under the current structure, standard match should be turned on (Yahoo!’s standard match is similar to Google’s exact match) to filter incoming traffic and improve the overall quality of the PPC generated traffic.

Similarly, match types in Google should also be actively tested. All keywords are set to broad match even for broadest possible words: “bowling,” “bowling ball” and “bowling balls.” Testing all three match types (standard match, exact match, broad match) could dramatically improve overall traffic quality and increase the conversion rate, especially since Google had recently updated its broad match policy to display ads for secondary search queries. If Google’s Web History is in use, advertisements related to search queries would be displayed for combined themes.

For example:Type in “chocolate candy” in Google and look at the ads. Erase your search query. Type in “bags”

Notice how ads are displayed for combined themes of “bags” and “chocolate candy.” That’s broad match inconsistencies at work.

Relevancy is OK in the accounts. Some keywords are misplaced. As an example, “used bowling balls” ended up in the “Competitors” campaign and should be moved, but overall it’s fine. Google’s Quality Score indicator shows either Good or Great for most of the keywords; Yahoo!’s rating is only 3 out 5, which is due to flawed account structure.

Yahoo!’s rating could generally be improved by repeating full root keywords in the title and description of the ad. For example, if a site sells shoes, consider “Nike shoes,” “Great Nike shoes” and “Cheap Nike shoes.” The same applies to the Google account as well.

Poor landing pages are most likely keeping conversion rates under 1 percent. Even though Cheapbowlingballs.com has all the necessary elements in place (descriptions, titles and meta tags) for maximum keyword to landing page relevancy, these are not conversion friendly:

• Two banners (“got balls?” and “everyone needs an angle”) are conflicting with the primary desired action. If people clicked on the site’s ad to buy a Brunswick Fury bowling ball, the landing page should reinforce that action instead of directing visitors elsewhere.

• There are no calls-to-action on the page.

• The “Add to Cart” button should be more prominent and higher up on the page. As it is, it’s buried on the bottom.

It is important to remember pay-per-click can drive targeted traffic, but it’s up to the website to convert that traffic into sales.

The Yahoo! account is missing conversion tracking. It’s also missing a uniform display URL (whereby an advertiser can set a single, overall display URL for all of its Yahoo! ads) and negative keywords (even though advanced match is turned on).

The content network is turned on in search network campaigns, which presents a problem of different traffic quality for the same pay-per-click price. Content network should be a separate campaign with different ad copies, structure and pricing due to the fact that you’re usually reaching prospects at an earlier stage of a buying cycle.

Excluded websites are an absolute must for content network campaigns. As it is, there are zero sites excluded. To exclude websites from a content network, Cheapbowlingballs.com should review the report at Google that lists all of its content-network websites, and then exclude those that generate traffic (and, thus pay-per-click expense) with little or no conversions.

Ad copies should be tested and revised based on the results. Remove underperforming ads based on conversion rates and click-through rates (CTRs). As a note, CTRs for content versus search should be treated differently. Just having ads in circulation is not enough; an advertiser needs to act on the data results.