Many online marketers have debated the pros and cons of Google AdWords Enhanced Campaigns over the last year, but one feature has proven its worth: bid modifiers. Bid modifiers act as a percentage of bid amount at the device, location, and ad scheduling levels. For example, say your maximum keyword bid is $1 and the ads are set to only show on computers. If you want to pay, at most, $0.50 for your ads to show on mobile devices, then you would set a bid modifier of -50%.

Bid modifying is a powerful feature that greatly helps cut ineffective spending and bolsters already-high-performing keywords. Setting up these bid modifiers is easy. But it’s imperative to accurately review the data before making any updates. Let’s look at the three areas where we can set modifiers. Note that bid modifiers are available in Google AdWords and Bing Ads, but for the purpose of this post I will address just AdWords.

By viewing the “Geographic” report within the “Dimensions” tab, you can see all the metrics related to specific regions. You can go as far as viewing specific cities and towns or opt to view states for a high-level perspective.

In the example below, I’m working with a campaign where my target cost per conversion is $17. I’ve set a filter to identify all U.S. states that have a cost per conversion greater than $20 and have seen at least 40 clicks over the last three months. You can see that seven states meet these criteria.

Thus, I want to set negative bid modifiers for these seven states. By going into the “Settings” tab and clicking “Locations,” I can add these states and set my modifiers. For the states with cost per conversions over $22, I set the modifier at -40% and for states under $22 at -30%. 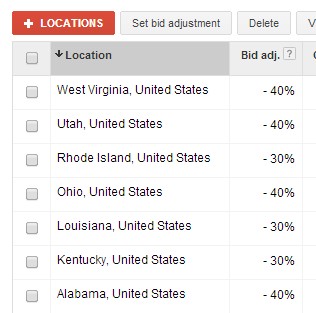 You may have to test a few different modifiers to find the sweet spot, but ultimately you are paying less in states that aren’t performing as well. Conversely, you can increase bids in states with good performance. I ran a filter where cost per conversion was less than $10 and clicks were at 40 or more. I found four states meeting these requirements. To continue getting maximum exposure in these states, I may decide to set a bid modifier of +150%, meaning a $1 bid will become $1.50.

By going back to the “Dimensions” tab you can segment your data by time. Similar to the geographic report, you can be as specific as you like. 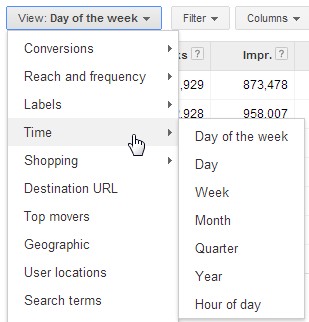 Generally, the first report I view is by hour of day and I sort from midnight on.

In this example, my cost per conversion is generally higher from midnight through 5 a.m. Additionally, I’m receiving a lot of clicks and impressions that would be valuable later in the day. I go back to the “Settings” tab and click “Ad schedule.”

After choosing the two time periods of midnight to 5 a.m. and 5 a.m. through midnight, I set the bid modifiers to -50% for the appropriate period (again, you may have to test to find your sweet spot). 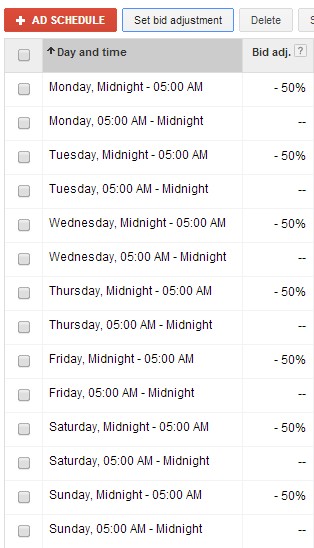 If you want to get extremely granular, you can set up to six bid modifiers per day. I suggest going this detailed if you have enough data to warrant the adjustments.

The final bid modifier that can be adjusted is by device. By device I mean only mobile as Google considers desktops and tablets the same. (Bing Ads does allow for different modifiers on all three — desktop, tablet, smartphone — platforms.) Unless specified, your mobile keywords will have the same bids as your desktop terms. In most cases, I recommend beginning new campaigns with a -20% modifier as mobile generally converts at a lower rate.

Once you have gathered data you can segment by device.

In this example, I set my mobile bid modifier at -50%. Returning to the “Settings” tab and clicking “Devices,” I set my adjustment.

Mobile bid modifiers can be set at the campaign and ad group levels, but, unfortunately, not at the keyword.

Bid modifiers have helped to ease the Enhanced Campaigns transition. They still aren’t as precise as creating individual campaigns by device or location, but they do allow for more streamlined management.