In May, Google began offering flexible pay-per-click bidding strategies, which allow advertisers to automate bids based upon different goals. For example, advertisers can now target a specific cost per acquisition or maximize clicks within a cost-per-click bid limit and budget.

Over the past month, my team and I have been experimenting with the target cost-per-acquisition (CPA) bidding strategy. This strategy sets your bids adjustment in real time, while taking into consideration device, location, and more. Using both historical and predictive data, Google will adjust your bids to reach your target CPA. To use this strategy, individual campaigns or ad groups must have received at least 15 conversions in the last 30 days. The Bid Strategies section can be found within the Shared Library of the AdWords interface.

Naturally, we we’re a bit skeptical about letting Google automate our bidding strategy. As a test, we set up the target CPA bidding strategy in 3 individual campaigns within a client’s account. Each campaign had a varying number of clicks; however, all met the conversion threshold. The target CPAs we set were in line with the last 38 days worth of data. For example, in Campaign A the CPA over the last 38 days was $13.28 and we set a target of $12.

Campaign C was the only campaign where we set a higher target CPA that was at least $1 higher than the previous 38 days.

Here are the results of our tests. 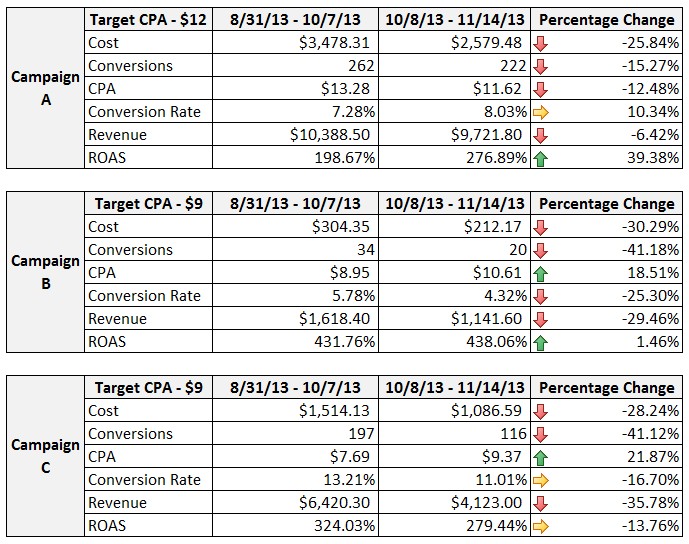 Target CPA results. Within all three campaigns, conversions dropped by at least 15 percent, and in Campaigns B and C by 41 percent.

Additionally, as the target CPA went so did the campaign costs. In all 3 campaigns cost decreased by at least 25 percent. In an attempt to hit the target CPAs, Google allowed cost, clicks, and impressions all to decrease significantly.

Target CPAs Were In the Ballpark

The key takeaway is that Campaign A had much more data to work with to go below the target CPA. Campaign A saw 2,763 clicks during our initial 38-day time period, while Campaign B had 463 clicks and campaign C had 1,054 clicks. Since Campaign A saw so many more clicks, Google was better able to utilize the data not only to decrease CPA, but also lower costs significantly.

Even though revenue decreased in all three accounts, in line with the conversion drop, return on ad spend (ROAS) actually increased in two of the accounts. In fact, ROAS increased by almost 40 percent in Campaign A, where we have already noted much more volume. Additionally, we saw average order value increase in all campaigns.

For advertisers looking to keep ROAS and average order value at certain thresholds, target CPA bidding may be a good option.

The positive outcomes from this test show that we were within the range of our target CPAs and two of the campaigns showed a higher ROAS. The negatives show us that we saw sizable decreases in conversions and revenue. Profitability-wise, we made good strides, but we cut out a lot of traffic that potentially could have converted.

Moving forward, we will set higher target CPAs so we don’t limit our traffic. For example, in Campaign A we might set the target CPA at $14 or $15. Even though we did actually hit the $12 target CPA, we also lost much traffic. There has to be a balance between the target CPA and the amount of traffic coming in.

We will learn from this test and continue to use the target CPA flexible bidding strategy. It did produce generally good results and is definitely a strategy worth pursuing and refining.