Google AdWords Enhanced Campaigns have been mandatory for all advertisers since July 23. But they have been in use since the end of February. During this time, my team and I have developed five tactics we implement in all campaigns. These tactics not only optimize campaign performance, but they also help with management.

Previously we would write at least two ads per ad group in every campaign, whether we were targeting desktops, tablets, or smartphones. We wrote at least two ads to test which messaging performed best. That same principle still applies in Enhanced Campaigns, where you can target all devices simultaneously. Every ad group should have at least four ads: two targeting desktops (including tablets) and two optimized for mobile devices. Mobile ads need to be written differently, leading into the second point.

Be More to the Point with Mobile

Mobile ads need to be more concise in terms of messaging and call to action. In many cases, mobile users are looking for a better price online when they are shopping in a physical store — i.e., showrooming. It’s imperative to give these users a short, but powerful message. Take, for example, a search for “Tom Brady jersey.” One ad speaks to price while the other emphasizes free shipping.

Pay-per-click fundamentals are no different when targeting mobile devices — using targeted keywords, testing different messaging —  but the ads should be written for users on the go. In other words, make it as simple as possible for users to take the desired action.

Importantly, you must check the “Mobile” radio box to set the device preference for mobile-specific ads. If you do not, your mobile ad will show on desktops and tablets, where your ad messaging may be different. 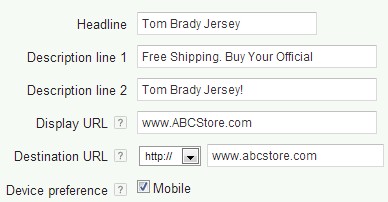 Since all devices are now targeted under one campaign shell, you no longer have the ability to create separate mobile campaigns and bid at the keyword level. Mobile keyword bids are now set as a percentage of desktop bids at the campaign or ad group level. For example, if you are bidding $1 for a keyword on desktops and you set a “-20%” bid modifier, that bid now becomes $0.80 on mobile devices.

It is imperative to constantly monitor mobile performance and adjust modifiers to be in line with your cost-per-conversion and revenue goals. At the campaign and ad group level, you can view data associated with each device. Within the interface, you will see the “Segment” button. Click here and then choose the “Device” option from the drop-down menu. 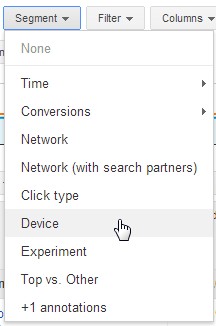 Target Granular Locations Instead of Countries

One of the main benefits of Enhanced Campaigns is the ability to set bid modifiers per location, similar to the mobile bid adjustments. Whether setting state or city-specific modifiers, you can bid differently per location. For example, perhaps you see a low cost-per-conversion in the states of Wisconsin and Missouri. You can set a bid modifier of “+30%.” Thus, if the normal bid in the 48 other states is $1, your bid in Wisconsin and Missouri becomes $1.30. Conversely, you can set negative bid modifiers in locations that aren’t performing well.

An important caveat to geographic modifiers is that you must enter each location. If you just target the United States, Google does not provide the ability to set modifiers at the state level. Aside from entering locations manually, you can also bulk upload in AdWords Editor.

Ad extensions provide extra real estate to your ads, thus helping to improve click-thru-rate. Not including extensions in beta phase, Google offers nine extensions to advertisers. The two that tend to have the most impact and should be used in the majority of campaigns are sitelinks and call extensions.

Sitelinks, previously only available at the campaign level, can now be run at the ad group level, allowing more specific destination URLs. Creating ad group-level sitelinks can be time-intensive. It’s best to start with the top three-to-five most-trafficked ad groups. Additionally, make sure you are writing sitelinks for desktops and mobile. Your mobile sitelinks should be concise for the same reasons mobile ads are.

If phone calls are important to your business, use call extensions. On desktops, you can choose to show your phone number or a dynamically generated number within the vicinity of your ad. If you use a dynamic number, you can set calls lasting longer than a specified amount of time as conversions. One note of importance is that you can no longer put your phone number directly into your ad; Google will disapprove. If you want to show a number, you must use the call extension.

Call extensions also show on mobile devices where users can tap a “Call” button to phone your business directly. However, I’ve found that when using this extension, your text will sometimes get truncated.

In general, we write all mobile ads to be sixty characters or less to avoid truncation.

Enhanced Campaigns have changed the landscape for creating well-structured campaigns in a multi-device world. The five tactics in this article  help optimize Enhanced Campaign features while still allowing for optimal campaign management.