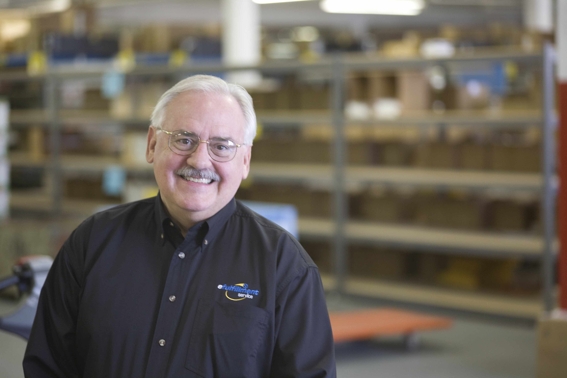 John Lindberg, president of eFulfillment Service, is no stranger to change.

In 1969, Lindberg founded LPI Corporation in western Michigan, specializing in powder coating of metals used in cars and office equipment. He sold this company to investors in 1989.

He retired. For six months.

“It was the longest six months of my life,” Lindberg said.

In 1990, Lindberg founded a book distribution company, Publishers Distribution Service, which he ran with a business partner until 1995 when he sold it to a group of investors, who renamed it Access Publishers Network. The parent company then went bankrupt in 2000, which ended Lindberg’s employment contract with Access.

“At that point, it’s wasn’t about being retired, I had to reinvent myself,” Lindberg said.

His home state of Michigan was in the process of reinventing itself as well. Outsourcing of manufacturing to offshore suppliers escalated during the early 2000s. A 2004 report by the University of Michigan states Michigan lost about 163,000 manufacturing jobs from 2000 to 2003.

According to the Bureau of Labor Statistics, the upward march of Michigan’s unemployment rate began in 2000, and it still marches on (15.2 percent in August 2009). As plants closed and the job market shriveled, Lindberg began his reinvention with a few essentials—a little know-how, some savings and a big, empty warehouse.

During his experience as a book distributor, Lindberg worked with hundreds of small publishers and learned about their frustrations with the then existing practices in shipping and order fulfillment. He began developing a business plan in 2000 for what is now eFulfillment Service, Inc.

“I began my market research by putting myself in the place of a small business owner wanting to outsource fulfillment and I contacted a long list of fulfillment companies by phone and mail,” Lindberg said. “I quickly learned how expensive and frustrating fulfillment outsourcing could be for smaller and start up online merchants at that time.”

He said his survey encountered large set up fees, high monthly minimums and lots of “tricky terms” and hidden fees.

“This just cannot work for smaller merchants who don’t have the sales volume necessary to support such high overhead expense,” Lindberg said.

Lindberg founded eFulfillment Service in January 2001, hoping to address an unmet need in the order fulfillment marketplace for a firm which could better serve online “mom and pop” web stores.

“I realized that the vast majority of online merchants want to outsource their order fulfillment”, Lindberg said. The problem was making the service affordable and the solution was to create a business model based on consolidation of hundreds of smaller accounts serviced by a high tech package processing center.

The key to Lindberg’s business survival and profitability was adding new fulfillment clients at a rapid pace. In 2001 most of today’s marketing tools were not available, so Lindberg began with a traditional direct mail campaign targeting small publishers and start up web store owners. Later on, he was able to reduce his marketing costs by use of pay-per-click advertising and search engine optimization.

Lindberg said at first, potential clients would call and he would explain his business to them over the phone. “I spent day after day having pretty much the same conversation with our sales prospects,” Lindberg said. “We had a very nice warehouse and fulfillment process all set up and ready to go, but it was 100 percent empty when we started.”

His marketing efforts eventually paid off. eFulfillment Service expanded beyond Lindberg’s original warehouse to another 95,000 square foot location in Traverse City, Mich. The company now manages more than 40,000 SKUs with 1.3 million individual items for about 400 clients. These clients are located in virtually every U.S. state, as well as many different countries. It fulfills 10,000 to 15,000 orders per week, representing some 30,000 separate items. Forty-five employees now work for the firm.

“As a company, we’re always trying to look ahead,” Lindberg said. “We do fulfillment for foreign merchants, and we’re grateful for those clients.”

Much of this has to do with the dollar’s value relative to foreign currency, Lindberg said. He said during a period when the Canadian dollar value topped the American dollar, Canadian clients were interested in saving by shipping through a fulfillment company based in the U.S. He also said this could also be beneficial to U.S. merchants looking to sell in foreign markets.

Listen to John Lindberg discuss his background and the opportunities an economic downturn presents.

“If and when the American dollar falls, we are trying to be ready to offer huge cost savings to U.S. clients shipping abroad. “We think it’s coming.”

One of the major challenges of the shipping industry, Lindberg said, is the increasing unprofitability of the U.S. Postal Service. An Aug. 5 news release by the USPS stated the service closed the second quarter 2009 with $2.4 billion in losses.

He advises merchants to pay close attention to hidden shipping fees and surcharges connected with weight and volume.

“If you’re not careful, if you get some of these things wrong, it can really hurt you,” Lindberg said. “If you get it right, you’re a much better position to be competitive.”