Ecommerce merchants want consumers to take action. That’s what marketing is all about: reaching potential customers and convincing them to take action, more specifically, to make a purchase. Dr. BJ Fogg is a professor at Stanford University who studies ways in which technology can be used to change behaviors in positive ways–to take action. He’s also the creator of the Fogg Behavior Model. He talked with Practical eCommerce contributing editor Kevin Patrick Allen for this “Quick Query.”

Practical eCommerce: What is the Fogg Behavior Model?

Dr. BJ Fogg: “I created a behavior model that helps people understand what causes behavior change. I was motivated to do that because there’s a lot of psychology and behavior change thinking out there that’s either too complicated or incorrect. Earlier, I’d worked with some of these models and theories and they just really didn’t work that well so I thought I need to rethink this and make it more accurate and simpler.”

PeC: How can ecommerce merchants use your behavior model to better reach their audience and perhaps increase sales?

Fogg: “The behavior model has three parts and to be able to achieve an ecommerce goal, you need to be able to account for all three parts. Number one, your user or your customer needs to be motivated or have some level of motivation. Number two, they need to be able to do what you’re asking them to do. And number three, you need to trigger the behavior you want them to. So, as you look at the experience and the behavior you want from the customer or the user, you have to think through those three elements. You think about it actually in the reverse order. Are we triggering the behavior? Are they able to do what we’re asking to do? Then if both of those are yeses, then are they motivated to do it? So, it’s a simple and accurate way to think about behavior change. If one of those pieces is missing, the team can focus on it and fix that piece.”

PeC: Let’s break it down into a real life example. Let’s say that I have an ecommerce store and I specialize in blenders and maybe I have a video on the front of the site where it shows these are the different features of the blenders. How could that video be better using the Fogg Behavior Model?

Fogg: “Understanding where your customer is coming from is the first step. If you understand where your customers are coming from then you understand what elements that video needs to hit. If they need to be motivated to buy the blender, then the video should focus on the motivational aspect: how it makes their life easier, how it makes them healthier and so on. If they are already motivated, then the video shouldn’t be around motivation. It should be around ability, making it simpler to buy the blender. So, it might be more of an explanation, ‘Here’s what you do to buy the blender and here’s what the process is.’ So, some videos are about motivation and some videos are about explaining the processes on making the behavior you want simpler to do.”

PeC: You talk about motivation and that some audiences are already motivated and some are not. Can you give us an example?

Fogg: “Let’s say you’re running a site that’s about weight loss. Anybody coming to that site came there because they already have some motivation built in. You can almost count on that. Our culture already has tons of motivational messages around maintaining weight. So, at that point, it’s about facilitating, making it easier and triggering the behaviors you want, whereas, let’s say somebody is on Facebook and somebody says, ‘Hey, here’s this great new camera.’ That person may not be motivated at all, first of all, to click on the link to the camera or even buy the camera. So, somehow you have to figure out what’s the message so people will click on this link to our page and once they’re on the page, what gets them to watch the video. The video is about saying, ‘Here’s this great camera. Capture memories of the holidays.’ Basically, the message in the video is more motivational rather than instructional.” 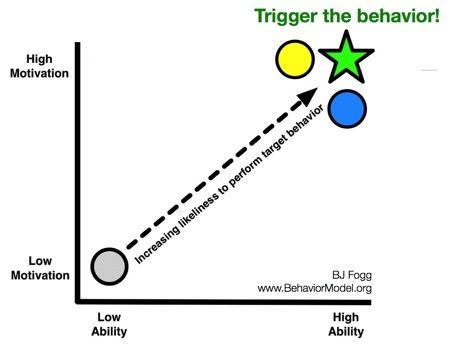 PeC: With Twitter and Facebook you have tools to reach consumers. What are some good triggers and what are some triggers that are not so effective?

Fogg: “I’ve kind of boiled it all down to nine words. This is my mantra: Put hot triggers in the path of motivated people. A hot trigger is something that you can take action on. ‘Click this link, click this button, enter your information here.’ The hotness means they can do it right now as opposed to a cold trigger, [such as] I’m driving along and the radio says, ‘Donate.’ Well, I can’t donate right now. That’s a trigger, but it’s cold.

“Now, the next part of that phrase is, ‘in the path of motivated people.’ What you have to do is figure out what is the path of my potential customers? Their email inbox is probably one path. A Facebook feed might be one path. A Twitter stream might be a path. You’ve got to think through what is the existing path of my audience and how do I put a hot trigger in that path.”

Fogg: “Just put things out there, see if they work and if they don’t, try something else. Nobody can predict 100 percent of the time what’s going to work. You have to be pretty nimble and try lots of stuff. Measure what works and what’s working, grow that, and what’s not working, stop and try something else.”