Joseph Monks is a Miami, Fla.-based filmmaker and freelance writer. His new horror film, “The Bunker,” is soon to be released and details of it and his other films projects can be found at Sightunseenpictures.com. Monks is also blind, and we asked him about blindness, the Internet, ecommerce and his new film. 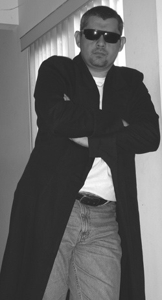 PeC: Joe, you are an inspiration to anyone who knows you, and we thank you for your time. We’ve corresponded with you via email, but we’re curious, how does a blind person use email?

MONKS: I use screenreader software, which enables the blind to participate online. The program reads whatever appears on the screen. It enables me to write, edit and read email.

MONKS: The screenreader reads out the links, text and navigation for me. When I view a site, I can use it almost the same as anybody with sight, though I use keystrokes instead of a mouse. When graphics are employed, if the site is coded well, with ALT tags, etc., my screenreader will read out the description of the image file, which enables me to move around a site just like a sighted visitor.

PeC: Our readers are ecommerce business owners and those interested in ecommerce. What advice would you offer these folks to make certain their sites are accessible for the blind?

MONKS: Today’s e-tailer needs to recognize that soon there will be more than 75 million blind people worldwide, and we want to buy things online, too. They should be judicious in their use of Flash and make sure to code their Flash so that all buttons are recognized by screenreader software. Using ALT tags is a must for all graphics and images. Never use the default file names for product images. If I want to click on a product description, if my screenreader reads: dsc1412.jpg, that isn’t very helpful. Making sure a site is accessible to the blind consumer should be no tougher than making sure sites work in Internet Explorer, Netscape Navigator or Safari.

PeC: Do you buy products online?

MONKS: Yes. As long as a site functions well enough for me to surf it without a hassle, I will buy there, and more importantly, return, since I know it’s accessible.

PeC: You’ve recently directed a movie. Could you tell us about it?

MONKS: The movie’s called The Bunker, and looks to be the first feature directed by a blind filmmaker. It’s the story of a teenage runaway who leaves home and is kidnapped the night her congressman father announces his bid for reelection. The kidnapper is a serial killer with a devastating secret. It’s part horror film, part psychological thriller. Hopefully, in 2008, you might be seeing it at Blockbuster, or able to rent it at NetFlix.