Remarketing is way for merchants to advertise to consumers that have visited the merchants’ stores previously. When a consumer visits a site and a merchant is running one of the available remarketing tools, the merchant can subsequently advertise to that consumer. This advertising is currently in one of two facets: banner ads and email. Both are quite different, so let’s begin with remarketing banner ads.

In general, banner ads can be very effective in reaching a potential customer that may have started shopping at a store or, even more passively, just stopped by the site to take a look and then left the site for some unknown reason. Before remarketing, there was not a practical way to reach out to that potential customer immediately after they left, but now with remarketing this is possible.

Say a merchant runs an ecommerce clothing shop and a potential customer views a pair of pants and a sweater, but then leaves the store without purchasing anything. With remarketing, the merchant’s site will have placed a “cookie” (a short line of text) in the consumer’s browser, which allows the merchant to follow the consumer and display targeted banner ads on participating sites that the consumer visits. The merchant can then advertise those pants, sweaters or other similar items to the consumer, who is at least familiar with them. Google is launching the most widespread network, called Google’s Display Network (GDN), for remarketing and it’s worth taking a closer look at it. 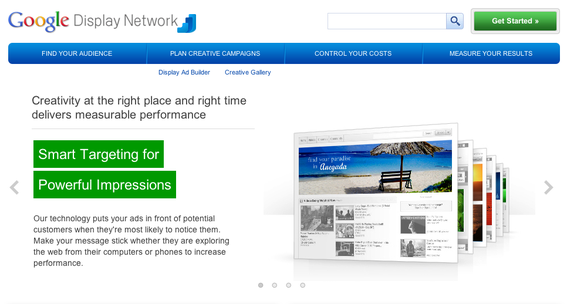 If a merchant uses the GDN remarketing platform and also uses Google’s AdWords, he or she can reconnect with consumers that previously visited their store long after they’ve left. As their lost customer browses through the already 2 million-plus websites within the Google Display Network – the merchant can know that targeted banner ads are being displayed on those GDN sites to urge the customer to come back to the store.

Google does this by allowing merchant’s to generate remarketing tags from within their already existing AdWords account. The merchant then can place those tags on pages with the highest traffic on the site like the “Homepage,” as well as the “Checkout” and “Shopping Cart” pages. AdWords then creates anonymous lists of users viewing the tagged pages so the merchant can serve those lost shoppers with specifically tailored ads as they browse other sites in the GDN.

Merchants can even build custom lists from the AdWords lists for various types of shoppers. For example, we know merchants can place targeted custom ads about merchandise that the lost shopper viewed, but they can also create custom ads for shoppers that abandoned their carts suggesting they were interested and close to buying, but something drove them away at the last minute. Merchants can target those shoppers with a coupon ad offering 20 to 30 percent off, for example, on the exact goods that the shopper was just about to buy to entice them back to the site.

And since Google allows for text and display style ads in their network, smaller merchants could create hundreds of different, custom tailored ads for the specific shopper and for their specific page (or pages) that they viewed on the site.

Cynthia Benin, with the Google Display Network team, spoke with Practical eCommerce about Google’s remarketing tools. She said, “Remarketing allows an SMB [small to mid-sized business] to focus marketing efforts on the most qualified and relevant customers: those that have already visited your site. In addition, it works really well in conjunction with search campaigns. You can drive customers to your site through your search ads, and then if the customers don’t buy anything – you can reach those customers with a targeted message to encourage them to come back and make a purchase.”

Clearly, remarketing is a tool that is best utilized as part of a multi-pronged advertising campaign and the larger the network of sites that use the service the better the results. It can be effective in bringing back lost, yet interested, customers and try to regain their excitement for the merchant’s product.

With the rise of remarketimg services, there has been a lot of talk of privacy from consumer advocacy groups. The critical point to understand when considering the use of this new technology is that no personally identifiable information is held from the store visitors that leave. All that is tracked is the simple fact that a person visited your site.

It’s not a whole lot different than Facebook’s targeted ads based on user profiles or Gmail’s targeted text ads based on the content of an email. There’s no storage of that information, it’s used purely to generate an ad. But, just the presence of the ad on the next website that the consumer visits is a bit of a broadcast of his or her activity, which could be embarrassing in some public or workplace environments and may frustrate some consumers.

It’s not as passive as traditional advertising and there will undoubtedly be consumers that feel it is overly aggressive. SMBs will have to consider the individual demographics and tastes of their shoppers to know what is best for their site; it may not be for everyone.

Google has just launched its remarketing program and there is no definitive proof that using targeted banner ad remarketing will necessarily increase conversions. However, a study by Advertise.com found that remarketing increases ad response by a whopping 400 percent.

Regardless of whatever the conversion rate statistics wind up being, remarketing must be considered by each SMB on an individual basis because, at its core, remarketing is about increasing traffic to a site, and not necessarily whether that traffic translates into paying customers.

None of this is free, of course. But Google offers a wide-array of pricing options for standard ad styles (cost per click, cost per impression, and cost per acquisition) that should suit most SMB needs.