Right on schedule, this week Google began rolling out its intrusive mobile popup penalty, aimed at reducing the number of results that take mobile searchers to pages that use large popups or interstitials over the content they expected to find.

Google’s goal is to preserve the user experience of its searchers. When searchers click on a search result, they expect to be taken to a page where they can see the content that fulfills their search. Interstitials (pages displayed before the expected page) and popups that cover the expected content detract from that experience, according to Google, resulting in a frustrating experience. Since most of Google searches are from mobile devices, Google is taking its mobile search experience seriously.

What kind of mobile interstitials and popups are likely to cause penalty issues? Google lists specific cases in its Webmaster Central Blog. 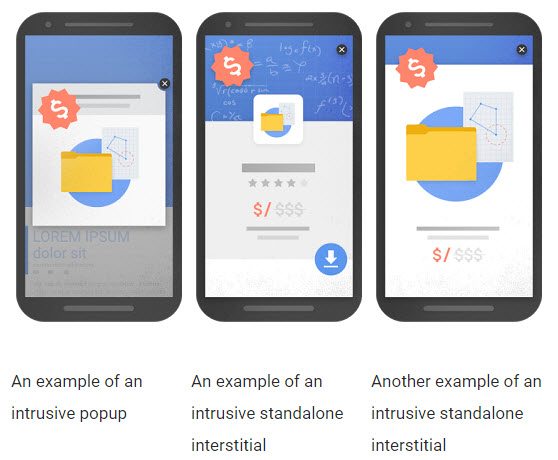 According to Google, these are “examples of mobile interstitials that make content less accessible.” Source: Google Webmaster Central Blog.

Not all interstitials and popups are taboo, though, and some are required by law. Google makes exceptions for those. The Webmaster Central Blog also lists examples of interstitials that are acceptable, and will not affect mobile rankings. 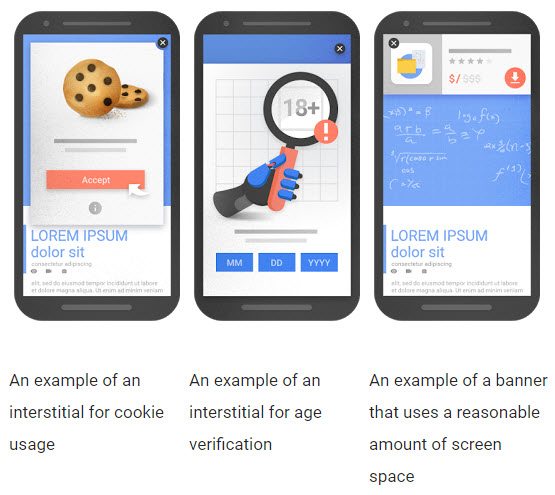 Google states that these are “examples of interstitials that would not be affected by the new signal, if used responsibly.” Source: Google Webmaster Central Blog.

The penalty will only be applied on pages that use interstitials and popups on their mobile experience. Desktop pages, so far, are not impacted by an interstitial penalty.

In addition, the penalty only applies to interstitials shown at the entry page. If a searcher chooses to visit your site from Google’s search results and clicks through to your site, that first page viewed is the entry page. That entry page should meet the guidelines for Google’s intrusive mobile interstitial penalty.

However, you could choose to employ an interstitial or popup later in that shopper’s click path with no concern about this penalty. If you’re going to go this route, though, remember that every page on the site is potentially an entry page for natural search. So tie the interstitial to the number of clicks rather than a specific type of page on your site.

Starting today, pages where content is not easily accessible to a user on the transition from the mobile search results may not rank as high. As we said, this new signal is just one of hundreds of signals that are used in ranking and the intent of the search query is still a very strong signal, so a page may still rank highly if it has great, relevant content.

That is a moderately weak announcement compared to other penalty warnings. The references to “may not rank as high” and “one of hundreds of signals” temper the dreaded “penalty” word. However, before you get too comfortable about ignoring the warning, keep in mind the end of the statement: “…if it has great, relevant content.”

In Googlespeak, this is a way that it can continue ranking the sites that are already giants in the rankings due to content, brand, or authority dominance with impunity. Don’t expect the same treatment unless you’re one of the consistently top-ranking sites, and even then tread carefully.

It’s only worth the risk if you’re willing to pay the price in decreased mobile search traffic from Google. If you’d lose sleep if the traffic disappeared, then you should take steps to safeguard that traffic before it’s lost. Or, at least have a quick-to-implement plan you can turn on when the risk becomes a reality.