Bing Ads released more information this week on its study of the additive effect of paid search ads and organic search performance. According to Bing, one plus one really does equal three.

The research Bing Ads conducted in December 2014 analyzed 3 million desktop impressions on results pages to determine the impact ad placement has on organic search performance, specifically for brand terms. This week, Bing released its findings in a Slideshare presentation.

While Bing Ad’s goal is presumably to sell advertising, the study sheds additional light on a couple of age old questions: Should companies bid on brand terms and does paid search cannibalize organic search traffic? It’s important to note that this study does not suggest that the purchase of ads affects your site’s organic ranking.

This sounds like common sense, since the simple math of organic search clicks plus paid search clicks is more than the clicks from just one or the other. But Bing Ad’s findings indicate that incremental clicks were won based on the presence of both organic and paid search listings. 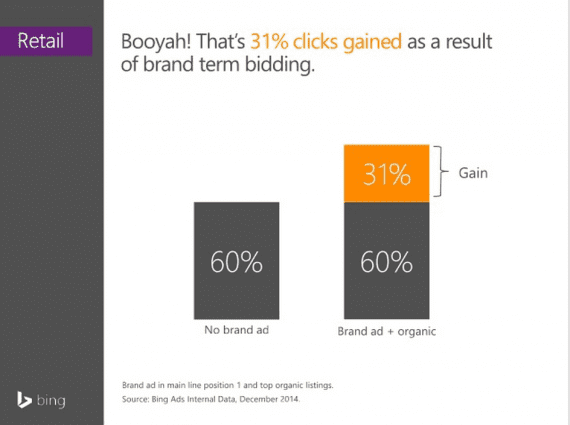 According to Bing Ads, retailers with organic search rankings in the top position received 60 percent of the clicks from that search result — as shown above. So 60 out of 100 people clicked on the brand’s organic search result. However, when the retailer also had a branded ad in the top ad position, the number of people who clicked on a brand ad or organic result for that retailer skyrocketed to 91 percent.

That’s a mere 9 percent of clicks to competitors instead of 40 percent of the clicks without the brand ad.

I’ve often talked about the benefit of search result page domination, whether it’s organic rankings, Knowledge Graph, local search, or other element. Ecommerce sites should expand their footprint to include as much of the search result page as possible. Bing’s study shows that using Bing Ads for branded phrases can contribute to that cause.

To some degree, pay-per-click ads cannibalize organic search listings, according to the study. But Bing Ad’s research showed that with both top organic and paid listings, 49 percent of the clicks went to organic listings and 42 percent to the paid ads. That means that 11 percent of the clicks that would have gone to an organic listing went instead to an ad, as shown below. 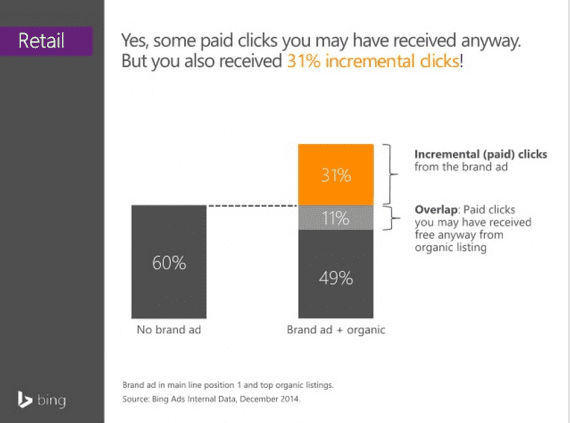 Eleven percent cannibalization may seem like a lot, knowing that those clicks could have been free if no paid ad had run in the top spot. But weigh that against the 40 percent of clicks that go to other sites when you don’t bid on your brand with an ad.

Consider this a defensive strategy to keep competitors from encroaching on your territory. How many hundreds of domains do brands register to keep others from squatting on them? This is similarly defensive, except that it also drives customers to your site.

Those who search for your brand are likely interested or loyal enough to type it directly into the search bar. Do you really want 40 percent of them to go somewhere else? True, some of the 40 percent could be going to your branded Facebook or other social page, but they could also be distracted by your competitors or negative press about your brand. Consider this another form of reputation management.

To be sure, all studies that come from an entity with something to gain from the results — such as this study from Bing — need to be viewed with caution.

If you can’t rank in the top spot organically, the value of bidding for the top paid ad spot changes. The best thing you can do for your business is test the concept yourself and determine how it performs for your brand.