XML sitemaps serve a very niche purpose in search engine optimization: facilitating indexation. Posting an XML sitemap is kind of like rolling out the red carpet for search engines and giving them a roadmap of the preferred routes through the site. It’s the site owner’s chance to tell crawlers, “I’d really appreciate it if you’d focus on these URLs in particular.” Whether the engines accept those recommendations of which URLs to crawl depends on the signals the site is sending.

What Are XML Sitemaps?

Simply put, an XML sitemap is a bit of Extensible Markup Language (XML), a standard machine-readable format consumable by search engines and other data-munching programs like feed readers. XML sitemaps convey information about one thing: the URLs that make up a site. Each XML sitemap file follows the same basic form. A one-page site located at www.example.com would have the following XML sitemap: 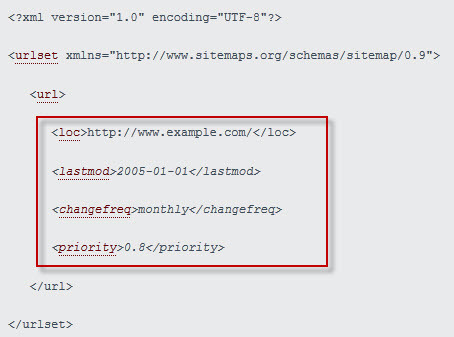 The XML version and urlset are the same for every XML sitemap file. For each URL listed, a <url> and <loc> tag are required, with optional <lastmod>, <changefreq> and <priority> tags. The URL information, outlined in red above, indicates the information that changes for each URL. The <loc> tag simply contains the absolute URL or locator for a page. <Lastmod> specifies the file’s last modification date. <Changefreq> indicates the frequency with which a file is changed. <Priority> indicates the file’s importance within the site. Avoid the temptation to set every URL to daily frequency and maximum priority. No multi-page site is structured and maintained this way, so search engines will be more inclined to ignore the whole XML sitemap if the frequency and priority tags do not reflect reality. 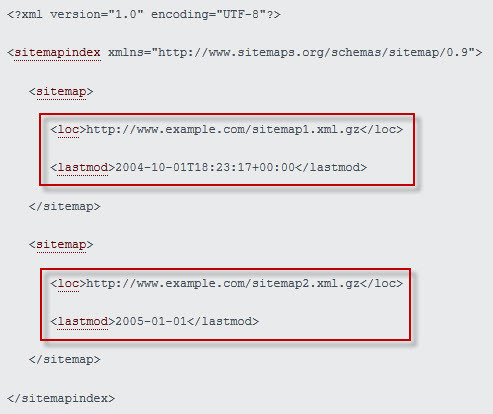 How to Create XML Sitemaps

In the simplest cases, small sites can easily create and post their own XML sitemaps manually using the examples above as formatting guides. For example, a very small ecommerce site might consistently offer the same five products for six months. The URLs for the site don’t change even though they may update content on the site every month or so to keep it feeling a bit fresh. This five-product site could easily create a text file in notepad with the format of an XML sitemap, and save that file as sitemap.xml. All that remains is to post the sitemap.xml to the root of the site, and the XML sitemap is live. In six months when the products change, they would simply update the sitemap.xml file and repost it to the root.

For larger sites and sites that change more frequently, plugins or modules available for many ecommerce platforms can automate the creation and posting of XML sitemaps. Sites built on Drupal or WordPress can use all-in-one XML sitemap plugins like Drupal’s XML Sitemap Module or Better WordPress Google XML Sitemaps to generate and post their files on a regularly scheduled basis. If a site’s platform doesn’t include support for automating XML sitemaps, freeware programs like gSite Crawler can automate the creation and posting of XML sitemaps via FTP. Look for an XML sitemap program that obeys robots exclusion protocols like robots.txt disallows and meta robots noindex tags to ensure that excluded files do not end up in the XML sitemap.

XML sitemaps require promotion. Fortunately, their intended audience is so small that a couple of quick steps is all it takes. First, make the XML sitemap autodiscoverable by adding the following line anywhere in the site’s robots.txt file: Sitemap: http://www.example.com/sitemap-index.xml

When reputable crawlers visit a site they make the robots.txt their first stop to identify which files should be crawled and which should be avoided. In the process the crawler identifies the XML sitemap from the autodiscovery line and makes that XML file its second stop. From there it proceeds with the rest of its crawl, armed with the site’s recommended files.

Because they’re a little obscure, XML sitemaps have collected an interesting set of mythical powers and superstitions. These are some of my favorite questions and objections regarding XML sitemaps.