Search engine optimization typically focuses on popular keywords. However, long-tail SEO targets keywords that are searched for less frequently but drive value in the aggregate.

Consider the screenshot below from seoClarity, a SaaS platform. It shows the demand for keywords related to batteries, from frequently searched terms at the top to low-volume queries at the bottom. For example, “battery charger” has 110,000 monthly searches, on average, but “dw9116 dewalt battery charger” has just 90. 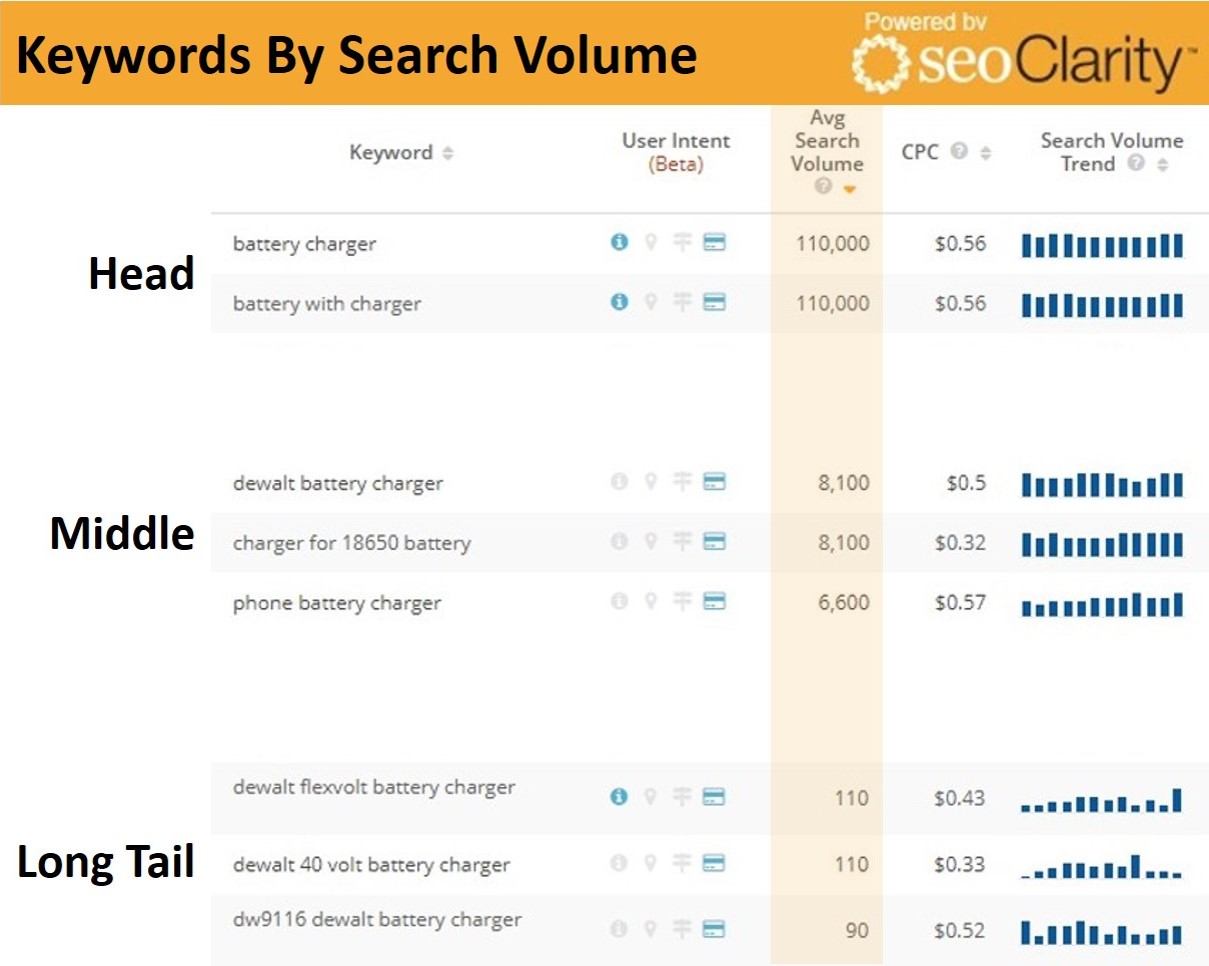 This chart from seoClarity shows the demand for keywords related to batteries, from frequently searched terms at the top to low-volume queries at the bottom. Click image to enlarge.

The number of searches for head and long-tail terms varies dramatically by the keyword set. If you sell only bands for cowboy hats, your head term could be “cowboy hat bands,” with 3,600 average monthly searches. But if you sell merchandise related to the Netflix show “Stranger Things,” your head term (“stranger things”) drives 1.5 million searches per month.

Regardless, most keyword spectrums include the long tail, those with just one or two monthly searches. Long-tail keywords are difficult to research because they don’t appear in many keyword tools. Moreover, 15 percent of the search queries on Google are new. Thus the list of long-tail keywords is continually growing.

The Value of Long Tail

Most keywords are long tail. Ahrefs, another SEO platform, found that roughly 98 percent of the keywords in its 2018 database of 1.9 billion queries received 100 or fewer monthly searches. 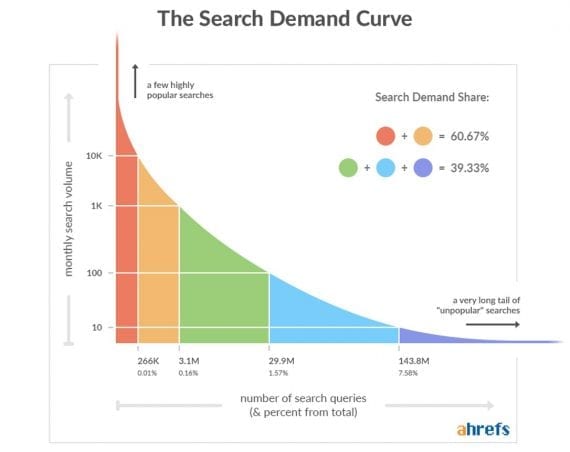 Fewer than 2 percent of keywords had more than 100 monthly searches, according to Ahrefs. Click image to enlarge.

Those individually insignificant long-tail queries can drive meaningful organic search traffic and revenue for ecommerce sites. And the further down the tail, the further down the purchase funnel, typically, as low-volume phrases are searchers’ attempts to find exactly what they want to buy. They’re not looking, say, for a type of “tablet.” They want an “ipad wifi cellular 16gb.”

Think about a product search. The phrase “dewalt battery charger” would apply to a “battery charger” category page with an applied brand facet of “dewalt.” That page would target 8,100 searchers per month, according, again, to seoClarity. That’s one phrase and one page. But thousands of keywords in the middle and long tail are combinations of categories and facets.

If your site’s architecture enables search engines to index faceted navigation pages, you are well on your way to targeting the long tail of ecommerce SEO at scale.

At that point, you could manually create optimized subcategory pages for the product sets that searchers are telling Google that they want, or you could choose a scalable approach: sitewide modifications such as template optimization, taxonomy optimization, and platform adjustments.

The good news is that scalable optimizations benefit many pages at once rather than a single page individually. The bad news is that it tends to require significant design and development time. I’ve addressed the topic in detail, at “SEO: Harnessing Facets to Drive the Meaty Torso.”