SEO and PPC: Synergistic or Cannibalistic?

Many ecommerce managers wonder whether the paid search ads they place enhance or cannibalize the organic search results. They wonder, in other words, if they end up paying for clicks they could have had for free organically. A recent study by Google suggests that the relationship between paid and organic search is more synergistic than cannibalistic.

Top organic rankings in the major search engines can be construed by consumers as endorsements of those top-ranked sites. If Google ranks a site number one it must be the best site, right? Ecommerce sites in the trenches know that’s not always the case. We’ve written about ways to increase search result visibility with rich snippets in “Capture More Search Traffic with Rich Snippets,” but there are other ways as well. Google’s latest findings on paid and organic search results suggest that paid and organic listings are mutually beneficial. 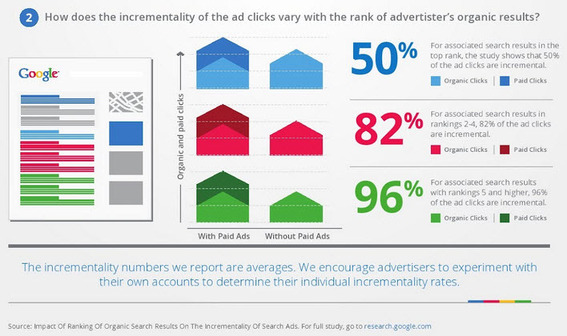 Google recently released its results in a blog post — “Impact of Organic Ranking on Ad Click Incrementality” — including the news that 50 percent of the clicks on AdWords campaigns that occur when the same site is also ranked number one organically are incremental. For example, if a hypothetical site typically received 100 organic visits from Google from a certain number one ranking and 100 paid visits from that same keyword phrase, the site would only receive 150 organic visits if the paid search ad was paused. So yes, the site ends up paying for some of the visits it could have had organically for free, but it can counterbalance that cost with the additional visits it wouldn’t have received if the paid search ads weren’t running for that keyword. The return on investment for this relationship may be positive or negative depending on the site and the keyword phrase.

Google is quick to note, as it should, that individual sites’ performance may vary. Ecommerce sites can run a variation of this test themselves by pausing ad campaigns that run for phrases that rank in position one on Google, position two through four, and positions five through 10. For example, a site that ranks number one for the phrase “hunting socks” might pause its Google AdWords ads that run for the same phrase and measure the change in organic click through from Google. When tested across multiple phrases that rank in multiple positions, an ecommerce site can determine its own relationship between paid and organic search results.