Ecommerce has been the great equalizer for retailers—a small book store in Iowa can oftentimes compete with Barnes & Noble, Borders, and Amazon for customers in New York, Los Angeles, Chicago or the world, but equality isn’t always good. There are times when it’s good to have a competitive edge (inequality), and if you act fast this could be one of those times.

MarketingSherpa, one of the Internet’s most reputable marketing sites, has offered up seven tactics for boosting online banner-ad response rates.
MarketingSherpa’s findings are based on a survey the firm conducted. These findings generally show “how seven design elements have an impact on the effectiveness of online advertising,” especially as compared to response rates for regular or commonplace online banner ads. For this article, these seven tactics are divided into three groups of suggestions. 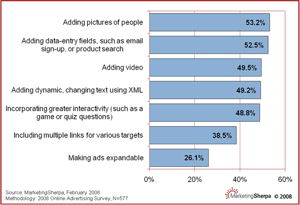 Add Pictures of People to Your Ad

“It’s no accident that some charities seeking donations feature pictures of suffering children. Words on a page simply can’t convey emotional messages, such as suffering, joy, or frustration,” MarketingSherpa said. “Our brains are hardwired to pick up volumes of information from the subtle nuances in facial expressions. That could be why adding a picture of a person is the single most effective way to communicate brand information.”

The MarketingSherpa survey found that a picture of a person is worth a 53.2-percent leap in ad response. And they aren’t alone in their findings.

In 2005, Yale University, Harvard University, Princeton University, the University of Chicago, and Dartmouth College jointly analyzed the results of a massive marketing test in South Africa wherein a bank sent 50,000 potential customers a loan offer. The loan offers included various interest rates and repayment options as well as randomly selected “psychological features”—including a subtle photograph of a person in the corner of randomly chosen offers. These psychological features had no real bearing on the loans. Not surprisingly, offers that promised lower interest rates got more takers than relatively high interest offers, but the photographs also had a strong effect on response rates in some cases more than doubling the number of customers that took the loan offer.

“As a whole, our results suggest an important role for psychology in market contexts,” the study authors said. ” At the individual level, psychological factors appear to be at least as important as price in determining demand. … For another example, male customers’ take-up increases with the inclusion of a woman’s photo in a corner of the offer letter.”

Editor’s Note: A mini-marketing experiment: Did you notice that we chose a picture of a young woman for the icon that represented this article on our article page? Do you think it had an effect on you? And did you click the headline or the picture? Submit your answers and thoughts in the comment section below.

Make Your Ad Useful And Active

MarketingSherpa’s next two tactical suggestions, adding data entry fields and adding video, fall into what the Sherpa called “Utilitarian” design categories, but somehow “Utilitarian” just doesn’t seem like the proper term for an online ad design tactic that could boost responses by 52.5 percent.

“Adding drivers, such as more data-entry fields, tends to flatten the purchase funnel,” MarketingSherpa said. “Adding a video [which drove results up 49.5 percent] allows advertisers to pack more information into an ad. Such drivers ease the journey from product ignorance to product purchase, with the least amount of work possible.”

And remember, Internet video use is growing rapidly. comScore, an Internet intelligence company, reported that Internet users watched more than 10 billion videos in December 2007. That is about 3 hours of online video a month. Furthermore, online ad king, Google, has added click-to-play video ads to its offerings.

According to MarketingSherpa, adding dynamic, xml-driven text to ads; incorporating interactivity; including multiple links; and making an ad expandable will improve responsiveness by 49.2 percent, 48.8 percent, 38.5 percent, and 26.1 percent respectively.