Editor’s Note: This is part two of “Social Commerce Spotlight,” our series on the mix of ecommerce and social media. Part one, “Payvment, a Facebook Storefront Provider,” we published previously.

With the growth of social commerce, especially on Facebook with its 500 million members, a number of shopping cart providers are creating apps for their customers’ Facebook Fan pages. Here is an initial list of three such apps. 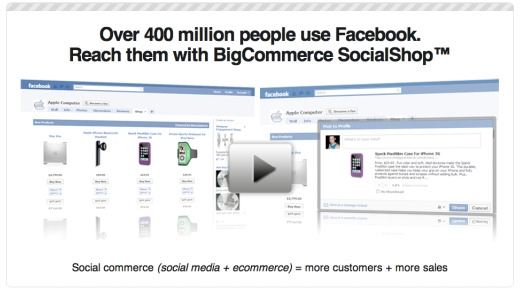 SocialShop is BigCommerce’s new Facebook application. SocialShop is not a stand-alone shopping cart that allows consumers to complete their purchases without leaving Facebook. It links back to the respective merchant’s ecommerce site.

There are a number of benefits to using the app, with increased traffic to the merchant’s site being a chief one. According to BigCommerce CEO Mitchell Harper, the 25 percent of BigCommerce customers who use the app report that it has resulted in 17 percent more traffic to their sites, on average.

SocialShop draws from the platform’s “New” and “Featured” categories. It automatically populates the app with products from those sections, which relieves the merchant from having to manually enter those items.

Connecting from the app to the ecommerce site also ensures customers that their transactions will be handled in a secure environment.

Another feature of SocialShop is that it allows customers to easily share product information with their network through the use of a Facebook Share button that is associated with each product.

SocialShop is free to every BigCommerce customer. Setup takes only a few minutes and no coding or special programming is required. Once installed, a “Shop” tab is added to merchant’s fan page menu.

Here is an example of SocialShop, as used by MaxiGrip, a tire studs company. 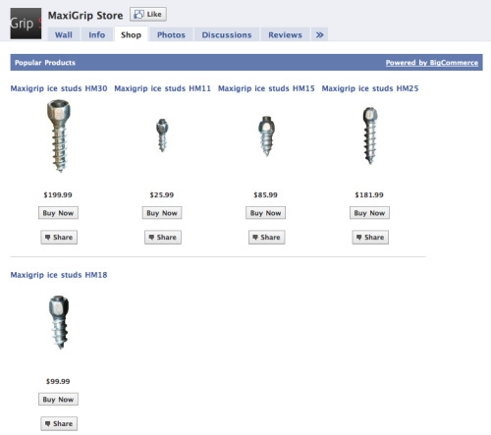 Example of a Big Commerce SocialShop store on Facebook.

Volusion’s Social Store Builder integrates with both Facebook and MySpace.

But the installation of Social Store Builder on Facebook is more arduous than the BigCommerce app and it requires access to the Volusion API, a feature available only to merchants using Volusion’s Gold plan and above. A similar process is required for use with MySpace.

Here is an example of Social Store Builder on Facebook for Panna Dolce, a baking goods etailer. 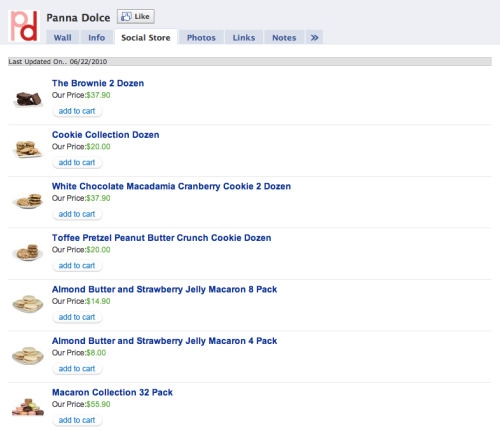 Example of a Volusion Social Store Builder on Facebook.

Social Store Builder’s functionality is limited to the “add to cart” button. There is no option for social sharing, a feature that would seem only logical to include, given the environment. 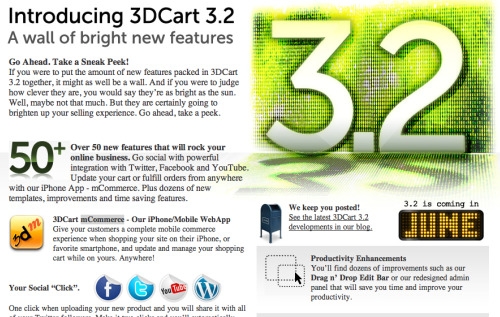 3DCart’s soon-to-be released version 3.2 will include SocialCommerce, which will offer both social commerce features and mobile ones, too.

Similar to customers of BigCommerce and Volusion, 3DCart users can integrate their online stores within tabs on their Facebook fan pages. SocialCommerce will automatically match the look and feel of customers’ ecommerce sites and allow for additional customization, as well.

3DCart merchants can automatically feed products into SocialCommerce by selecting:

SocialCommerce separates itself from SocialShop (BigCommerce) and Social Store Builder (Volusion) in three respects. First, it facilitates one-click posting of products to Twitter and Facebook. It also gives merchants the ability to integrate YouTube videos on product pages with a single click. And, it enables Facebook members to become affiliates in that they can “create their own online stores within their Facebook profiles and choose which products will be displayed,” according to a post on 3DCart’s blog. SocialCommerce will automatically add the appropriate affiliate tracking code and affiliates will automatically get credit for any sales.

3DCart says anyone can click on a product to see photos and details without leaving Facebook, though that was not my experience when testing its store in this example. 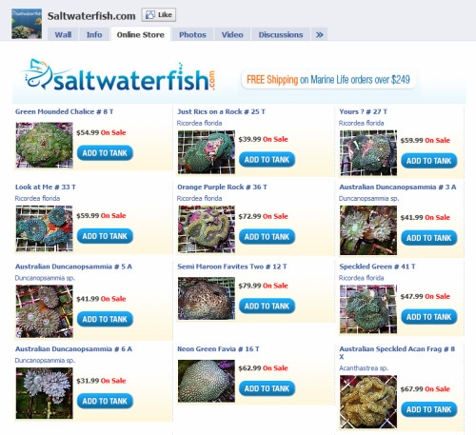 SocialCommerce can be added quickly and requires no special programming skills. 3DCart offers it to all of its customers.

These three apps are little more than fancy photo galleries that link back to merchants’ ecommerce sites. But they enable these merchants to offer their products on social media sites in a seamless manner without any additional coding, keying or manual uploading. And, by forcing consumers to buy from their ecommerce sites, versus directly on Facebook, merchants avoid managing multiple sales channels, which typically requires further automation and order management assistance.