Social media users connect with companies on sites like Facebook to learn about new products, find exclusive offers and contests, or just play games, according to a new survey of about 1,300 consumers. Consumers also have high expectations for online customer support.

The Chief Marketing Officer (CMO) Council, which facilitates the exchange of marketing ideas, and Lithium, a social media marketing company, partnered to survey both social media users and social media marketers in an effort to better understand how consumers use social media, as well as learn why consumers engage and what they expect from the companies they engage with. The study is called “Variance in the Social Brand Experience.”

For interested ecommerce marketers, the survey’s key findings may be that “consumers say they engage with brands through channels like Facebook and other social networks largely to learn about new products, enter unique promotions or contests, or to play games offered specifically, and often exclusively, through these channels.” 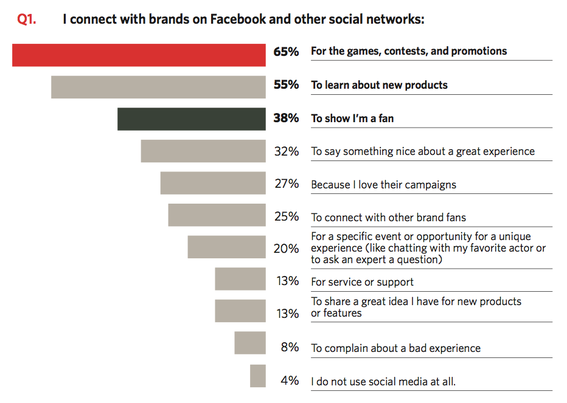 When asked about what kinds of engagement they expected from business on Facebook specifically, survey respondents wanted to be eligible for exclusive offers (65 percent), to be able to interact with other customers (60 percent), and to be able to find “games, contests, and other unique experiences” (57 percent).

It is noteworthy that the same 32 percent of those surveyed engaged with companies via social media in order to praise those businesses. Another 38 percent wished to show — presumably to their peers — that they were a fan of those companies.

Meanwhile, only 8 percent of the CMO survey respondents said that they engaged to complain about a bad experience with the business.

How to Customers Communicate

The survey also asked respondents to specify how they communicated with companies. This question is timely as many online retailers seek to use social media as a means of improving customer service and boost response times. 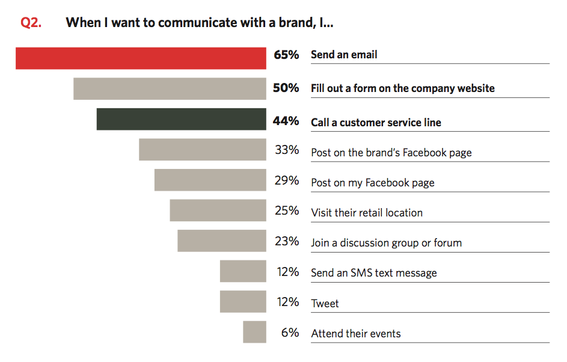 Email, web forms, and customer service phone lines were the most popular forms of direct engagement according to the survey. Graphic courtesy of CMO Council.

Email and web forms — which are essentially email — were the most popular form of customer communication, according to the survey findings, with 65 percent and 50 percent of respondents, respectively, saying they used one or the other.

Some 44 percent of those surveyed said that they called into a customer service line; 33 percent chose to post on the business’s Facebook page.

The survey allowed shoppers to choose more than one answer, and from the numbers — 65 percent, 50 percent, 44 percent, and similar — it is clear that many if not most of those surveyed chose more than one way of contacting a business. This could be an indication that those consumers were either not getting a quick response to their inquiry or they had expectations that they might not get a quick response, thus those individuals felt the need to email, call, and post on social media, seemingly in the hope that one of these communication channels would work.

When asked how long it should take a company to respond to a customer service related communication, some 22 percent expected an immediate response and 19 percent expected that response within an hour. Thus, a full 41 percent of those surveyed believed a business should respond to a customer service question in an hour or less. What’s more 46 percent of those surveyed said that “great customer support online” was their basic expectation from the companies they engaged with.