With the holiday gift-giving season just around the corner, product reviews take on added importance. While common sense would seem to indicate that merchants should strive to achieve nothing less than five star reviews, recent research shows that is not the case. The probability of a consumer purchasing a product doesn’t necessarily increase at a linear rate as star ratings increases.

Survey results show that consumers are suspicious of five star reviews, believing them to be fake. That’s true whether the review is on Yelp, Amazon, Google, or the merchant’s own site.

Don’t Aspire to All 5 Star Reviews

According to survey results, when a product has a rating between one and about three stars, there is little effect on purchase decisions. A shopper is more likely to purchase a product with a four star rating than one with three stars.

Shoppers don’t believe that all five star reviews are authentic. A few negative reviews combined with positive reviews actually have a beneficial effect because they bolster review legitimacy and consumer trust.

Where Ratings Matter the Most

The study found that star ratings are especially important for expensive products as they are considered riskier purchases. This is also the case for newly issued products and for goods where safety is a factor.

For example, several years ago, many babies in China died from adulterated locally produced baby formula. After that, families flocked to the Internet to find western brands that were considered safer, since foreign brands were not available in Chinese stores. Parents would not buy formula that had a low star rating or negative comments. Baby products are some of the most carefully researched items both online and in stores and parents rely heavily on ratings.

Following are reviews of a baby formula that received reviews covering price, taste, and ability to digest. The one star rating was not related to the product’s quality and might not be relevant to many consumers. 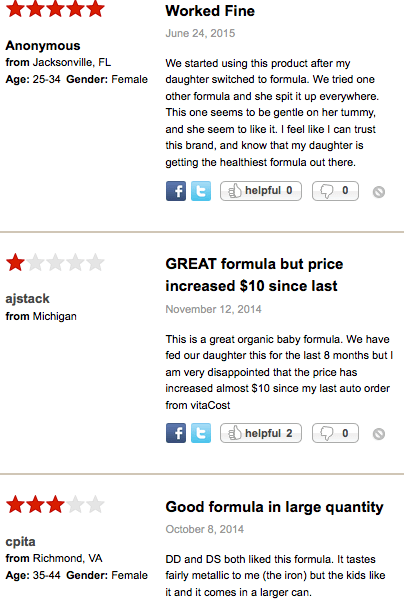 Baby products are usually researched heavily, as indicated by these reviews.

The comments in negative reviews can be constructive and helpful both to consumers and to merchants.

Buying clothing or shoes online is always dicey. With online reviews, consumers can find out if garments are tight or loose and if shoes are narrow or wide or run small or large. A customer may give a pair of shoes two stars for being too small for the size noted — necessitating a return — but that remark warns other shoppers to order the next size up. That saves the seller added costs from returns. 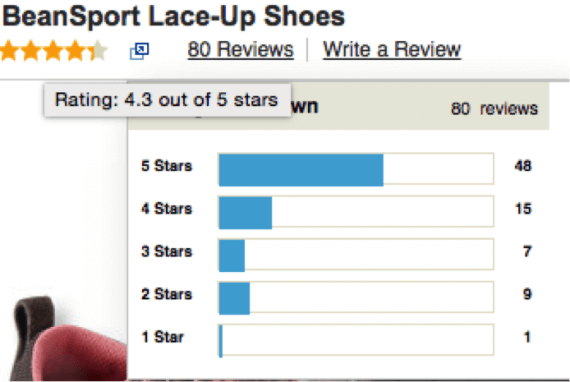 Lower ratings — 1 star or 2 stars — can be helpful to shoppers and to merchants. Source: L.L.Bean.

Responding to negative reviews politely can help your public image. Take the high road and don’t argue with the customer who made the negative comments. You can offer an explanation if you feel the customer is incorrect. But if your company was in the wrong, admit it, apologize, and try to remedy the situation.

Purchase likelihood peaks when the average star rating of a product is between 4.2 and 4.5 stars…

Reviews can both drive conversion and provide valuable insights for merchants.

Shoppers have come to rely on reviews for online purchases so it is important to gather enough reviews to mitigate perceived risk. Remember to send post-purchase emails asking customers to review the products they just bought.

Matt Moog, CEO of PowerReviews, recommends sending the email four weeks after the product is delivered. Make it easy for customers to provide feedback by providing a template. The form should be mobile friendly. Ask for comments, not just star reviews, and don’t hide negative reviews. Moog points out that a majority of shoppers actively look for negative comments.

Moog says he is a proponent of tags such as “pros,” ”cons,” and “best uses” to guide consumer comments. He suggests entering customers who submit reviews in a sweepstakes to boost the number of reviews.

If comments are brief you will need a larger quantity of reviews to instill confidence in consumers.

If you have a new product that has not yet been purchased from your site, obtain syndicated reviews from the manufacturer and use those until your own reviews come in, according to Moog. Another route is to offer product samples to individuals for their review and have them write reviews with a disclosure statement.