Facebook commerce has a long way to go before it’s on par with traditional ecommerce. But many ecommerce merchants report that Facebook Ads, a self-service, pay-per-click advertising platform similar to Google AdWords, generates positive returns. In this article, I am going to outline the details of running a Facebook advertising campaign and provide helpful tips to improve its effectiveness. 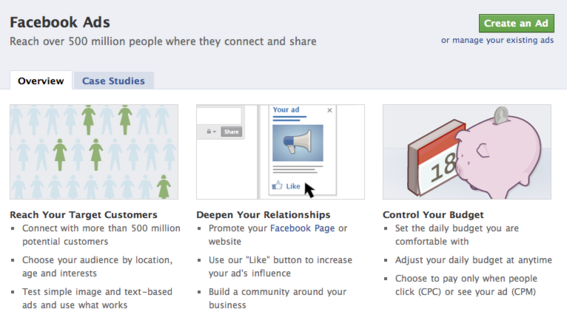 Facebook Ads come in two forms: Premium and Marketplace. Premium Ads are reserved for those companies that have lots of money to spend — at least $10,000 monthly.

For the rest of us, there are Marketplace Ads, which can cost as little as $1.00 per day. These appear in the right-hand column on pages throughout the site. (In order to alleviate “banner blindness,” Facebook has moved ads to the right-hand border on user profiles so they appear to be more a part of the profile itself.) Facebook Ads allow merchants to advertise either a destination within Facebook such as a Page, Event, Application or Group, or a separate website.

Facebook recently introduced a new type of ad unit called Sponsored Stories, which are ads that companies — only Premium advertisers, currently — can purchase that will show up to the right of a user’s news feed and let users know when their friends either (a) “Like” a company’s product, (b) check-in at a company’s location via Facebook Places, or (c) post a comment on a company’s Facebook page. This approach has sparked controversy with some, as a Facebook user’s Likes can appear in a news feed, whether the user approves or not.

There are three main steps to creating a Facebook Ad campaign:

Just like advertising on any other channel, running a campaign on Facebook requires that the merchant first know what goals he wishes to achieve. These may include goals such as: increasing Likes on the company’s Facebook page, increasing traffic to the ecommerce website, building brand awareness, selling products or generating leads.

The best way to use Facebook Marketplace Ads is to create one advertising campaign per stated goal. Here is an example of a smaller online retailer who had two goals in mind: (a) get more Likes to the company Fan page and (b) sell products. The retailer created separate campaigns to match each goal, each with its own series of ads.

Target the Audience You Want to Reach

One of the benefits to using Facebook advertising is its ability to create highly targeted segments. Very often, the narrower the target the more effective the campaign becomes. In the past, I have created campaigns targeted to a little as a few hundred people.

Thanks to the amount of information supplied by Facebook users through their profiles, more demographic data is available to advertisers than in any other advertising channel, including Google AdWords.

One key to running a successful advertising program is to tailor different ads to reach individualized segments. Facebook offers targeting based on the following parameters:

Depending on the goal of the campaign and assuming the merchant has a Facebook page, a couple of targeting options I often choose are: Facebook page Fans, and friends of Fans. (Facebook will not allow you to choose both categories in the same ad.)

Friends of Fans are one targeting option for ads.

Once targeting options have been selected, Facebook will list an approximate number of people the ad will reach. Keep in mind that only those included in that number will ever see the ad. In terms of minimizing wasteful spending, this is an attractive factor.

Create Your Ad and Set Your Budget

Facebook Ads is a self-contained, self-service, bid-based advertising system. If a merchant is used to running pay-per-click ads via Google AdWords or Yahoo! Search Marketing, this will feel somewhat familiar. My experience is that Facebook Ads is a much less complicated system than the other two, which I appreciate.

To create an ad, merchants need to:

Facebook Ads look very similar to Google AdWords with a couple of exceptions: (a) there is room for more text in the body, and (b) the use of a thumbnail image is permitted. Facebook Ads consists of a title, body copy, a destination URL that is hyperlinked from the title, and the aforementioned image. (Facebook Ads allow the same amount of characters — 25 — for the title as Google, but permits up to 135 characters for the ad itself, versus the 70 characters allowed by Google.)

If a merchant is promoting the company Fan page, Facebook’s policy is to use the name of the page as the title. When choosing that option, be aware that the ad platform will not allow you to change the title. In terms of creating interest, I find this limiting, as most Facebook pages simply list the name of the company as the page title.

As an alternative, you can create the ad to direct users to a site other than the Fan page, then include the link to the page URL. That provides the ability to create a title that is more engaging and interesting. One drawback to doing this is that you lose the social actions aspect of ads — the Like button — that is included when ads that promote the Fan page are auto-generated by Facebook. 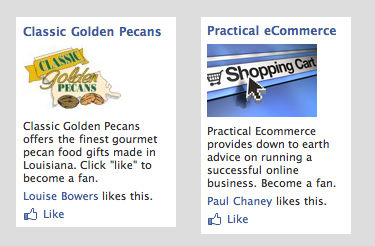 Name Your Campaign and Set Pricing

There are some terms with which you need to be familiar before creating an ad campaign.

Submit Your Ad for Review

Once the ad has been created and you click the “Submit” button, it is reviewed by Facebook to confirm it meets the site’s Advertising Guidelines. Only on a few occasions have I had an ad be disapproved. Nevertheless, it is worthwhile to acquaint yourself with the guidelines.