Social media, like any other marketing channel, has to prove itself as a customer acquisition, retention, and sales tool. Analytics is one way to make the case for whether it accomplishes that goal or not.

Facebook, LinkedIn, and Pinterest all provide analytics for page owners and advertisers; all track activity for both organic and sponsored posts.

Earlier this month, Twitter announced that it had joined the ranks of these other networks and now includes analytics data for organic posts in its dashboard. Previously, such metrics were available only for Promoted Tweets, Promoted Accounts, and Twitter Cards.

“Starting today, you’ll have a new tool in your arsenal: we’re rolling out an enhanced Tweet activity dashboard to provide measurable insights into how your organic Tweets perform,” said the Twitter announcement. 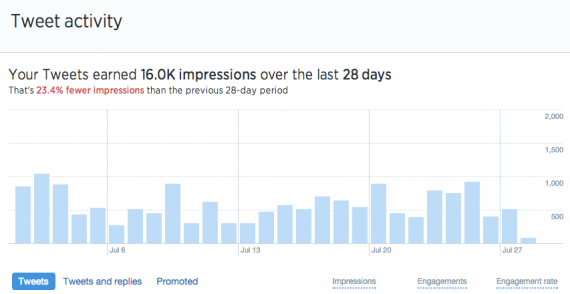 Track the activity of organic tweets using the new dashboard.

Business users can compare how many times a tweet gets viewed by others on Twitter, and see how many retweets, replies, favorites, follows, link clicks, and embedded media clicks each Tweet received.

Twitter presumably hopes that having a better understanding of how posts perform will lead users to promote some of them as ads.

Track Followers. Explore the interests, locations, and demographics of followers. 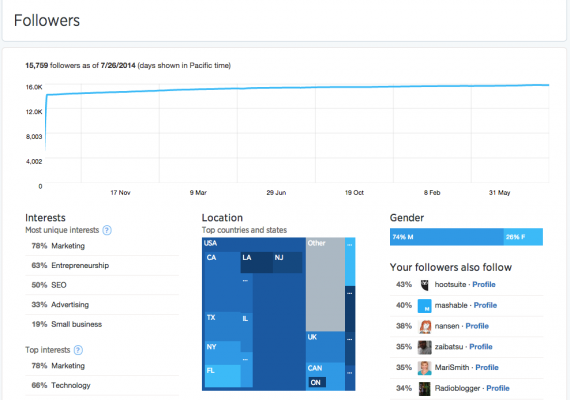 Users can export Tweet performance metrics into a CSV file, which now includes both organic and promoted data.

Once you gain access to the new Twitter analytics, try these posting best practices to see how they affect growth.

Due to tweets’ short-lived nature — a tweet posted this morning will be long forgotten only a few hours later — consistent posting multiple times per day is necessary to stay top of mind with users.

Only include them only when it makes sense to do so such as in a retweets of their content or in response to something they have posted, which you amplify with comments of your own.

Does a tweet containing a quote work better than a product-related post? Does the inclusion of a photo or video result in higher levels of engagement than posts that do not include them?

These and other questions are what the new analytics dashboard will help answer. It may help make Twitter a useful weapon in your social media marketing arsenal once and for all.