For today’s ecommerce merchant who wants to convey an important point via instant messaging or mobile texting, brevity is helpful. But when the merchant is using Twitter, brevity is a must since a Twitter post is limited to 140 characters. It’s easy to run out of space to enter the most important information, which is a link back to his or her site.

If a merchant wishes to share a link (perhaps to a product page), the merchant can simply enter his or her URL in the toolbar of a shortening service, click “enter,” and have a much shorter URL that can be disseminated to potential customers.

One of the most-used URL shortening services is TinyURL. TinyURL was created before Twitter existed, with the goal of creating shorter URLs that wouldn’t break in email postings.

The screenshot below from TinyURL’s front page shows an example of a lengthy eBay product URL before and after being entered into TinyURL’s toolbar. 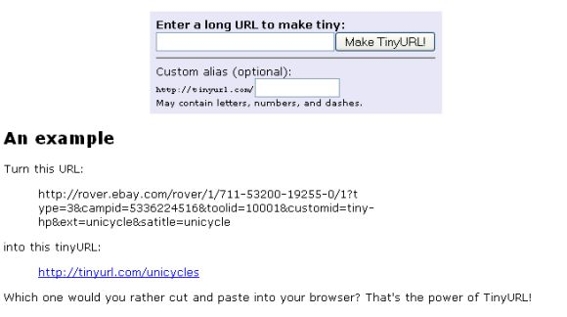 As mentioned, however, TinyURL was created before Twitter, and much has changed since then. Namely, space is at an even higher premium.

Take, for example, Bit.ly’s “Sidebar” bookmarklet. A merchant can simply drag the tool into his or her toolbar for use at any time. Not only does it allow the user to create shortened links but to immediately post them to Twitter and get real-time statistics on how often the shared-link has been clicked. For ecommerce merchants who want to know if their social media efforts are paying off, this can be a valuable tool. 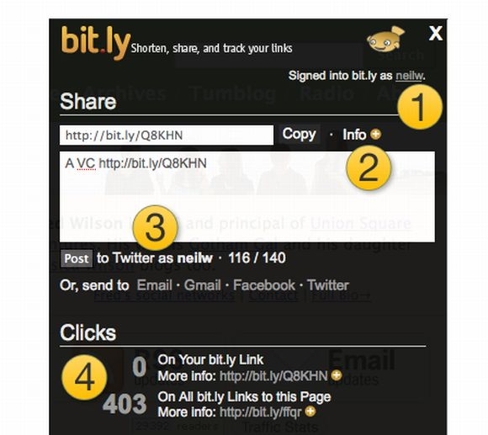 Additionally, Ow.ly, when integrated with the free HootSuite social networking application, allows users to upload photos and text-based documents which can then be identified by a short URL in Tweets.

As has been recently reported, Google and Facebook have also recognized the importance of URL shortening and have introduced their own services.

The “Official Google Blog” quotes Google software engineers, Muthu Muthusrinivasan, Ben D’Angelo, and Devin Mullins, as saying, “People share a lot of links online. This is particularly true, as micro logging services such as Twitter have grown in popularity. First, we think people who use the Google Toolbar and FeedBurner will benefit from a shortener that is easily accessible—making it faster and easier to share, post and email links. Second, we’ve built this on Google’s global infrastructure to offer several benefits . . .” including stability, security, and speed.

Google’s and Facebook’s shortening services, however, are currently only aimed at their own products.

A Downside to Shortened URLs?

Ecommerce merchants who want to shorten URLs can easily utilize several available services. Keep in mind, however, that merchants wanting to track click-throughs on those links will need to use newer services like Bit.ly and Ow.ly. Keep an eye on Google and Facebook as they, too, appear to be eyeing the URL shortening market.

TinyURL is a free service that pre-dates Twitter. It does not provide tracking.

Bit.ly is a shortening service that provides tracking free of charge.

Tr.im is another shortening service. It too provides free tracking.

Ow.ly is a free shortening service that is also integrated with the HootSuite social networking application. With HootSuite’s free services you can not only shorten URLs but upload images and text-based documents which can be posted via a short URL. HootSuite offers tracking services and Tweet scheduling so your company can automate its Tweets.

Cli.igs is a free shortening service which offers tracking and a unique feature: Geotargeting. Cligs claims to be the only URL shortener which can provide alternative destinations URLs that different visitors from different countries are forwarded to. This service is targeted at merchants offering localized promotions or affiliate marketers that want to get the full value from each click. For example, a U.S. company promoting a product via Amazon would be able to ensure that a United Kingdom consumer would be forwarded to Amazon.co.uk. Without the geotargeting feature, the consumer would simply be taken to the U.S. Amazon link. The consumer would likely edit the URL manually, ensuring that the marketer would get no credit for the potential sale.