Twitter announced its new polling feature in October and quickly rolled it out across the desktop site, mobile site, and mobile app.

Coming soon! We’re rolling out the ability for everyone to create polls on Twitter: https://t.co/pH5a8q9Ujz pic.twitter.com/ijAKEMUdf1

Twitter polls allow you to ask quick questions of your audience members, who can answer anonymously within 24 hours of the poll being tweeted. Each poll consists of a single question with up to four response options. Once a user has selected an answer, he receives live poll results, to compare his response. After the 24 hours, the poll is closed and the full results are made public.

Prior to polls, users answered questions on Twitter by directly tweeting, or by retweeting or favoriting a post to indicate the response. The advantage of this kind of vote is that the reach of the original post increases as users answer. But it can also be a drawback, as many users will avoid tweeting their answer publicly.

With Twitter polls, all responses are anonymous; there is no signal to your followers that you have participated in any poll. One advantage of the Twitter poll format is that the poll itself is embedded directly in tweets rather than within a card that users have to click to open. This makes polls eye catching when scrolling through a feed.

Creating a poll is easy. Simply choose the pie chart option when composing your tweet and enter your response options in the fields provided.

Ecommerce brands are slowly adopting Twitter polls. Most brands focus, instead, on images and animated GIFs to attract attention to their tweets. Aldi Stores, for example, continues to use the retweet-reply-favorite convention when posing questions. This format offers enhanced visual appeal in addition to the potential for increased reach, something that is lacking in the new poll format.

However, many tech brands — such as Buffer, the social-scheduling app — are experimenting with the new format. 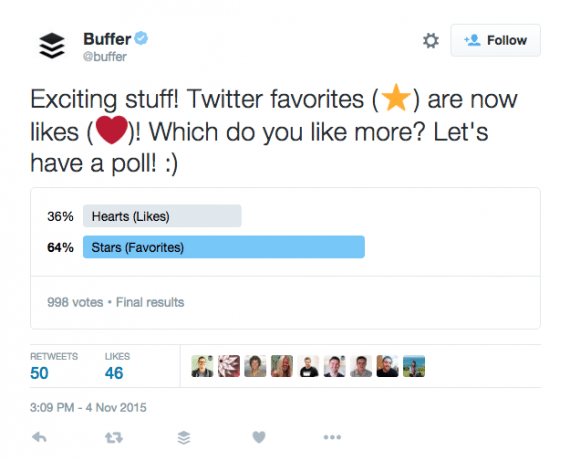 Sports and entertainment brands — such as Entertainment Weekly, the National Hockey League, and the Dallas Cowboys — have also posted Twitter polls.

There are many ways that ecommerce companies can use Twitter polls. Here are few suggestions.

Will you be adding polls to your Twitter strategy?