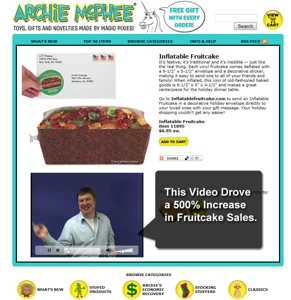 With the holidays ahead, and a new inflatable fruit cake product selling only sparsely, Seattle toy store Archie McPhee this week is setting out to drive online sales with an explanatory video. It’s apparently working.

Within 12 hours of launching the video ad campaign, sales for the $6.95 blow-up novelty at ArchieMcPhee.com jumped 500 percent, said David Wahl, director of marketing and host of the viral instructional video.

“I used a five-year-old digital video camera and movie editing software that came with my Macintosh; it’s definitely not state-of-the-art equipment,” Wahl said. “Most of it’s just creating something that’s interesting that people want to enjoy and share with other people. It just drove a lot of people to the page.” And, most importantly, it drove sales.

His ecommerce site is certainly not alone in benefiting from video usage. Some 8 percent of the 2.7 billion video ad impressions studied by DoubleClick (a digital-marketing-technology firm now owned by Google) generated a user interaction. Meanwhile, video raises the number of sales for featured products 30 percent on average, according to testing performed by Innovate Media, a California-based online video production company. “We’re seeing client after client with incredible video conversion rates, ranging from 12 percent to 115 percent with the average being 30 percent,” said Innovate Media President John Cecil. 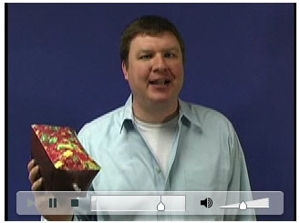 Indeed, the question for ecommerce merchants isn’t whether video works to drive conversions, but how to overcome production aspects, which is the biggest barrier for the average online seller.

Until now there have been very few resources for actually producing the videos,” said Cecil, whose firm charges $1,000 to $50,000 for production of online videos. “Most of the merchants delivering videos to agencies for distribution aren’t producing it ‘lights, camera, action’ themselves. They come to video production houses like ours with the product they want to sell online, and we produce a video around it. Then, once we started talking about production and delivery in the same breath, it totally changed our business.”

Getting up to speed

In the words of legendary songwriter Bob Dylan, “the times they are a-changin.” Instead of chunky loading and spotty audio (a complaint of early online video users), 94 percent of today’s online window shoppers use browsers to play video in near-real time, according to StatCounter data.

“Any ecommerce site can use a free hosted video platform to help promote their offering and drive users,” said Gaude Paez, spokesperson for Veoh Networks. A free video hosting community, Veoh has 4 billion video views a year and behavioral targeting in beta phase. “We have a lot of publishers that host on Veoh that are promoting products, services or driving traffic back to their site.”

Veoh is one of scores of quickly-streaming video hosting sites that are free and information-seeker driven. Couple that with free tools like Tubemogul.com, which auto-submits single videos to 21 sharing sites (plus your own), and hosting videos online is no longer cost-prohibitive to e-merchants. Free video hosting is a preferred option for the bootstrapper, saving $20 or more per month in video hosting fees from private servers.

As for production costs, “with a $50 webcam and an Internet connection, you’re good to go,” said “The Online Video Guy” Lou Bortone, author of the ebook “Webcam Buying Guide and Videotaping Tips”. “Video is a great way to market on the Internet. Online viewers are a lot more forgiving and lenient if your video is not broadcast quality. To do something upscale, spend a few bucks and have it done professionally. That being said, there’s a lot you can do with inexpensive editing software and a little creativity.”

Video editing software now is bundled with most computers and webcams. Other options include CyberLink’s award-winning PowerDirector 7 Deluxe ($69.95), such freebies as JahShaka, or Adobe’s news-broadcast-like Vlog It! ($29 for the PC). “You can add lower-third graphics, pictures and audio, and quickly record a video with an intro, music and interactive graphics,” Bortone said. “It’s pretty easy.”

More About Video To Come

Stay tuned to Practical eCommerce as we bring you this “Video for Ecommerce” Special Report that spans three parts published within the next few weeks. You’ll find real stories of how ecommerce sites are creatively using video in their marketing to drive sales and grow their brands. We’ll introduce easy production ideas, and bring you the latest innovations in video equipment, software and services for getting any ecommerce site online with powerful product-selling videos.