Your Content Marketing Is a Joke (Or It Should Be)

Editor’s Note: Meet Armando Roggio at Ignite 2015, our conference on Sept. 16 and 17 in Dallas, where he’ll co-present three sessions: “How to Build an Ecommerce Brand (and Reduce Reliance on Paid Traffic),” “Content Marketing Essentials: Attracting and Engaging Shoppers, for Higher Conversions,” and “Ecommerce Opportunities for Brick-and-mortar Merchants.”

Content marketing helps many companies attract new customers, build lasting relationships with existing customers, and sell more. If your company is using content, but not experiencing growth, try making your content more of a joke.

As a somewhat extreme example, consider the Dollar Shave Club’s “Our Blades are F***ing Great” video released in March 2012. According to published reports, the company got 12,000 new monthly subscribers within just 48 hours of posting the video on YouTube.

At the time of writing, the video had more than 19.6 million views on YouTube alone, so it may be safe to assume that over time this particular piece of content generated even more interest in the company, lots of additional traffic to the Dollar Shave Club website, and, perhaps, a great number of paying subscribers.

So how is it that a video about low-cost, disposable razors could do so much to grow an ecommerce business? The answer is humor. The video is funny. But this assessment leads to a second, harder to answer question. Why is it funny?

The Benign Violation Theory of Humor

The “Our Blades are F***ing Great” video might be funny simply because Dollar Shave Club used one f***ing word and created a benign violation.

Seeking to integrate several humor theories and building on work from linguist Tom Veatch, the authors of the book The Humor Code, Caleb Warren and A. Peter McGraw, developed the Benign Violation Theory of Humor to explain why folks find things funny. This theory suggested that something is funny (humor occurs) when and only when three conditions are present — when the situation being described is perceived to be: 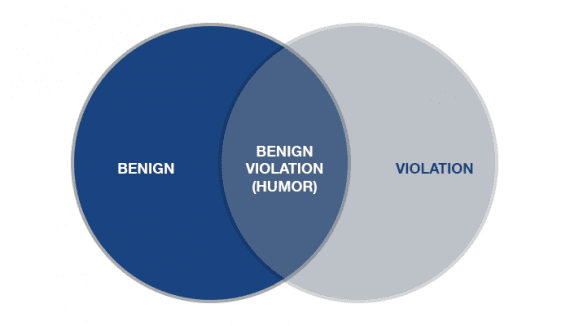 When folks encounter a benign violation, humor is usually the result.

“The first thing that you learn when you study humor is how important it is, “said McGraw in a video about how to be funny. “That it’s just an essential part of the human condition. It’s something that people pursue in their leisure life in their relationships, and it ends up being a really great tool.” 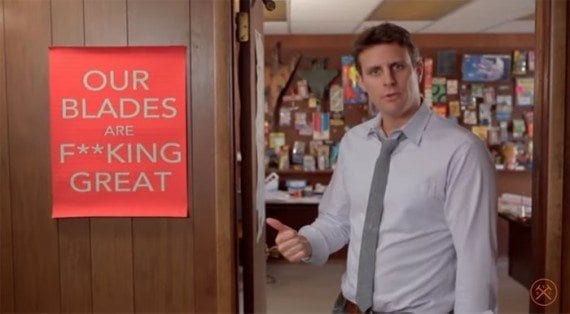 The Dollar Shave Club used foul language to create a benign violation that many shoppers thought was funny.

Returning to the Dollar Shave Club video, using what many folks consider to be foul language in a professional commercial violates shoppers’ understanding of what is both acceptable and legal in commercial content. This violation of commercial etiquette is also very safe for the person watching the video, thus a benign violation.

Dollar Shave Club repeats this concept elsewhere in the video too. For example, as Dollar Shave Club CEO Michael Dubin is saying of his company’s product, “It’s so gentle a toddler could use it,” the viewer is shown a toddler apparently shaving a man’s head whilst he reads a copy of Eric Ries’ book, The Lean Startup. 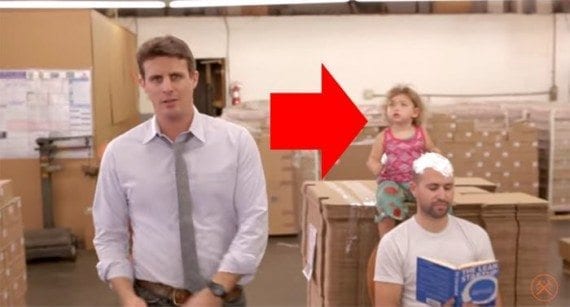 Allowing a toddler to use a razor is also a benign violation.

Here again, there is a violation from expected behavior — like letting a toddler play with a razor — that is safe for the viewer, and, therefore, funny and memorable.

“What is the Dollar Beard Club?” asks company co-founder Chris Stoikos just six seconds into the video. “Well, you sure as hell won’t be receiving any f***ing razors from us to demolish your manhood.” The last part of the phrase is emphasized when Stoikos slaps another guy who was shaving.

After describing a couple of the things that bearded men are busy doing — like riding motorcycles or “swimming in a box full of women” — Stoikos suddenly appears shirtless or no apparent reason, creating a series of benign violations in a video promoting beard oil. 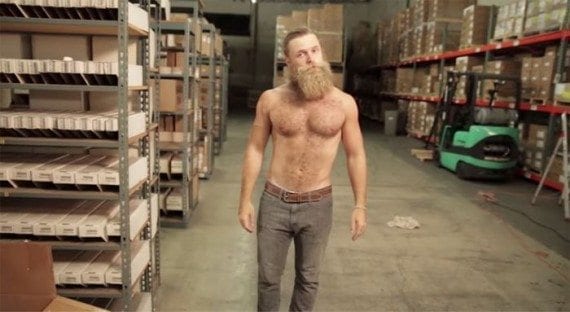 Not wearing a shirt whilst pitching your products may also be a benign violation.

As a third example, consider the September 2013 “Girls Don’t Poop” video from PooPourri, which has received more than 33 million views on YouTube.

This video is funny and memorable because it violates, if you will, how viewers expect someone to talk about using the restroom.

Using bad words and making potty jokes are not the only ways to use the Benign Violation Theory and humor in your content marketing. In fact, in spite of the aforementioned examples from the Dollar Shave Club, the Dollar Beard Club, and PooPourri, one would hope that you won’t start using foul language in your content. But do consider writing funny posts or creating funny videos.

The first step toward trying to use humor may simply be trying to use humor — intentionally interjecting benign violations into your regular content. The aim is not necessarily to make knee-slapping comedy, but instead use humor to make your content more fun to watch and relatively easier to remember.

Consider this final example from Cisco, which is more restrained in its humor, but is still a good example of taking what some folks might consider to be a dull topic and making it interesting.