Consumers Search by Voice. Do You Listen?

The future of search is, increasingly, spoken. At its annual I/O conference earlier this month, Google made 100 announcements. More than 20 related to voice interaction. (Many others involved visual search.)

The most natural user interfaces treat technology as a conversation with another person. Voice will comprise 50 percent of all searches by 2020, according to market research firm comScore. Even today, half of smartphone users search via voice. One-third use voice search daily, according, again, to comScore.

As many as one in six Americans own a smart speaker such as Amazon’s Alexa or Google Home, according to market research firm Edison Research. An astonishing 7 percent of Americans purchased a smart speaker in the winter of 2017 or received one as a gift.

However, comScore found that Americans are still wary of making purchases entirely by voice due to the inability to see product details and the potential for incorrect orders based on poor voice interpretations.

U.S. consumers are resistant to complete purchases on smart speakers. The reasons include the inability to see the products (45 percent) and fear of order errors (44 percent). Source: comScore. December 2017.

Most retail voice searches today are likely on Alexa, with its tie into Amazon’s enormous catalog of products.

Google has developed a commerce model for retail via smart speaker called Google Express. This enables Google Home users to order items from a multitude of retailers, including Walmart, Target, Home Depot, and Costco. Google has issued an open invitation to join the program, under its “Google for Retail” umbrella, called Shopping Actions.

Express currently has limitations, such as the $100 cap on items purchased through Google Home. But Google’s commitment to voice search (and conversational technology) make it easier to imagine a near future with no artificial limits.

Regardless, voice commerce is coming quickly. As more consumers rely on voice search, they’ll feel confident in ordering online. There will then be no stopping them from using voice as a means of acquiring more of everything.

To win voice results, understand how consumers search. With a typing interface, two- to three-word search queries make up most searches. But voice searches are longer — typically four or more words.

It makes sense. We don’t speak to each other in bursts of phrases, and it’s awkward to formulate speech for a device.

The content that wins those searches tends to be longer as well. While Google provides concise snippets as answers to voice searches, the winning page typically contains many more words. The voice result — 29 words on average — is usually a small piece within a much longer content page containing on average 2,312 words, according to a study of search results on Google Home devices by search optimizer Brian Dean of Backlinko. 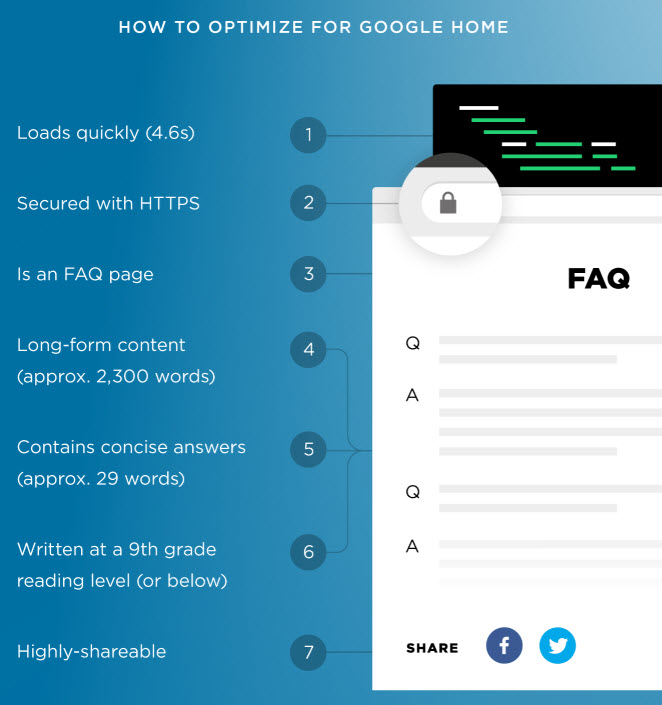 Interestingly, structured (schema) data was only present in 36.4 percent of voice search results. Search engine professionals would typically expect this to be a higher percentage based on the tie between featured snippets and schema structured data.

As is typical with winning any search results, domain authority plays a major role in winning voice search results, which have an average Ahrefs Domain Rating of 76.8. The more high-quality links a site has, the better it tends to rank.

One would expect to see title tags in this list. Very interestingly, the search query was matched to the words in the title tag in only 1.7 percent of the cases. In other words, do not run out and generate hyper-optimized pages to answer every individual question that you’re likely to find in keyword research. Google considers this a doorway strategy, anyway, and will degrade its value.

Page speed and HTTPS both appear to impact voice search results. On average, pages that win voice searches load 52 percent faster than average; and 70.4 percent are secured with HTTPS. This is higher than typical with desktop search results and points to the higher expectation of instant gratification with voice searches. In a conversation, you wouldn’t expect participants to sit silently for 20 seconds thinking about an answer. The same is true of voice search results.

There’s much data pointing to the growing importance of voice search. Retailers in my experience tend to change their digital and search strategies slowly. The priority has to be selling products. Gaining internal approval (and resources) can be an obstacle. Thus now is the time to start planning for voice search.

Start with optimizing content for the 2018 holiday season, when searchers will use their new smart speakers. You can capitalize on those bleeding edgers who are ready to try voice commerce. This trend is inevitable. Voice search will happen.