One economic sector’s implosion is another sector’s lucky break. Physical store closures are disproportionately occurring in the apparel category, pushing more consumers to online clothing shopping. Seizing the opportunity for more online sales, Walmart has already made several apparel ecommerce acquisitions in 2017. The strategy behind these purchases is to better compete with an ever-expanding Amazon.

In January Walmart bought Shoebuy and in April Shoebuy purchased the shoes.com domain from a defunct Canadian company. Jet.com — which Walmart acquired last year — manages Shoes.com. The Shoes.com site competes against the popular Zappos.com, acquired by Amazon in 2009.

None of these sites would attract the typical Walmart shopper, who values low prices and bulk purchases. So Walmart decided that merchandise from Modcloth and Bonobos would not be sold in Walmart stores or on Walmart.com, but rather only on jet.com. This confirms that the reason for purchasing Jet.com had more to do with acquiring wealthier, younger, and more fashion-conscious customers than getting better technology. Walmart could not expand in this direction without Jet.com because its in-store customer profile is older, lower income, and not particularly interested in cutting-edge fashion.

Conversely, people who will shop for these apparel products on Jet.com are typically not Walmart customers and would probably not want to shop at a site or store with the Walmart logo. Downplaying the Walmart connection is a shrewd move but it does not guarantee success for the acquired companies. There is a danger that existing Modcloth and Bonobos customers will perceive a degradation of the brands and might abandon them.

Quoted in an August Los Angeles Times article, Modcloth customer Connie Warner stated, “The thing I loved about Modcloth is that I knew the clothes I bought there couldn’t be found at Macy’s and weren’t worn by the masses. No more. I’ve unsubscribed from their emails. I refuse to shop at a store owned by Walmart.” Warner also initiated a “Boycott ModCloth” page on Facebook. 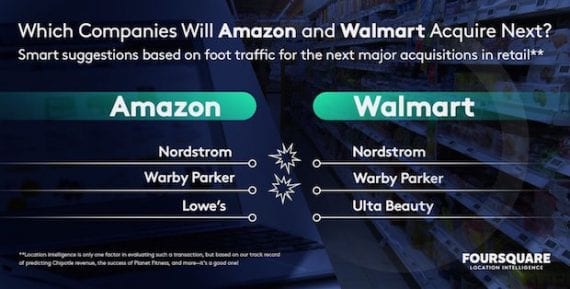 It appears that Walmart and Amazon will continue to compete in the acquisitions war that has been going on all year. Department store chain Nordstrom is considered a target for both. The Nordstrom family, which holds key management positions and owns over 30 percent of the stock, wants to take the company private and has been searching for a buyer. Nordstrom shoppers are, on average, 55 percent less likely to shop at Walmart than other American consumers according to location intelligence technology firm Foursquare. In contrast, Nordstrom shoppers are about two times more likely to shop at Whole Foods than the average consumer. A Walmart owned Nordstrom might be too much for the average Nordstrom shopper to bear.

It has also been reported that Nordstrom family members are looking to private equity firm Leonard Green & Partners for $1 billion in equity to help fund a buyout.

Another potential ecommerce target is eyeglass manufacturer and online purveyor Warby Parker. Foursquare says that 80 percent of Warby Parker customers shop at Whole Foods, so Amazon would be a better fit as an acquirer.

Amazon and Whole Foods both attract younger, higher-income, more selective customers so Amazon has a better chance of success at integrating dissimilar companies in both the online and brick-and-mortar realm. It will be interesting to see how the acquisitions war with Walmart plays out.

In early September, Gap Inc. announced it would be closing 200 Gap and Banana Republic stores. However, the company will open more Old Navy and Athleta stores.

Discount perfume merchant Perfumania filed for Chapter 11 bankruptcy in late August and stated that it would close 64 of its 226 stores. The company stated its intent to reorganize by becoming a private firm and “…more quickly adapt to the shift in consumer shopping habits by focusing more of our resources on implementing our e-commerce strategy….”

Vitamin World, which operates 334 stores, mostly in malls, indicated this month that it plans to file for Chapter 11 bankruptcy while closing 51 stores.

Many malls are owned by REITs that are taking large spaces vacated by anchor tenants and breaking them into smaller spaces. Rather than leasing to apparel vendors, the REITs are focusing on restaurants, small organic grocery stores, and entertainment businesses. Interestingly, these companies are paying much higher rents per square foot than the previous anchor tenants so this may be the way forward if malls are to survive.