Facebook is among the top social media networks in the world. It is also a leading advertising and communication platform. And it could soon dominate ecommerce.

With a few billion monthly active users across Facebook, Instagram, and WhatsApp, Facebook, the company, has the means and, perhaps, the motivation to be a leading ecommerce platform — think Shopify, BigCommerce, Magento, or Miva — and a top-notch marketplace similar to Etsy, eBay, or even Amazon. Facebook already offers an impressive set of ecommerce tools, making it possible to run an online store entirely on the company’s platform. 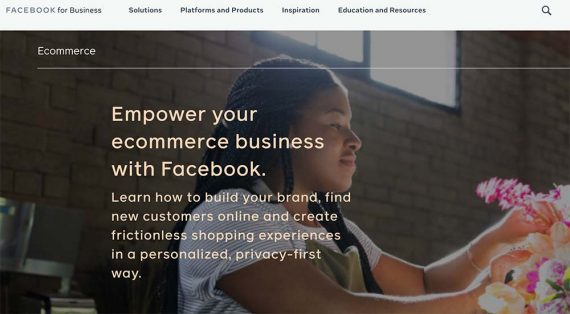 Facebook has an impressive set of ecommerce tools, making it possible to run an ecommerce shop entirely on its platform.

Facebook collects information about individuals in several ways. That includes demographic, psychographic, and behavioral data about users from its own applications. This is a critical point. The more all of us interact on its platform, the more Facebook’s algorithms know about us firsthand.

Before the European Union’s General Data Protection Regulation, Facebook’s social plugins — including its Like button — included a tracking cookie. If a merchant placed a Like button on its product detail pages, for example, Facebook would have a pretty good idea of who purchased from that page. It could use that information to identify similar individuals interested in the same or similar product.

Facebook also collects information from mobile apps. The Facebook Audience Network gives developers a way to monetize their creations with advertising. And until recently, with those ads running on mobile apps worldwide, Facebook also gained the ability to collect data about individual users.

In August 2021, I spoke with an entrepreneur behind a small but successful supplement brand. The company had just one product packaged in a few sizes, and that was enough to generate about $4 million per year in gross profit.

The company’s online store was built on Shopify and featured one-time purchases. The site looked more like a single-page sales funnel than an online shop.

Once a customer made the first purchase, the brand started a well-tested email marketing sequence encouraging her to switch to subscription-based orders. Customer retention was the key to the brand’s strategy.

Here’s the point: Nearly 100% of first-time orders came from advertising on Facebook’s network.

This is common. Many small and mid-sized ecommerce businesses are dependent on Facebook advertising for customer acquisition.

This relationship between online sellers and Facebook Ads has worked, in part, first, because Facebook and its associated apps have a massive audience, and, second, because Facebook has combined its own first-party customer data with data collected via third-party websites and mobile apps to precisely target shoppers who are predisposed to purchase a given product.

In some ways, advertising on Facebook had become nearly automatic. For the past few years, the platform’s targeting algorithms have churned out ecommerce conversions with stunning consistency and affordability.

This ability to drive profitable conversions gives Facebook the means to dominate ecommerce.

It is not surprising then that Facebook is concerned about new privacy trends and their impact on collecting customer data from third-party websites and applications.

Several of the leading web browsers have already eliminated third-party tracking cookies or have announced an elimination date.

The E.U.’s GDPR and similar laws forced Facebook to change its social plugins.

And earlier this year, Apple provided iOS users the option not to be tracked, adding to Facebook’s data collection hurdles.

So what could Facebook do? Encourage users to do more on its platform and not rely on third parties.

Facebook can collect demographic, psychographic, and behavioral data about you and me from its own applications. The more we interact on Facebook, the more info we provide to the company’s ad-targeting algorithms.

Facebook is already making it much easier to sell products on its platform.

The company has shops for Facebook, Instagram, and WhatsApp. It has a catalog manager with capabilities similar to a basic (or even not so basic) ecommerce platform. Its management tools, such as Commerce Manager, are as effective as some ecommerce dashboards. It can host live shoppable videos, which are popular with social commerce. And don’t forget about Facebook Marketplace, where consumers can transact with each other.

In an earnings call last spring, CEO Mark Zuckerberg stated that Facebook Marketplace had 1 billion active users. By comparison, eBay had roughly 185 million users worldwide in 2021. At the time of writing, Amazon reported a bit more than 150 million Prime members worldwide and about 300 million active customer accounts. While eBay and Amazon have more volume, it’s hard to argue against Facebook Marketplace’s opportunity.

Facebook’s advertising ability, concerns about ad targeting, and already-established infrastructure point to its emergence as a leading ecommerce provider. Then again, perhaps it already is.